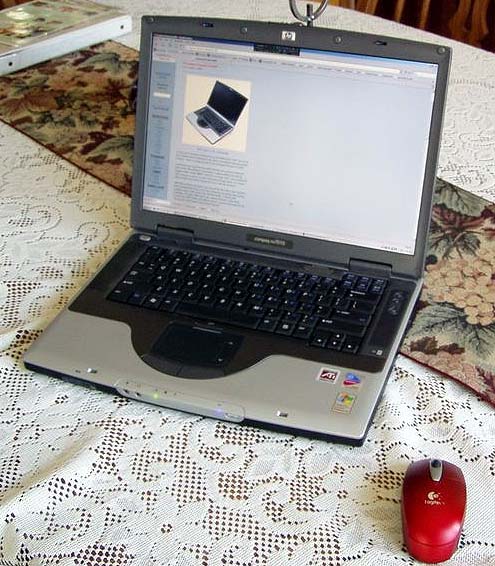 I had previously bought a Compaq X1000 off eBay for about $900 around August 2004; I loved it but always had an itch for something a little bit faster. I recently saw the review of this on Overclockers.com so I thought I would chime in on mine.

Mine was almost identical except for 512 MB RAM and 32 MB RAM on the video card, DVD / CD-RW and a 60 G hard drive. I ended up upgrading to an Intel Pro/Wireless 2200 802.11g wireless network card after some time. As I said, I had an itch for something a tad faster, and the opportunity arose when my brother needed a computer, so I jumped on it.

I picked up the Hp/Compaq nx7010 business laptop right after Christmas from eBay – someone had 3 of them that he was selling – it came with: 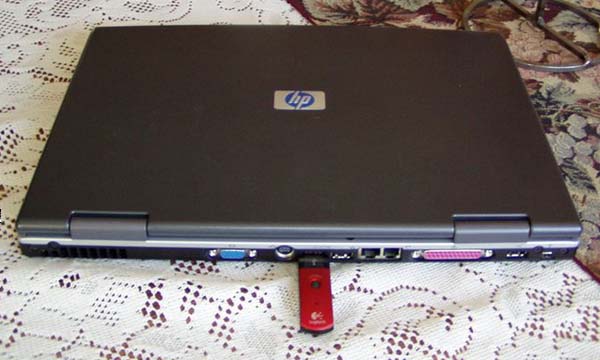 I was looking for this exact setup in either an Hp/Compaq nx7010, an Hp zt3000, or a Compaq X1000, as they are all the same laptop minus a few cosmetic features and the bundled goodies. I was looking for all the specs above; I was debating between WSXGA+ and a DVD burner – I couldn’t have both partially because I couldn’t find a machine with both and it would cost a bit more. This deal arose and I got this for $1300 with free shipping. At retail stores it costs between $1600 and $1700, so I got a small discount. 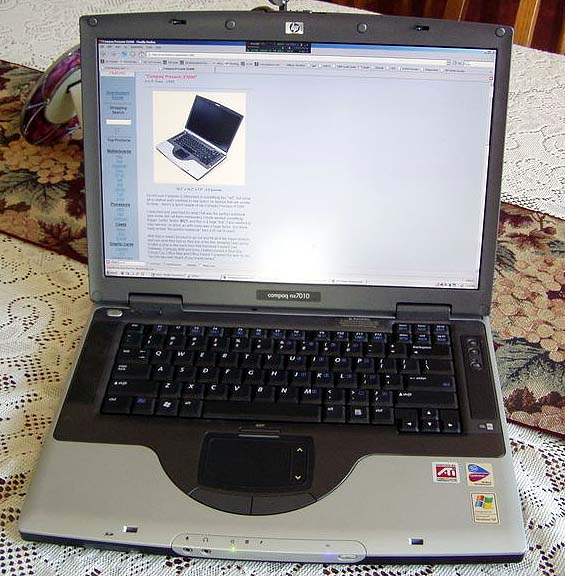 Close up on the high resolution screen.

Out of all laptops I have looked at, this was my favorite, the features that made it number one are:

I took a look at the laptops with desktop processors and they didn’t have the battery life, and the power. Of all the Dell computers I have used I have never been satisfied, and I haven’t heard much good about Gateway. My friend has an emachines laptop and I won’t touch it with a 10 foot stick. I also looked at building a laptop – the final cost after I have very similar components ends up being about the same or more.

Upgrading this laptop is a snap, simple as unscrewing a few screws. There is a stick of RAM located under the keyboard; unscrew two screws on the bottom and pull down the tabs between the F keys and it’s out. The other stick is on the bottom side, a simple one screw to remove the cover. The hard drive takes two screws and it’s out, one screw for the optical drive and one screw to get access to the mini-pci slot where you will find the wireless NIC.

I have never had any regrets buying this laptop, even though I spent another $500 more than what I sold my other one for. I like everything about it – very thin and light, runs extremely cool, and the fan only runs when it boots and during video games.

Overall, this laptop, with my Logitech wireless optical mouse for notebooks, is a dream.

What To Do With An Old Billion Dollar Fab . . .

The Inquirer reports that AMD fabs can and will make ATI GPUs. Well, they needed to do something with Fab 30! One little-known fact about Fab 30 was that when the various German governments agreed to subsidize its construction, AMD

Apple and Intel You may have noticed that both companies haven’t been doing too well in the stock market lately. Intel’s dropped by about a third; Apple by more than half. The mere fact that they dropped probably shouldn’t concern