An aluminum extrusion with an 80mm fan – an OK but not great cooler. — Joe

SUMMARY: Does an OK job for if you’re not pushing things too far. 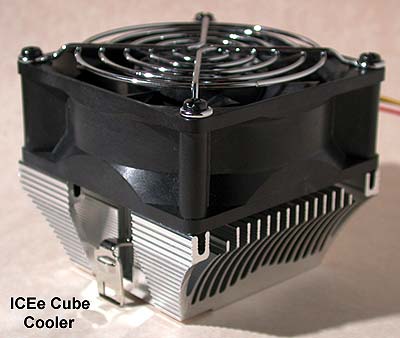 The pyramid-like design does a couple of things – helps to clear capacitors around the socket while allowing for an 80mm fan, and also pushes a fair amount of cooling air onto the motherboard.

Peering down into the ICEe Cooler 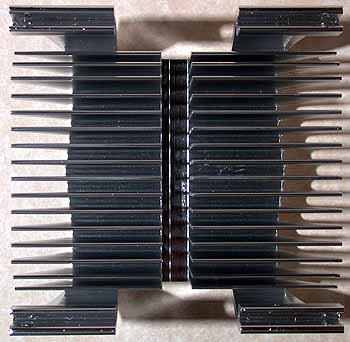 Looking at the fins

shows the serrated edges to them – an increase in surface area and perhaps to create some turbulence, both attempts at increasing cooling efficiency. 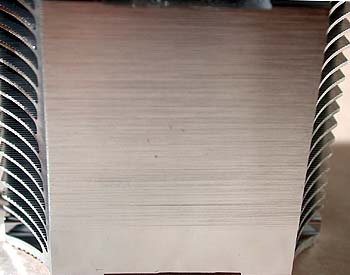 shows some light polishing marks and might benefit some from lapping.

The clip is not indexed and requires a screwdriver to mount on the socket. I would strongly recommend that you take the fan off, mount it and then screw the fan back on – you’ll have more clearance this way than with the fan on, reducing the possibility of a disastrous slip onto the motherboard with the screwdriver’s tip. Also make very sure that the tip fits into the clip’s screwdriver tab – a loose fit can be a costly slip.

I prepared the ICEe Cooler by boring a hole completely through the base so I could epoxy a thermocouple above the CPU. The thermocouple is attached to an Omega HH23 Digital Thermometer. Ambient temps were measured with a thermocouple placed about 1 inch from the fan’s intake. I used Prime 95 to stress the CPU on an Iwill KK266+, Iwill BD133u (MBM temps are on-die) and Abit KT7. Arctic Silver grease was used in all tests. CPU Case Temp is the temp at that point where the CPU contacts the heatsink, CPU Back Temps are measured by a thermocouple on the center back of the CPU.

The ICEe Cooler was also tested on the CPU Die Simulator which gives results that are unaffected by motherboard influences.

The CPU Die Simulator places the ICEe Cube Cooler just outside of the upper range for “performance” heatsinks (C/W of 0.32 or better). Of particular interest are the Celeron 1.2 GHz @ 1.6 GHz results; there is one more thermal interface between the die and heatsink (die to thermal cap), and the difference between the heatsink and on-die temps is about 5C higher than we’ve seen for flipchips.

More typical of what to expect for flipchips are the T-Bird and Duron results.

The ICEe Cube Cooler just about misses the “acceptable” list – heatsinks with C/Ws of 0.32 or less – for AMD CPUs, although it does a nice job on heat-capped Celerons. This heatsink could be a decent price/performance buy.

Thanks again to ICEe Computers for sending the ICEe Cube Cooler our way.

AquaStealth - How To Mix Water and Silicon