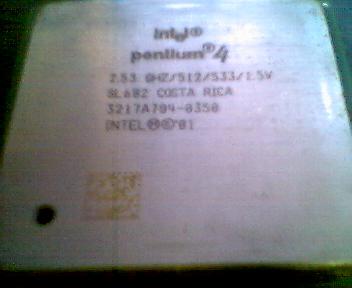 The Pentium 4 chip is covered with a solid heat spreader that protects the fragile core from being crushed by today’s heavy CPU coolers. As you see, the stepping model # and other information is printed on it.

I’ve been reading up on this heat spreader and found one person selling a P4 3.06 with a void warranty because he lapped it. I asked him why in a PM at another forum and he replied that most P4 heat spreaders are not even close to being flat and lapping them will give you a decrease in CPU Temperatures.

SO I decided to try it.

To lap any processor, you need the following:

NOTE: This article is for information purposes only – neither the author or Overclockers.com will be responsible for any direct or consequential damages arising from misuse of this material. After doing some research online (thanks to Notebook Forums -notebookforums.com- for

We’re now just about at the point where realistic 166MHz + overclocking is becoming feasible to those less than extreme hardcore. Yes, I’m well aware people have been doing this for months already, but a lot of it hasn’t yielded

SUMMARY: In a special to Overclockers.com, Jing Fong (our man in Taiwan) reports on the ASUS – ABIT Merger. In a stunning, surprise announcement, ABIT and ASUS revealed that they have merged the two companies into a new company called