Intel officially launches the new “Lynnfield” CPU series and the results look like a love-fest.

Take a look at this chart: 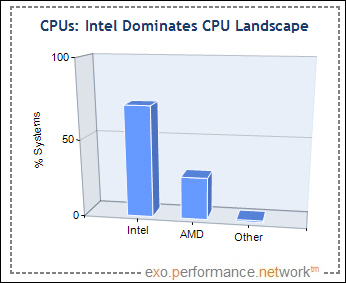 One of the indisputable advatages of market dominance is power – power in marketing, technology and resources. Any company in this position also gets a bit paranoid about maintaining its dominance, mainly by being at least one or two steps ahead of the number two competitor. Intel has taken this to heart with its i5/i7 launch that, frankly, sets AMD back on its heels.

The reviews are now surfacing and the verdict appears uniformly positive, as indicated below:

“We were deeply impressed by the performance and low power requirement of Lynnfield and feel confident that the Core i7-860 – the now-announced slightly slower (2.80-3.46GHz) sibling of the i7-870 we tested – will be the processor of choice through to the end of 2009.”


“I’ll start this conclusion with what AMD must do in response to Lynnfield. The Core i5 750 is a great processor at $196, in fact, it’s the best quad-core CPU you can buy at that price today. In nearly every case it’s faster than AMD’s Phenom II X4 965 BE, despite the AMD processor costing almost another $50. Granted you can probably save some money on an integrated 785G motherboard, but if you’re comparing ~$120 motherboards the AMD CPU is simply overpriced.”


“The launch of Core i5/i7 and the P55 represent a major step forward for Intel’s desktop line, and they bring Nehalem’s performance dominance of AMD’s offerings onto the mainstream desktop.”


“Core i7-800 and Core i5-700 processors seem to be an excellent replacement for the LGA775 Core 2 Quad CPUs offering much higher performance at the same price. The launch of LGA1156 platform brings a real revolution to the mainstream segment. This platform immediately turns Core 2 and Phenom II CPUs into outdated solutions that can only be of interest in the sub-$200 category.”

Overclocking the Lynnfield series looks very good as well, with the i5-750 turning in a very respectable 4 GHz compared to the stock 2.66 GHz. However, this was achieved by bumping the voltage a touch from 1.35 to 1.4 volts, all with top-notch air cooling. Overall with Intel’s aggressive pricing, the Lynnfield series will cement Intel’s CPU dominance in the desktop market and looks like a sure price-performance winner for overclockers.

SUMMARY: First look at AMD’s Palomino indicates marginal performance improvements over the T-Bird, but will the extra cost justify a switch? I am very interested in the Palomino, mainly due to the inclusion of an on-die thermal diode in its

The Bloomfields reviews are out, and if most of you look upon them with an unbiased, unhyped eye, you now have a new reason to buy a Penryn.