SUMMARY: The back of your motherboard may be a lot warmer than you think!

As power increases due to higher frequency CPUs, getting rid of power’s byproduct, heat, is becoming more of an issue (See HERE, for example). We are seeing heatsinks with Delta 38 fans to meet cooling requirements, and as CPUs are introduced in the 1500 MHz ranges, heat production closing in on 100 watts is not far off.

Almost lost in the noise about controlling CPU heat is the issue of heat production on motherboards. Think about it: The power needed not only for the CPU, but for all other peripherals, is concentrated on a small patch on your motherboard. In addition, the Northbridge chip is pumping out some heat also, as attested by the use of active cooling by some motherboard manufacturers. 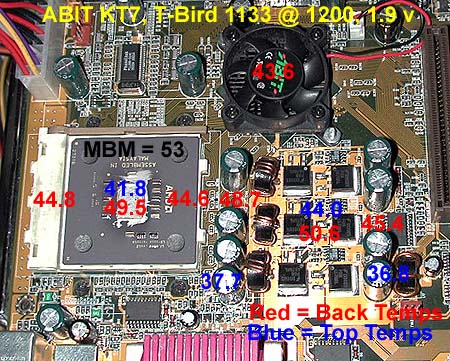 The RED temps are measured on the motherboard’s back, the BLUE on the front. Note also the reading from MBM (Motherboard Monitor): 53C. Also not that the CPU, as measured with a thermocouple contacting the top of the CPU through an air cooled heatsink, measures 41.8C. In socket thermistors, as motherboard temps increase, will increasingly read more of the motherboard than the CPU.

The so-what of all this is that paying attention to getting some air circulation BEHIND the motherboard is not a bad idea. Radio Shack sells the NIDEC Gamma 28, a squirrel cage fan, which would be perfect for this application.

Some folks wrote in that these power chips can go to 150C before they burn out; that’s not the issue. The issue is the motherboard, by design, is a heatsink for them. I think as we push CPUs by overvolting and higher multipliers, the heat generated on the secondary heatpaths might start to migrate more into the CPU heatpath than expected.

First recognition by manufacturers of secondary heat source cooling was using active fans on the Northbridge, something we overclockers have been doing for years. I think it’s EPOX that’s now including heatsinks on the power chips. Active heatsinks are the next step, and in fact may be a necessity rather than a marketing gimmick.

Before my mods, the CPU would run in the mid 40 C range, sometimes reaching as high as 49 C. 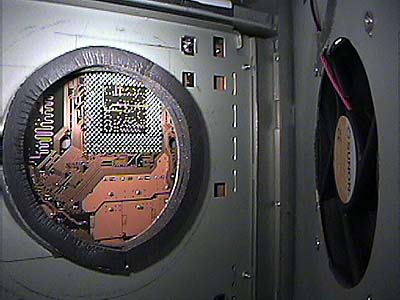 I cut a hole (under the CPU) in the mobo tray and side of the case. Then mounted a Sunon fan on the side of the case to blow the cooler room air onto the back of the CPU. 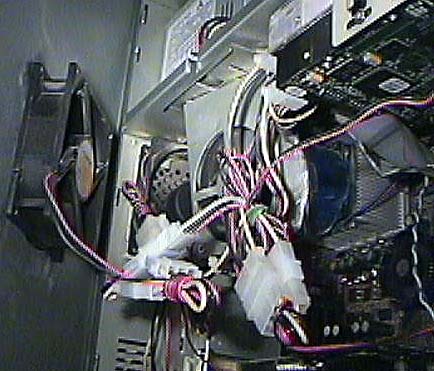 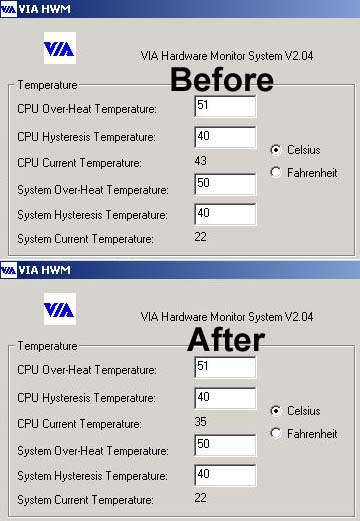 As I sit here typing this, the CPU is running @ 36 degrees C, and the system @ 21. The CPU has gone as high as 39 and I’ve seen it as low as 31. I’ve still got to add a cone on the fan mounted on the left side of the case (to focus cool air to the existing fan). The screen shots tell the story – room temp was about 70 degrees F at the time – not real scientific, but if it works, it works!

Got our second MSI K7T Pro2A board. It did exactly what the first K7TPro2A board did, came up with just about any multiplier other than the one you wanted. Went through the BIOS with a fine-toothed comb, updated with the

Since the release of Intel’s P55 platform, a seemingly endless number of motherboards have been popping up, ranging from under $100 for basic entry-level boards to close to $300 for feature-packed overclocking powerhouses.   MSI’s top end 1156 motherboard, right around the middle of the P55 price range, is the P55-GD80.  With all of the features and overclocking options, I was very excited when MSI sent me this board for testing.