As I mentioned in the introduction, the MSI GTX 1070 Aero ITX 8G OC is a full featured GTX 1070 in that it has all the shaders, ROPS, and TMU’s of the larger cards. The only difference here, outside of size, is the clockspeeds are a bit lower, and of course it has a single fan on it and is a lot smaller to fit easily into small cases.

The card comes in at a base clock of 1531 MHz. This yields a base boost clock of 1721 MHz, while actual boost hits 1886 MHz consistently in our testing. Memory comes in at 2002 MHz (8008 MHz GDDR5). This is a bit slower than the rest of the 1070’s we reviewed, but I have to say I expected all the clocks to lower a bit considering its size. That said, as you will see later, there isn’t much of a difference in performance either.

More information can be found below and from the MSI website.

By far the biggest draw to the Aero ITX card is its small size. This allows it to fit in small form factor systems and HTPC’s and yields a powerful, high-end, GPU in a very small footprint.

The Aero ITX cards have not forgotten about cooling as they used their award winning MSI TORX fan on the card. The patented fan blade design provides superior cooling performance while remaining silent. Speaking of silent, the Aero ITX also uses MSI’s ZeroFrozr technology to eliminate fan noise in low-load situations. It does so by stopping the the fan when they are not needed (until 60 °C).

The heatsink used is comprised of three 8 mm super pipes and a slew of aluminum fins. Like the TwinFrozr cooler on the full sized cards, this heatsink also uses Airflow control to deflect the air to where its most needed.

Last but not least, the Aero ITX sports MSI’s Military Class 4 components using the MIL-STD-810G certified components. These are said to help with the torturous circumstances of extreme gaming and overclocking for extended usage. See more at the website for the Aero ITX!

Below is our gratuitous screenshot using the latest version of GPU-Z. Still has all the same parts of its full sized counterparts, just with a bit less clocks!

Below are some shots of the retail packaging and how it rests inside. High level information including the card inside, the model (OC) and it being VR Ready grace the front while other features and specifications are on the back. When opening the box, you will see the card sits snug in form fitting foam inside its anti-static bag. Accessories include driver disk and a quick start/instruction guide.

Ahh… here we go with its diminutive little self, the MSI GTX 1070 Aero ITX 8G OC. You will really get a feel for its size a few scrolls down, but, here she is in all her Small Form Factor (SFF) glory! As you can see the heatsink shroud is mostly black with their large TorX fan cooling down the GPU. The card does not come with a backplate, nor can you order one I don’t believe. Not a big deal in the least with its intended use, crammed inside a SFF case!

Outputs on the card are still full compliment. You get two 2x HDMI (v2.0), 2x DisplayPort (v1.4), and DL-DVI-D. Having dual HDMI (among other things) gives it the “VR Ready” specification. In order to power this little beast, one 8-Pin PCIe power will be required. Between it and the slot allows a total of 225 W to get to the GPU and be in spec.

Removing the heatsink was quite easy on this card coming off with just six screws total. Not that they come off frequently. Some of these full sized cards with backplates and plates for the memory/VRM I’ve seen use over a dozen screws before!

On the base of the heatsink we see a total of three heatpipes. The two on the outside flattened pretty good. These attached to a baseplate which in turn makes contact with the GPU itself. We can also see good contact on the VRM thermal pads, and partial contact on the vRAM. Not really a huge issue of course as memory really doesn’t get that hot. These overclocked just fine as well. Here we see a 5+1 VRM design, which is the same as the Founders Edition, except in use here are higher quality power bits.

I promised I’d show you a picture of just how small the card is. Ironically, it is bigger than the other card used. However, that card is a budget AMD R7 250. There isn’t nearly as much going on there as there is on the GTX 1070. It is taller than the bracket though, so keep that in mind when choosing a case and this card.

We all know about MSI Afterburner by now I am sure. You are able to control everything you need to from this application. Fans and fan curves, voltage, core and memory clockspeeds, monitoring the GPU and system… all here. 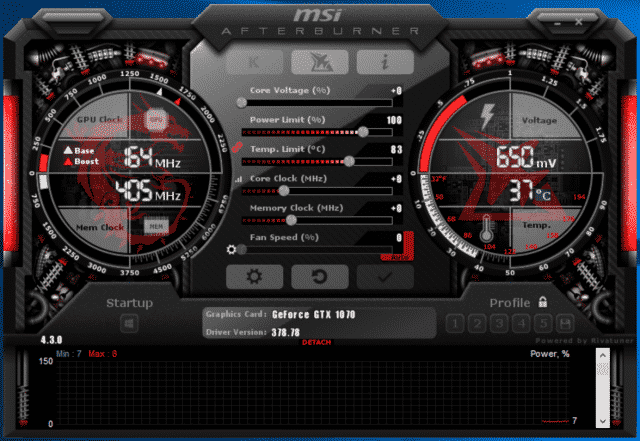 Note all testing below uses 1920×1080 screen resolution (settings also carry over to 2560 x 1440 and Surround/Eyefinity testing, if applicable).

So how did the little card that could do in this testing? Pretty darn good. Although the clockspeeds are a bit lower, its still a full 1070 with all of the 1070 performance. You can see in these tests its only a couple of percent behind in our synthetic testing. Nothing a little overclock won’t take care of and still plenty for 1080p and 2560×1440 gaming… even in a SFF or HTPC!

The games side of things really shows the same as with the synthetic testing. The slightly higher clocked full sized cards are running slightly faster throughout the testing. All titles are of course still plenty playable at 1080p resolutions.

Moving up a bit to 2560×1440, we see in most titles there are plenty playable frame rates here too at our Ultra/Highest settings we choose to run these games at. Certainly some concessions will need to be made with ROTR and maybe Crysis 3. Otherwise you are close to or above 60 FPS in our games list.

Here I was able to raise the power limit to 112% raise the voltage a bit (what little that actually means on Pascal) and get the core up to 2012 MHz for a working ‘average’ on the core. The power limit at 12% above stock is really putting a glass ceiling on the card and dropping bins when it poked through the 112% limit. On the memory side, I was able to push the Micron based ICs to 2252 MHz. There is probably a bit more left in the tank, but I chose to lean on the core since it matters more performance/benchmarking wise.

Temperatures for this smaller cooler really stayed under control and quiet in my testing environment. Granted, for this type of card, my environment isn’t exactly similar being open air versus the typical confines of a SFF case. As always, YMMV. But the fan spun up and kept things around 70-72 °C while barely being audible.

Power consumption for the system peaked at 289 W in Unigine Valley overclocked while at stock speeds, hit 277 W. Sipping on the power, Pascal!

MSI has taken an incredibly viable 1080p/2560×1440 card and shrank it down to SFF size while still having nearly the same performance. The heatsink and TorQ fan used on the card to keep it cool is pretty silent until you break 70% fan speed (I only did this when pushing the limits). The black heatsink shroud/fan with white brand and model lettering lend its look to fit in with most aesthetics. Can you believe though it does NOT have an RGB LEDs???!! I’m not complaining really, just surprised in this day and age. But really, considering its intended use in SFF builds that generally do not have plexi/glass sides, it isn’t a problem.

I don’t really have anything bad to mention. The overclocker in me wants more headroom (in all NVIDIA cards, let’s be honest here), but I do understand why limiting it compared to full sized cards is a good thing in this situation. It still rocks the house like a 1070 does without it.

Pricing on this card comes in at $396.89 at newegg.com. As far as ‘mini’ GTX 1070’s go, the cheapest is $380, so the pricing really isn’t much different honestly. The full size cards are from that point well into the $450+ range so its really is a good deal. I recall a generation or so ago there was a pretty stiff premium for the little ITX cards. Not so far here!

If you are looking for an ITX card for that SFF build, I wouldn’t look much further than the MSI GTX 1070 Aero ITX 8G OC. It has the small size needed, quiet fan, and performance you’d expect out of a GTX 1070 of any size. This is overclockers.com approved!

With CES 2021 starting today and running through the week, we can expect a barrage of newly released and leaked products. The first on that list is a leaked image from Videocardz.com showing MSI’s next flagship motherboard, the MSI MEG Z590 GODLIKE. Just like its Z490 predecessor, the Z590 GODLIKE will be an E-ATX board but will feature only a pair of PCIe slots as opposed to the trio from the previous generation. Slated as a flagship overclocking beast, the Z590 Goldlike is reportedly equipped with 20 VRM phases. Also featured in the image are the MAG Z590 Tomahawk WIFI and MPG Z590 Gaming Carbon WIFI. Read More

We review a lot of powerful video cards here. Between three of our editors, we have three GTX 780 being put through their paces. However, you can’t always fit that kind of power in the system you want to build. What if you’re into small form factor (SFF) computer building? There is an entire community of SFF builders in our own forums. Gamers that enjoy going to LAN parties also run into issues not wanting to lug around fifty plus pound rigs around. ASUS thinks they have their answer for you – the ASUS GTX 670 DirectCU Mini. Read More

Gigabyte H55N-USB3 mini-ITX: Big Overclocks From A Small Board

The Gigabyte H55N-USB3 is one small board that is capable of some really big overclocks. I have always thought of mini-ITX motherboards as utilitarian in that people only used them if they had a specific reason to. Like me, most people probably never thought of small form factor motherboards as something that might be good for gaming, overclocking or benchmarking with, but Gigabyte’s mini-ITX motherboards are quite capable in all those respects, so let’s see what the H55N-USB3 can do. Read More