First, I’d like to say something in favour of Asus, Rambus and Intel, and something against DDR, AMD and ATI. I don’t know why, and I actually don’t care, since my systems without them perform pretty well, and only few people say Asus makes crap PC parts

It was in May of 2002 when a friend of mine came up with a system that he didn’t need anymore, and I could buy it from him quite cheaply. It consisted of:

The 3DMark score of this system (without any mods) was 4.233, and since it ran Return to Castle Wolfenstein pretty fast (@ 800×600), I didn’t complain. In August I visited a LAN party and saw other guys with huge machines…DVD players, CD burners, watercooling etc… AND most impressive, running RTCW @ 1280 x 1024 without any lags.

What came up in me then I didn’t know, but I had made some nice money till then with my internet shop (www.personal-computer.tk) and I decided to make my machine a monster machine. The first thing I did was paint the case black.

From then (and now) on my computers are called DarkLord. I bought myself a DVD player (Pioneer slotloader, €59), a 40x CD burner (LG, € 69) and painted their fronts black as well. With that combination, I started burning my entire movie collection on CD and ripped some DVDs, like Pearl Harbour, at nice quality.

By that time, I had visited Overclockers.com for some time…just to read stories of other people overclocking, and I started to think “maybe mine can run a little faster too.” Just by making a BIOS changes, I pushed my 2,0 to 2,3 (115 FSB) and it ran stable @ 1,5 volt (note: the CPU temperature was doing 55 C by that time). My memory was doing 460 Mhz and ran pretty hot. I installed the Asus overclocking program for my videocard and without any other cooling, my 3DMark score jumped up to 5627.

As you see, I got some things quite cheap – that’s because I know some nice guys that work in computer stores and they got me those parts cheap. In that way, I also got 256 MHz of extra RAM for € 110 (total 4×128 = 512), which increased my score further to 6114. Then I tried to push up my CPU speed even higher, but at 2,4 Ghz, it locked up after a few minutes, and with higher speeds it didn’t even boot.

That was quite impressive, maybe not for others, but for me it was. I could run RTCW, Ghost Recon etc. All at @ 1280×1024 without lags and with full special effects and detail.

After I installed Asus Smartdoctor2 and increased the speed of my videocard to 280/600, my score got up as far as 13.390. My video memory was quite hot, so I demolished an old Pentium 1 cooler to get 8 heatsinks out of it, and glued them on my vidmem with a combination of Bisontix and Arctic Silver (I shaped the under-edges carefully, to prevent the chips from getting damaged. The upper side is still quite raw sawed.) 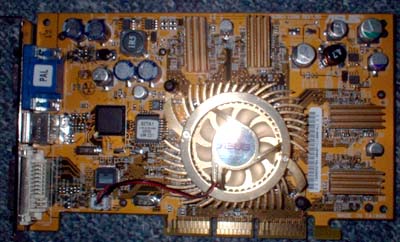 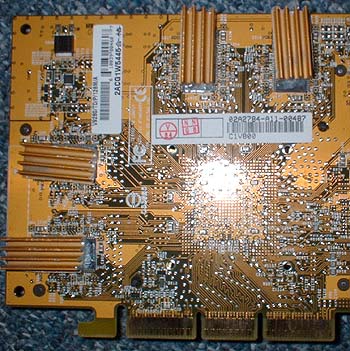 My videocard. The chipset coolers are self-made from an old Socket 7 heatsink. The small heatsinks are firmly glued to the chips with a mixture of Arctic Silver and BisonTix: 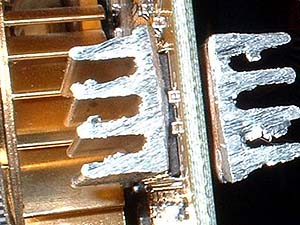 The sinks are not placed very carefully, during the drying some slipped off a little weird and are now stuck a little out-of-place (Who cares? They’re working!)

My Zalman cooler was performing perfectly and kept my CPU temperature under 50, even after 2 hours of 3DMark. I knew the best performing temperature for a CPU is below 34 degrees, but that would be impossible without more advanced cooling (water / peltiers) and the thought of spending € 200 on a watercooling set made me sick.

After a week or so, I sold my old motherboard and memory for € 300, which was exactly enough to pay for my new one, an Asus P4T533-r and 256 MB of PC4200 Rambus (I chose the expensive one, with onboard 5.1 sound, RAID and s/pdif). I also bought a Coolermaster 80 mm fan, because that one could be added to the Zalman fan bracket.

After I installed the new board, memory and coolers, my case looked like this: 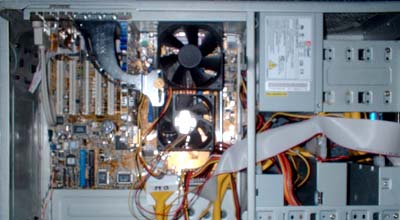 As you can see, I use round cables because they bend easier and obstruct airflow less than ribbon cables. To the upper-right is my harddisk, and right under are my CD burner, DVD player and CD player. The only ribboncable is for my floppy drive, on top of the case. 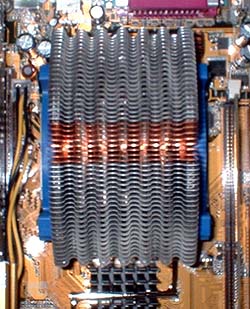 Zalman flowerbed coolers not only perform very well, they look great too!

After the installation of the motherboard, I was able to increase the FSB to 140, 2,8 Ghz, 1,6 volt. (1,5 volts locked up after 5 minutes). It ran stable and performed very well in 3DMark: 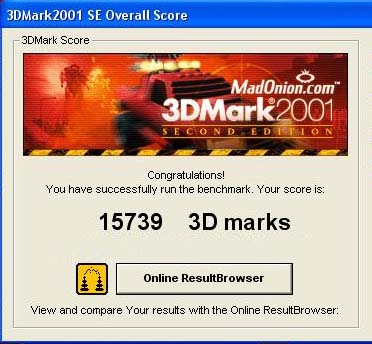 After performing the test, I couldn’t believe the CPU temp. The entire 3DMark run, it didn’t go over 29 C!! I don’t know why this happened, but it seemed only adding 1 extra fan (and thereby massive airflow through the CPU heatsink) could cut the temperature almost 20 degrees! 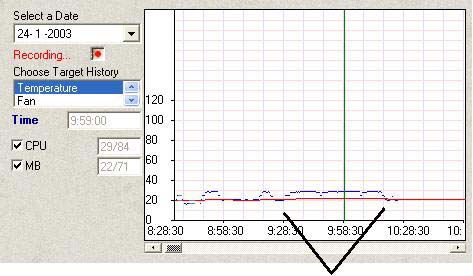 This is a screen shot of the temperature history during 3DMark. I ran it for about 45 minutes, and as you can see, the temp didn’t go over 29 C.

When my system is idle, the temp stays very nice – under 22 C: 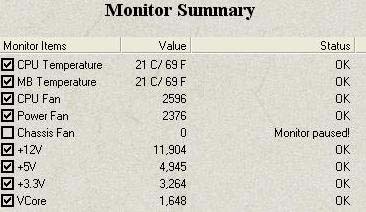 The hardware, after all my expenses, is not the only factor in reaching high scores. I have a lot of programs running to increase performance, such as:

The system is running since the 24 of January, 2003 at these speeds:

My system runs stable now, and it’s almost unbeatable. No AMD – DDR system can match this, unless extreme overclocking is done. The changes I made, were mostly done with the motherboard, which I really love! The P4T533 is very complete, easy to use (multi-language BIOS) and easy to configure. I can change the FSB in 1 Mhz stepping, while keeping my AGP and PCI buses at normal (66/33 MHz) speeds.

I’ve seen a lot of overclocked machines in which the PCI slots were the bottleneck, because NICs can hardly be overclocked, as well as soundcards. I’m not able to get higher. I tried 3,0 @ 150 @ 1,7, but then the motherboard says: CPU core out of specs and it doesn’t boot. With lower core, it doesn’t even try! My CPU is the bottleneck now, and since I don’t have € 799 available for a 3,06 HT, I’ll just wait.

I also use to play GTA2 sometimes, and when the frame rate limiter is off @ 1024×786, I cant play because it’s going so darn fast! The inside of my PC fast and smooth (I try to keep it neat, therefor the round cables are also handy, because they don’t take up much space). Keeping your case neat doesn’t only look good – you are also able to reach important parts quickly without having to go through a bunch of cables.

I use my PC for almost everything, but as I already said, gaming mainly. On LAN parties, I can use the machine as dedicated server for UT, RTCW, while playing ra2 myself. I am saving money for more memory (an additional 256 MB) because it sometimes “runs out”. I’m also looking forward to buying a 3,06 HT later this year, because that will speed up my memory and A/V work significantly. As always, I’ll try to overclock that one also, so you’re not off me yet…. 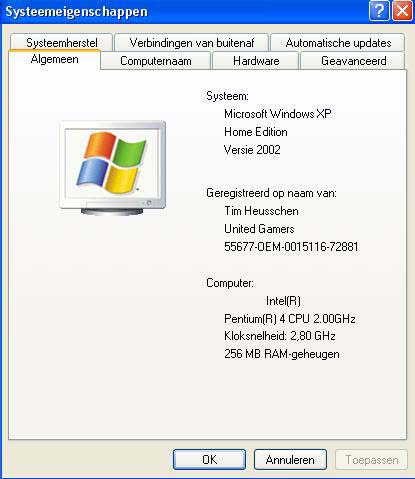 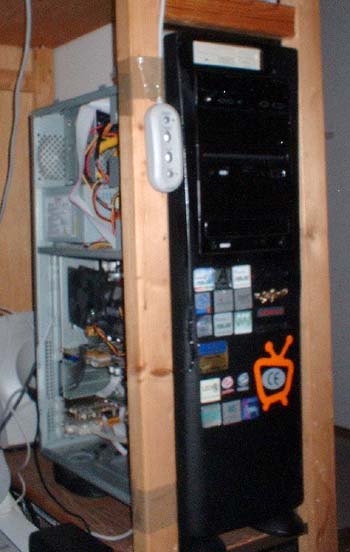 Hi and welcome back again!

After my last adventure with DarkLord, not everything was going smoothly, as described below. I’m sorry for not having pictures (of the pinwrapping), because I don’t have my own digicam yet, and the one for the last article was borrowed from a friend.

Yes, that’s it. I thought after the 3DMark of 15.739, the clocking etc., DarkLord was stable, but once it went wrong. I got a 250 Meg .ace file and extracted it. Since it took quite long, I went away from my PC, and when I returned the infamous blue screen was on. DARN! How could this happen? I rebooted and started the process of unpacking again… And again… And again. Every time, after about 6 minutes, DarkLord crashed and BSOD’d.

Hmm… Seemed no good to me. And also very strange, because it could run 3DMark endlessly, so why crash during some lousy unpacking? I know – unpacking is a CPU’s job… so maybe mine is more bottlenecked than I thought. It wasn’t the temperature (still under 30), so maybe the core was the problem. The CPU voltage was 1,6 and I saw a lot of OCs during which it was much higher. My motherboard however, would not boot if the voltage was set above it.

Problem. Although it was not much of a problem really, the feeling that heavy activity could make it crash was not good, so I decided to raise the voltage manually by doing some modding to the CPU.

Warning: Don’t try this unless you know what you’re doing. It will very likely void the warranty of your CPU and motherboard. Also, if not done carefully, your CPU might get mortally damaged!!

The modding of a Pentium 4, also mentioned as “Pinwrapping” or “Vidpinning”, is done by connecting some of the CPU’s connector pins with a very tiny copper wire. What you need is simple:

What must be done is easy. For the core voltages, connect the relevant pins: 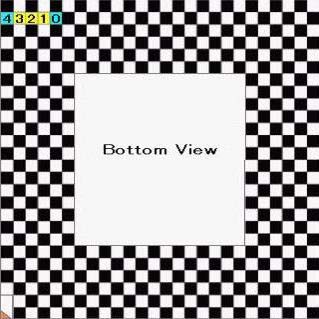 The Pentium 4 basically has 1.5 volts, which can usually be increased a little bit by the motherboard. By connecting the pins numbered 3 and 4, you get 1.7 volts as starting core; by connecting 4, 3, 2, you get 1.8 volts.

I first did the wrapping for 1.7 but my motherboard still refused to boot, saying “CPU core out of specs”, so I went for 1.8 volts. Very weird – this time my motherboard accepted it and it booted cleanly. It seems that my BIOS has something against 1.7 volts, because that’s the only voltage not working.

Now the job was done. It clearly got through the unwrapping of the .ace file and it never crashed again. Very weird though – the increase in core voltage did something significant to my 3DMark score: 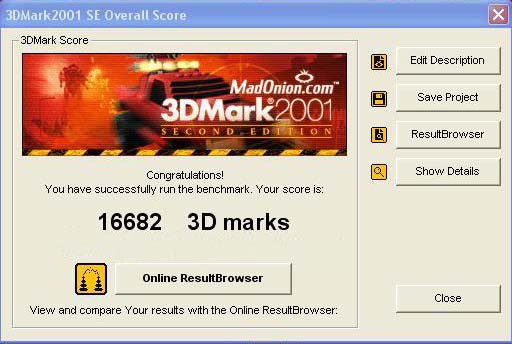 Very weird. I never saw ANY overclock in which increasing CPU voltage had anything to do with performance – it usually only makes it more stable. Anyway, since it makes it faster, I’m not complaining. (My MB now allows core voltages of 2,0 volts… maybe that can get me over 17.000 🙂

Well, now it’s running stable. The only change since the last summary is that the core voltage increased from 1.6 to 1.8, which also increases heat production. Before, the maximum temperature of the CPU @ full load @ 1.6 volts was 29 degrees; now @ 1.8, it increased to 34 degrees, which still sounds very nice to me.

On my last post, from which this is the update, I received a lot of reactions, mostly compliments, and also a lot of questions. How do I increase the FSB? Which coolers are good? What PSU do I need? What is Rambus? (Yes, I explained that!)

I tried to answer them all, but since there were over 20 a day since the post, I might have missed some. Sorry for that!

A Beginner’s Guide To Securing a Wireless Network