I received a new stick of Mushkin’s Rev 3 to test out. I found that ctSPD read exactly the same as below, so there is no change there. I once again tested using Ultra-X Inc. RST Pro PCI with the following results:

Compared to the first test, Mushkin’s Rev 3 performed about the same as Crucial’s PC133 CAS2. Differences of a couple of MHz are not significant. Users report mixed results, but Mushkin’s guarantee is pretty clear: If you can’t run 150 FSB at CAS 2, they will replace it, as they did here, with return shipping paid by Mushkin.

Based on this test and others so far, I have yet to see much of a difference among so-called PC 150 offerings from Crucial’s PC133 CAS2.

UPDATE May 7: Response from Mushkin:

“First off, thanks for the review! 🙂 Secondly one or two of the early
batches of Rev3 modules had some problems as far as SPD programming goes.
Any customer who received one of these gets a replacement, even if they had purchased through PC Nut. The Rev3 should be programmed for CAS2-2-2 at PC133. We also guarantee the memory to overclock to 150MHz at CAS 2-2-2 provided the rest of the system can tolerate being overclocked. Inability to perform to this spec would also be cause for a replacement.

The Infineon chips which we use for the Rev3 are spec’d at 7.5ns, PC133, CAS3 by Infineon. This has a tendency to confuse some of our customers so I thought that it was worth mentioning. By hand-picking the chips and
combining them with our highest quality PCB, we are able to run the chips
beyond the manufacturer’s recommendation.

I would be more than happy to send you a replacement with the proper SPD
program. Please let me know if you have any questions or comments.
Thanks,
Lewis”

I had a very nice chat with Lewis, who explained they test the chips they get from Infineon and manufacture their own modules in California. Nice to see an up-front and prompt response (Lewis beat me to the phone). Mushkin is RMAing the RAM I have and I’ll retest when I get it. Thanks Mushkin!

UPDATE: Apparently the RAM I tested may be different from what some of you have purchased. I called Mushkin to clarify, but they are closed for the weekend. I received screen shots from Robert and Mangelo of their Mushkin Rev 3s, which I used to compare to what I tested: 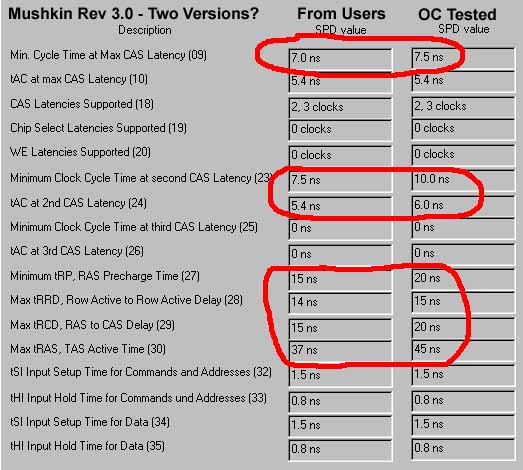 Looks like what I have is not what some of you purchased. I don’t know where the confusion is, but use some caution in purchasing. Soon as I can clear up this up, I’ll post it.

PC NUT was nice enough to send me a sample of Mushkin’s High Density, High Performance Rev 3 SDRAM to test out. I decided to run a test series against Crucial’s PC133 CAS 2 to see how they compare. Shown below are the chips on each module:

Note that the Mushkin is rated at 7.5ns while the Crucial at 7ns.

The first thing I did was to get some basic data using ctSPD’s Memory Readout Utility* as shown in the composite screen shots below:

The first thing that pops out is Mushkin’s is rated CAS2 at PC100 and CAS3 at PC133, while Crucial rates at CAS2 for PC133. Some of Mushkin’s timings are not as aggressive as Crucial’s. The “Tale of the Tape” would seem to tilt in Crucial’s favor. Let’s run some tests and see how they match up.

I used a test suite from Ultra-X Inc. called RST Pro PCI. This is a PCI card that performs a number of memory tests to burn in and identify malfunctioning SDRAM modules. When you install the card, the PC boots to RST Pro, so there is no OS interfering with RAM testing. The tests it performs can be used to identify the highest stable FSBs for a particular motherboard/SDRAM combination.

Testing includes over 30 testing algorithms using unique methods developed by Ultra-X to validate RAM with maximum amount of data traffic. Some rely on stressing the bus with data throughput to achieve a full load to create a failure that would occur under standard or stressful use, like running Prime 95. When errors are reported, it’s even possible to identify which chip is failing. Each test series is run 4 times, taking about one hour to complete.

I used an Iwill KK266 with a T-Bird 1133, 1.85 volts to run the RAM through its paces. Each RAM module was run until it failed specific FSB and memory settings. I ran each module to find its best, stable FSB using Iwill’s most aggressive memory settings and then the highest possible FSB with the most conservative settings. I kept the multiplier low so that there would be no problem with CPU stability.

First thing that hits you square in the eye is Mushkin’s inability to get much beyond the low 140s FSB. The Iwill would not boot at 145 or above. In contrast, the Crucial was OK up to the low 150s – a marked difference.

The next test series was to find the highest FSB at the most conservative memory settings. In this series, the Mushkin barely edged out the Crucial, but not significantly so – really a draw. Neither could make it into the mid 160s stable.

Looks to me like Crucial’s PC133 CAS2 is tough to beat. I haven’t tested every possible RAM stick out there, but so far I have yet to see another brand perform significantly better. I’ve asked Kingmax for a sample of their PC150, so hopefully we can take a look at that as well.

As always, this is a sample of one stick; you have to assume its representative of others.

Thanks again to PC NUT for letting me test this RAM.

*A few folks are having problems running this utility, so it may not function on your system.

Recently, GeIL announced the Polaris RGB DDR5 high-performance gaming memory. DDR5 memory starts at 4800 MHz CL40-40-40 at 1.1v and GeIL has plans for multiple kits up to 7200 MHz CL36-44-44 with and without RGB. Availability is expected for the fourth quarter of 2021 but pricing has not been disclosed yet. Here is GeIL’s press release.

ED Note: I received this email and thought the sources listed would be of interest – Joe. How do those ctSPD memory timing settings and what FSB a memory can boot up at, relate in terms of memory performance? Does