Hey gang, you may remember me from my caffeine-induced rants, raves, and ramblings last January – I’m back home from school for the Summer and ready for a couple more months of overclocking madness. I’m currently running two x86 systems at home – you don’t want to overclock a Sun UltraSPARC, trust me – and one of them is upstairs in my bedroom.

It’s serving an image for my site‘s webcam and it’s currently running Windows 2000 Professional. Linux still hasn’t ironed out the USB issues I need fixed for my 3Com PC Digital Camera, so it’s a going to be a Wintel world for a while. If you’re experienced with USB configurations under Linux, please let me know!

Up until last week, I had an AOpen AX63 Pro motherboard in there, 64MB Micron PC100, and a P III 450 SL35D @ 600MHz, cooling courtesy of an Alpha P3125. Uptimes for that machine averaged about four weeks. Last Saturday at a computer show I picked up a Celeron 2 “Celemine” 566 chip. It’s Malaysia, SL46T, OEM. I came home and broke out my trusty BX6 Rev. 2 board and an Abit Slotket III. Within a few minutes I’m set up as follows:

I’m puzzled as to comments like these from Dean, to be honest. I thought the chip performed very well, based on both overclockability and flat-out performance. These are SiSoft benchmarks (the P III machine is my other x86 machine, a P III 500 @ 700 – 702, actually, [5.0*140.5] with the Intel retail heatsink, Soyo 6BA+ IV motherboard, and 256MB Micron PC133).

Under Sandra, you see the CII @ 700 (83*8.5) holds tight with the PIII 700, and really takes off at 953. I suppose Sandra isn’t very cache-intensive. I just can’t understand statements like “the darn thing just can’t compute its way out of a wet paper sack.” The Celeron II performs very well on my machine. Just go in remembering that it has only half the L2 of a regular CuMine chip – there’s no doubt it makes a difference in games or applications like SETI. Let’s have a look at some pictures: 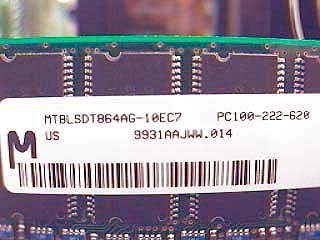 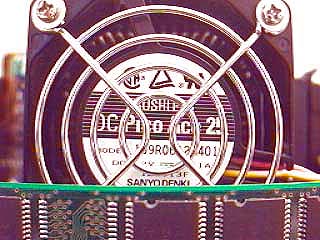 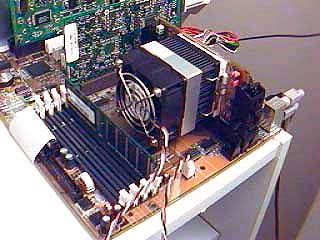 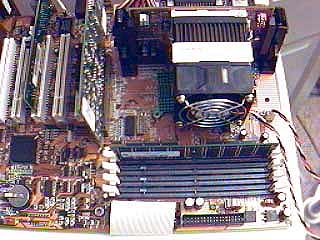 Just a couple shots of the CPU, slotket, cooler, and memory on the board. No problems at all, even with the oversized cooler – there’s more space than I know what to do with between the Slot 1 SC242 connector and the DIMM slots.

This is a small part of an image of the distributed.net client, which measures linear CPU calculations. I have zero faith in the [email protected] program – its founders refuse to put out timely updates to its client programs and its website. If they ever get their act together, I’ll participate. Distributed.net is on top of things, so that’s who I run with. 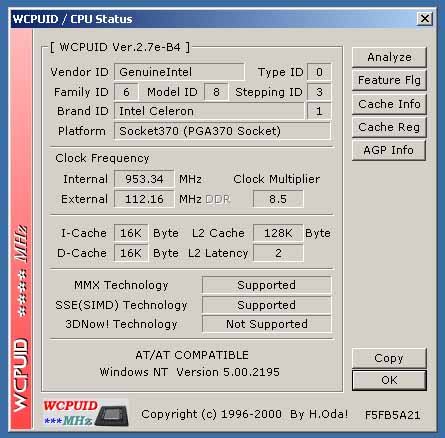 And now for the obligatory WCPUID screenshot…pretty straightforward. All in all, I’ve got to say I’m very happy with this chip. The SenFu water cooling package is sounding pretty good to me right now, so maybe I’ll pick one up and try to take this thing past 1 GHz.

I think the Celeron II is an excellent value for the money and holds its own again regular CuMine chips – though it’s common sense that it won’t be as fast as a regular CuMine. If you’re a gamer, or someone who demands every last ounce of performance out of a unit, go for a regular CuMine with 256KB L2 (like I’ll be doing next month for my other x86 machine) – but, like I said, this is only my webcam machine. It kicks butt at distributed.net RC5 and is stable as anything at 953 MHz.

In the next few days, we should be able to get one or two overclocked Duron systems operational, along the lines of what’s been done by others. We’ll try to document a little better, but we fully realize most overclockers