The good guys at Swiftech were nice enough to send out a sample of their latest product, the Swiftech H20-8500. This is an easy to install watercooling kit which requires almost no case modification – it is possible to install without any case cutting at all, if that’s a problem. For those consumers who wish to get into watercooling but don’t want to do major case surgery, this is worth a look. I’ll take a close look at the kit, then test its cooling performance.

I received a box from Swiftech containing the kit; upon opening, I saw this: 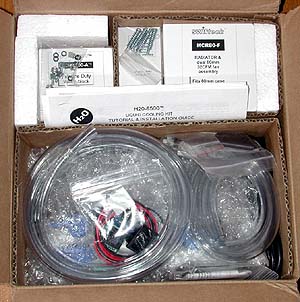 Very neat package with all the goodies snugly packed for shipping – a very nice package (12″ x 12″ x 5″). The kit is comprised of three basic elements: 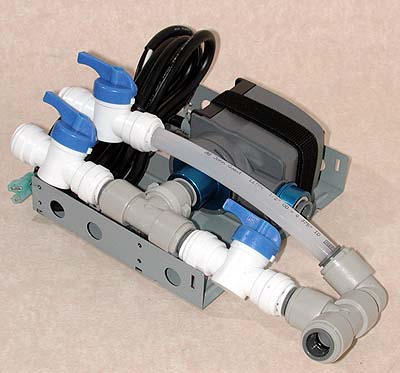 As a kit, the pump is designed to fit into a 5.25″ slot. The pump assembly is higher than a CD ROM, so using the top slot is recommended; if there’s not enough clearance, you will have to use the second slot – I would plan to use two slots to be on the safe side.

The pump assembly includes three valves – these are used to fill and bleed the system with water. I found this easy to do – just follow the instructions (very well done with pics and text). The pump itself (rated at 330gph, 0′ head) 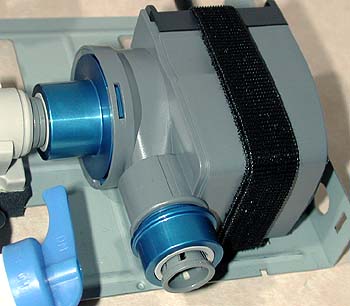 is mounted with velcro strips. Note also that the fittings (blue pieces) are machined aluminum, designed to accommodate the “Quick-connect” system; all tubing is pushed into the fittings (with the exception of the radiator) – no hose clamps required. The pump is rated at about 330 gph – actual flow will be less, depending upon the total system resistance due to waterblocks, radiator, tube radii, etc.

I found the pump to have a slight “rattling” noise – inside a case, it may be barely noticeable. However, there may be a “humming” noise radiated through the case – I would suggest that users might want to mount the pump on some sound absorbing foam if this is apparent 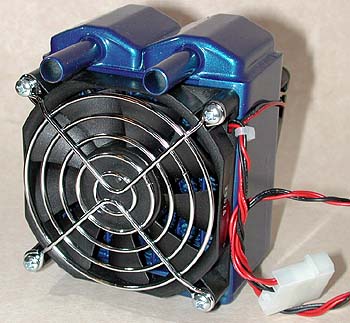 The radiator is small – there are two 80mm fans mounted on it (push-pull). As a kit designed for easy mounting, the radiator is designed to mount in a standard 80mm case fan port. The most logical place would be an exhaust port located at the rear of the case. 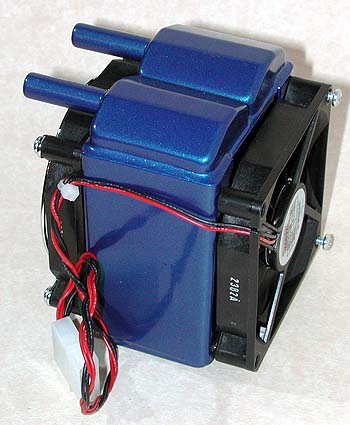 Both fans are powered by one four pin plug. The fans are Mechatronics G8015L12B, 80x15mm, each rated at 29 cfm at 3200 rpm, 32 dBA. They are VERY quiet – when I first powered up the kit, I thought the fans were off. Fan noise was less than 50 dBA, measured with a Radio Shack sound meter 8″ from the fan’s intake and side of the radiator.
{mospagebreak} 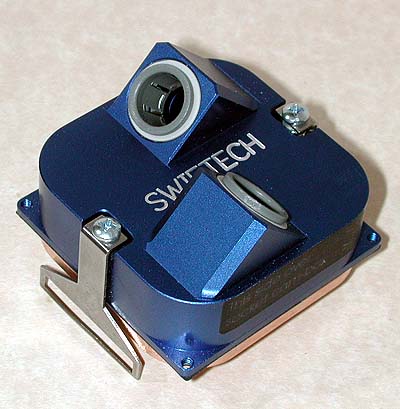 The CPU waterblock is Swiftech’s MCW5000-A; what’s shown here is the AMD configuration which uses the socket’s lugs. For P4 use, users have the option to either remove the P4 retention bracket and use spring-loaded bolts, 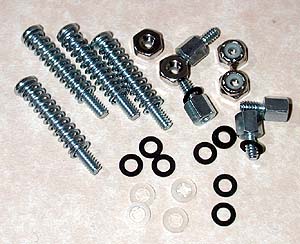 or the P4 retention bracket: 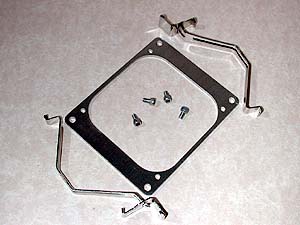 The latter mount is a snap – very easy. Typical Swiftech quality, the base is about as flat as they come: 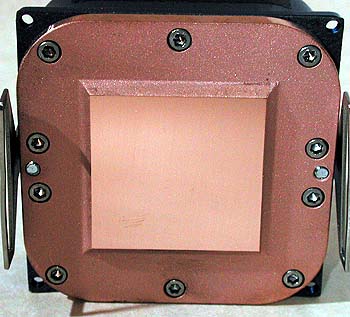 Overall, a nice waterblock and easy to install. 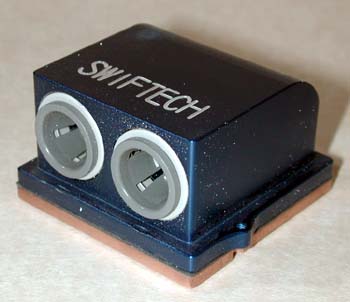 The four grey tubes are for use with the tubing – these are used to ensure that the soft plastic tubing is firmly inserted into the Quick-connect fittings. The GPU waterblock’s base 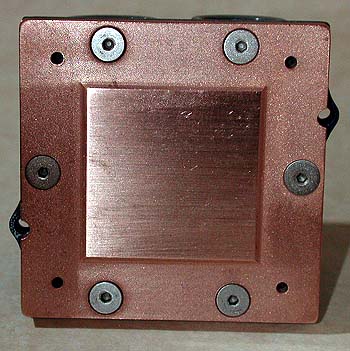 is flat and well done.

The pump is powered by 110 volts (220 Europe) and the kit includes a 12 volts relay which turns the pump on when the PC is powered up: 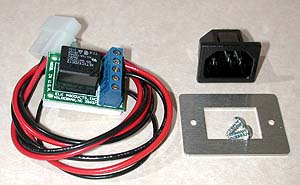 This is the only part which requires drilling the case. On the right is the male plug assembly; the pump will require a separate 110 volt (“mains”) plug, which is included in the kit. The wiring is clearly marked and the instructions are quite clear on what goes where. When first running the unit to fill and bleed the system, it’s wired up so that the pump runs as soon as its plugged into an outlet: 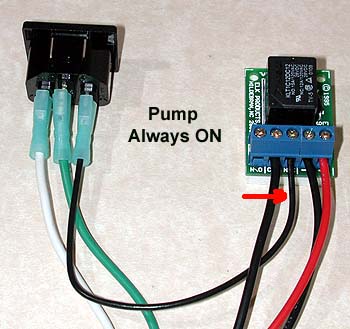 Once the system is charged and free of bubbles, then it’s wired this way: 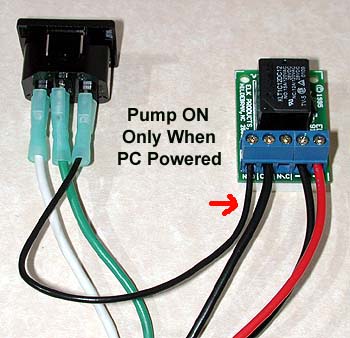 All this is clearly explained in the directions included with the kit.

There’s a slew of parts included with the kit – I don’t think you’ll need to slip out to Home Depot for anything: 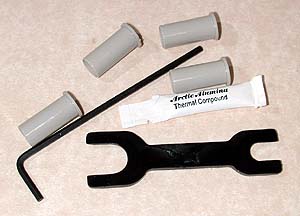 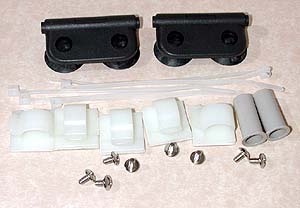 Pump stuff – the feet for the pump are not needed. 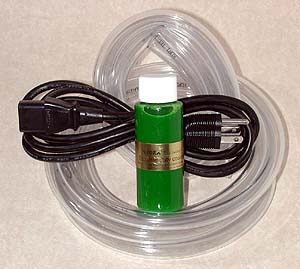 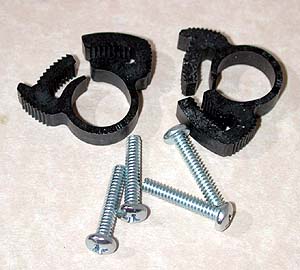 The Swiftech H20-8500 kit was tested on the CPU Die Simulator which gives results that are unaffected by motherboard influences. I did not include the GPU waterblock for this look; in addition, the kit was not mounted in a case – each case will yield different results due to case airflow patterns. To ensure that any pump heat is included in the results, I ran the system overnight and then ran multiple tests with the Die Simulator.

Die Simulator results place the Swiftech H20-8500 kit in the mid rank of kits tested to date (Heatsink Ranking). There is no question that the small radiator and low-noise fans moderate performance. Considering its compact design, performance is quite good.

Swiftech H20-8500 kit is intended for those who want very good CPU cooling with low noise; it is not intended to be a kit for “power users”.

This kit is an excellent balance between ease of installation, low noise and very good cooling performance. Users who might want more performance could substitute higher performance 80mm fans, but then the noise profile increases. It certainly is possible to add a second radiator, which would materially increase performance.

For its target audience, the Swiftech H20-8500 kit is an excellent low fuss entry into watercooling, and can serve as the basis to upgrade with additional or more aggressive components at some future date. I’ll continue to play with it to see how far it can be pushed without too much effort.

NOTE: Shawn installed his AquaStealth placing the radiator at the rear of the case – this avoids dumping warm air into the case interior. Here is how I installed my AquaStealth. I used a new cheap case and some JB