SUMMARY: The Swiftech MC370-2 is a good off-the-shelf socket 370 peltier CPU cooler that performs as advertised. But let’s be clear on what is advertised – it will cool under load to keep the CPU at around room temperature – it will not super-cool under load.

Swiftech was kind enough to send over their MC370-2 peltier CPU Cooler for us to try out. It features a 78 watt peltier if you run it at 14 volts, 8.5 amps. Unless you use a 14 volt power supply, it will run at less than its rated power. The heatsink to which it is attached is about the same size as the Alpha, although the fan is way more powerful and noisy – 33 cfm @ 43 dBA. I particularly liked the mounting clips, although it can be very easy to over-tighten them and break off the plastic mounting lugs on the socket. The kit (pic below) includes detailed instructions, mounting clips, an allen wrench, two neoprene insulation patches and a tube of thermal paste (AOC HTC – very good stuff). 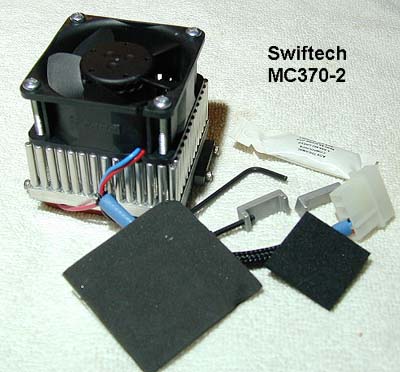 What surprised me is the MC370-2 does not use a cold plate; the peltier is in direct contact with the CPU cap (pic below). Most peltier rigs I have seen and used include a cold plate which acts as a “buffer” between the CPU and peltier. This provides a reserve of cooling capacity available to the CPU when needed, as the peltier does not “store” cold to any significant degree. This should not make a difference under continuous load, but does serve to moderate temperature swings under varying loads. 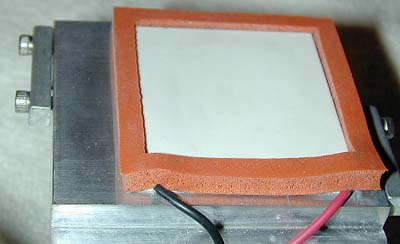 The MC370-2 is well made although some areas need additional attention by the user. The enemy with any peltier is condensation and the instructions very nicely lay out what additional steps are needed to control it. As the pic below shows, there is a slight gap in the gasket where the peltier wires exit – I would recommend a squirt of silicone to seal this gap. The peltier element is not potted (i.e. sealed – if it is not sealed and moisture collects inside the peltier, it will short out) so every precaution should be taken to prevent condensation. 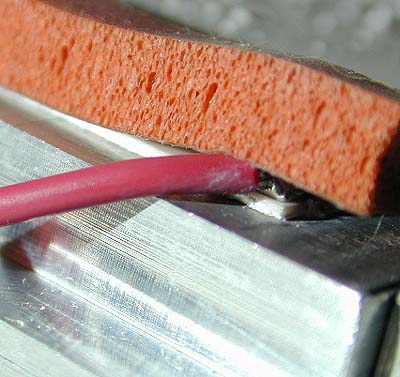 The instructions clearly recommend sealing the socket with silicone to prevent condensation from shorting out the CPU. The recommended steps include:

Steps 1, 3 and 4 are no-brainers – just be careful that you don’t get any silicone between the movable top of the socket and its base – silicone is glue after all. 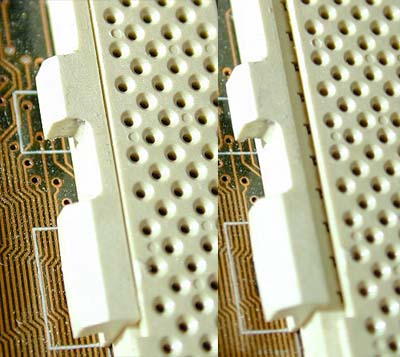 In addition, if you look at the socket’s base, you will notice that it is not mounted flush to the motherboard – effective sealing of each side is required. However, if you do this, you will be gluing the socket’s lever – silicone is great because you can always cut it away fairly easily, but don’t think you can change CPUs all that easily. In sum, effective condensation measures means you must virtually seal the socket with silicone up to the base of the heatsink. I feel anything less is a prescription for problems and potential disaster. The alternative is to craft something from foam encapsulating the socket.

I used a slotket with a C366 with my ABIT BX6-2 to test things out. I ran into a potentially serious problem here. I decided to mount the MC370-2 using the large plastic lugs on the socket; the heatsink’s brackets are movable (remember the allen wrench?). When I first fired up the system, it booted fine. As Windows started, it froze. I killed the power and looked things over – I could not see anything wrong. I took off the heatsink and made sure the cold side was facing the CPU – no problem there. I re-mounted it and tried again – same thing!

Thinking that there might be something wrong here, I tested it on my peltier heatsink rig – no problems! What is going on?? I looked even more carefully at how it was mounted and discovered that the diagonal pattern allowed the peltier to lift ever so slightly from the heatsink’s base. This resulted in ineffective peltier cooling such that it in fact the cold side got hot! Luckily I did not fry the CPU. However, I did find that the thermal paste between the peltier and the heatsink’s base was very thin, so I corrected it.

I would strongly caution anyone mounting the MC370-2 diagonally using the large lugs – synching up the diagonal forces such that the peltier is perfectly parallel to the CPU and heatsink base is difficult and may not be possible. Checking whether of not this mounting method is successful is inherently dangerous. I do not recommend this mounting method. Swiftech has posted a Technical Bulletin which recommends a fix, but it did not work for me. I used the smaller centerline lugs without any problems. Once again – do not over-tighten the mounting screws.

The instructions state a performance range of 3 C to 18 C at a case temperature of between 20 and 30 C using software cooling programs such as Waterfall and CPU Idle. I found this representation to be “in the ballpark” of what the MC370-2 could deliver, as indicated in the table below:

There is no doubt my C366 @ 567 MHz runs much cooler than what I could achieve with an Alpha (19 C cooler). I could not run the C366 any faster than what I could achieve with top-rate air-cooling, but it does run cooler. Note that I did these tests with the case open and still saw system temps in the mid 30s C – unless you construct some kind of vent for heatsink waste air, your case will run hotter and a closed case will compromise the performance you see here, depending on how effectively your case vents air.

Let me be very clear about what was accomplished – this is not super-cooling. If you expect the MC370-2 to substantially cool your CPU below ambient temps, you will be disappointed. Swiftech does not represent that it will and it does not. The MC370-2 will dump a lot of hot air into your case. A power supply of less than 300 watts will most likely not support this peltier. Using a CPU Idle program is not recommended as it will introduce extreme temperature stresses to the CPU, shortening its life.

Peltier cooling is a technology that requires careful preparation and thought about what objectives you are trying to meet. I would recommend anyone contemplating using a peltier do some background research (lots of peltier links in Cool Links) before proceeding. The Swiftech MC370-2 is a viable approach within the operating range specified and under the caveats listed with this review. Swiftech has done a good job by being up-front about what is required and what performance to expect with the MC370-2 – I wish more vendors would do the same.

NOTE: I did not test the MC370-1, but based solely on its specs (32 watt peltier) I believe it would be an ineffective product for serious cooling (the C366 puts out 33.6 watts @ 567 MHz and would overwhelm the peltier’s cooling effect).

Self Made Giant Air-Cooled Heatsink for Socket 370/7