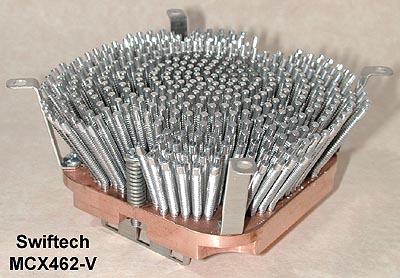 The good guys at The Heatsink Factory were nice enough to send us a sample of Swiftech’s latest, the MCX462-V. This is a bit of a departure in Swiftech’s usual design as the pins are fanned out in a radial pattern – clearly visible when looking down into it: 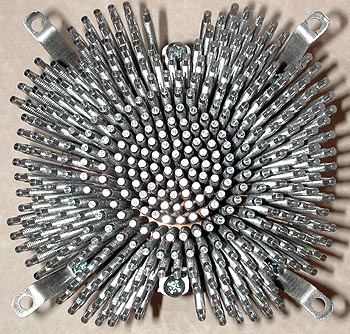 This design is intended to maximize performance at lower fan speeds.

The Swiftech MCX462-V ships with additional brackets to mount an 80mm fan: 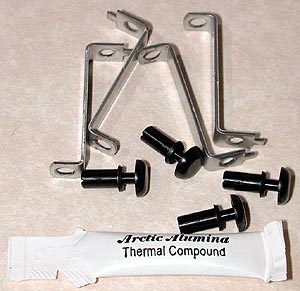 The plastic push-pins are used to mount the fan to the brackets. Changing the brackets simply involves unscrewing the 92mm mounts and replacing them – not particularly difficult.

The base is a all copper and extremely well finished: 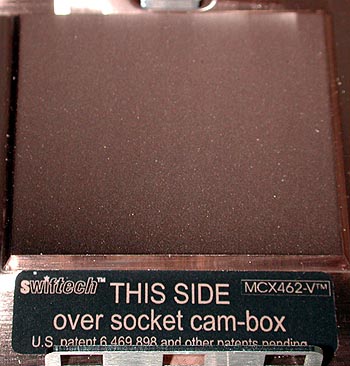 This is one of Swiftech’s strong points – lapping is definitely not recommended or required.

The clip is a good one: 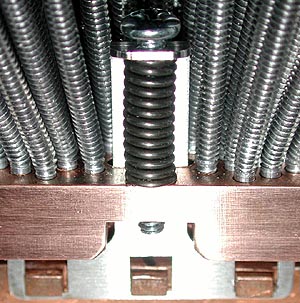 It’s easy to mount, engages all three socket lugs and very secure – once mounted on the socket, simply unscrew the bolts until they clear the top of the clip – done! Mounting the heatsink requires that you first mount it without the fan, then install it once it’s on the socket. I think it’s easier to use long bolts rather than the plastic pushpins, but that’s me.

The MCX462-V was tested on the CPU Die Simulator which gives results that are unaffected by motherboard influences.

I measured noise using a Radio Shack sound meter placed 8″ from the fan’s intake – noise levels are included in the table below. Heat generated by the die tester during testing averaged 69 watts.

Simulator results place the MCX462-V in the top rank of heatsinks (Heatsink Ranking) tested to date. However, performance depends upon your noise preference: the less noise, the less performance – no surprise here.

Swiftech’s MCX462-V is an extremely well built, high performance heatsink, if noise is NOT an issue. The more you “detune” the heatsink by using a slower turning fan, the less you get for your money.

Swiftech has designed this heatsink as an answer to those seeking very good performance at lower noise levels; using a high energy fan, such as the Vantec Tornado, is certainly possible, but most users are turning away from overly noisy fans.

Test Results show that detuning aggressiver fans, such as those used above, turns in very good performance at acceptable noise levels (0.30 C/W @ 62 dBA – note that these sound measures are 8″ from the fan’s intake¹).

As a second series of performance tests, I ran the Swiftech’s MCX462-V with a number of low noise fans.

The MCX462-V was tested on the CPU Die Simulator which gives results that are unaffected by motherboard influences.

I used five low noise fans for this test:

I measured noise using a Radio Shack sound meter placed 8″ from the fan’s intake – noise levels from all fans was less than 50 dBA with the exception of the Sunon; either one of these will range from virtually silent to low noise (in order of rpm). Heat generated by the die tester during testing averaged 69 watts.

Users can compare these results against comparable heatsinks HERE.

Swiftech’s MCX462-V is an extremely well built, high performance heatsink, if noise is NOT an issue (see page 1). Running it with low speed fans does compromise performance, as it will for any heatsink. However, the difference between top rank performance and low noise is only 6C – not a terrible price to pay by any means.

For a balanced approach between performance and noise, an 80mm fan spinning at something like 3000 rpm appears as a good choice.

Restoring A Heater Core For Use As A Radiator

One of our next stops was to catch up with our friends at ADATA, and they had a lot to share. We saw Mera, a new brand ambassador, and a couple of collab builds the Se920 external PCIe 5.0 hard drive and an unnamed(?) PCIe M.2 drive with active cooling. Like many others companies we visit, there’s a lot to unpack here.