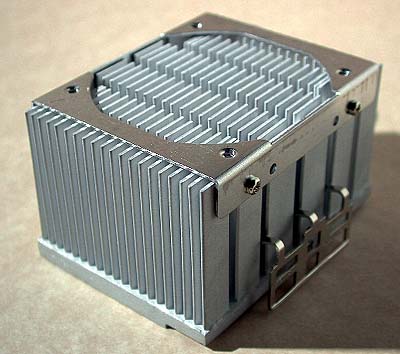 You’ve all seen fans before – this is more interesting.

Taisol has come up with a very nice heatsink – model # CGK742092 (you would think they could call it something like the “Coolerator”). It is made in the same manner as the Alphas – a forged product. This means that they use a hydraulic press and basically squeeze a piece of aluminum into shape. This means no joints (like the Hedgehog) and a greater pin density (= more surface area) than an extruded product.

I purchased the base model that comes with the usual puny 60x15mm, 21 cfm fan, and I did not bother to test it. I tried three different fans: ADDA 28 cfm, Papst 33 cfm and Delta 38 cfm.

This is a BIG heatsink – note that it extends BEYOND the socket into the “safe” area (where the four holes are located) per AMD’s spec. The base measures 80 x 60 mm (3.2 x 2.4 inches) and weighs 248 grams (1/2 lb). As long as the motherboard manufacturer stays within this spec, the Taisol should fit (fits on the space-constrained ABIT KT7 – I tried it). I think we may see more heatsinks using this larger footprint.

The Taisol sports 120 fins; I estimated a total fin surface area of about 137 square inches, or 0.95 square feet.

If there’s one thing that gives people more fits about almost all Socket A heatsinks, it’s the clip. AMD’s clip pressure requirements result in clips that are difficult to engage and almost impossible to remove once installed in a case (notable exception: Swiftech MC462). The Taisol’s clip is a good example of a design that, while still more difficult than we are used to, is a bit more manageable than some others.

More Than You Ever Wanted To Know About a Clip

The Taisol clip has an opening in which you can insert a screwdriver to install and remove the heatsink without too much pain.

One nice feature is that the clip engages all three socket lugs (the SOYO uses only two lugs, most use three) so it is quite secure and, should you somehow break one lug, the socket is still usable. 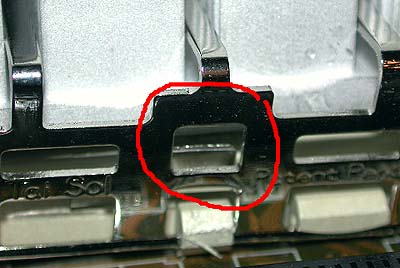 If you look closely inside the red circle, you can see that there is a lip for the screwdriver’s tip. 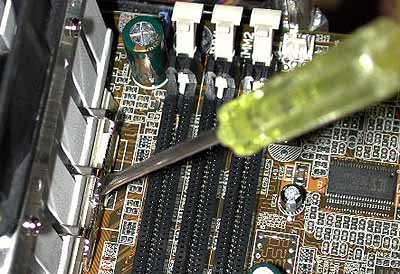 You place the tip into the hole, making sure that the tip engages the lip inside the hole. Absolutely a must: Use a screwdriver with a tip small enough to go through the hole! If you slip, who knows what damage might ensue when you hit the motherboard. 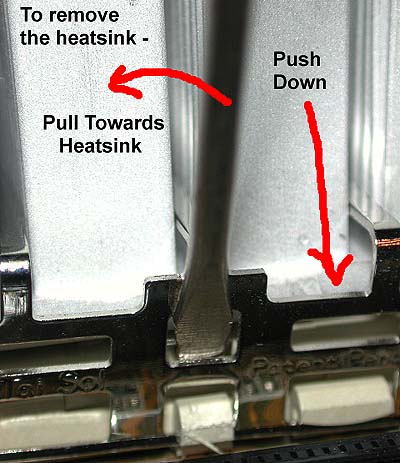 If you look at other heatsinks, you will find some that have the same arrangement, so you can use this technique on them also.

I marked where the CPU would contact the base, drilled a 1/16″ hole, inserted a thermocouple and epoxied it into place. After it set, I lapped the heatsink’s base so the thermocouple would be flat to the base. The base could stand some lapping in any event, but I did not want to “overlap” it and distort results. I used the Omega HH23 Digital Thermometer to measure temps. Ambient temp was measured by a thermocouple placed about 1″ from the fan’s intake.

What surprised me was that there was little difference between the Delta and Papst fans. I repeatedly cycled the two fans to see if it was some kind of fluke, but after 4 paired tests and similar runs on the ABIT KT7A, I continued to get the same results. Although there may be a slight advantage to the Delta 38, I do believe that the Delta is not worth the noise.

Impressive performance! C/Ws in the 0.23 to 0.25 range place the Taisol in some select company – this is as good as the Global Win FOP series and certainly places it squarely as equal to the Alpha’s performance. I think forging enabled the Taisol to pack a lot of surface area into a small package, with obvious performance advantages.

The Taisol CGK742092 is a fine performer and widely available. With some lapping, you might squeeze a little bit more out of it. How much noise you’re willing to tolerate determines how well it will do for you. Overall, a price/performance winner.

I bought my first Pentium II / III motherboard eight months ago. I decided to go for a Celeron 466 PPGA processor mainly for it’s affordable price. I wanted to do some overclocking, but found out that the 466 could

SUMMARY: A very elegant design resulting in top rate performance in a small package. Andy Lemont over at Millennium Thermal Solutions is close to launching his first entry into the heatsink market and it’s a beauty. He was kind enough