Today, we are reviewing a unique RGB solid-state drive from Team Group. Announced in September, the redesigned T-Force Delta MAX is one of the most original creations we’ve ever seen in the hard drive market. It has addressable RGB LEDs and implements a mirror-type light diffuser. Team Group delivers a piece of RGB artwork that’s sure to be an eye-catching element of any high-end computer build.

Here at Overclockers, however, we’re interested in more than just a flashy exterior. Follow along as we take a look at the overall performance and see how it stacks up against other high-end SATA drives on the market today.

Built around Silicon Motions’s SM2258 controller and Micron 3D TLC NAND flash, the Delta MAX is at the top-end of consumer-grade SATA 3.0 drive speeds. In terms of raw performance, the drive is rated for up to 560/510 MB/s sequential read/write speed and up to 90K/80K random read/write IOPS. From a technical specifications point of view, it’s right up there with other high-speed SATA 3.0 drives.

For raw performance, most computer enthusiasts will inevitably turn to modern NVMe drives. While it may not tout read and write numbers like NVMe drives, the T-Force Delta MAX makes up for that in spades with its unique RGB implementation.

This drive features a large blue colored, mirror-like surface that covers one entire side of the drive. Without even powering it on, this drive makes a statement with a large T-Force logo in white located at the center. Placing addressable RGB lighting on SSD’s is a relatively new concept; however, Team Group takes it a step further by making the entire side of the drive one large RGB display. The visible RGB area measures 57 x 92 mm and is by far the largest illuminated area for any SSD in the industry.

In terms of the product lineup, the drives come in three different capacities of 240GB, 500GB, and 1TB. With its mirror-like finish, the drive only comes in one color. Today we will be reviewing the 1TB model.

Due to the RGB lighting, this drive is slightly thicker than the typical 2.5″ SSD. While a standard drive measures 7 mm, this drive measures 9.5 mm. The difference is quite small, but it should be a consideration when purchasing, especially if the intended usage is placing the drive in a tight rack or cage.

There’s no question as to what lurks inside the box. The Delta MAX comes safely packed inside a sturdy box with high-resolution glossy pictures of the device on the front. On the backside, we a plethora of information, including a quick overview of the RGB sync cable methods.

The Delta MAX rests comfortably in a hinged style presentation box. Opening the box we are greeted with a feeling of quality, which is not something we would expect from a solid-state hard drive. This is the type of packaging we might expect to see on a high-end motherboard or graphics card, not a humble computer accessory. 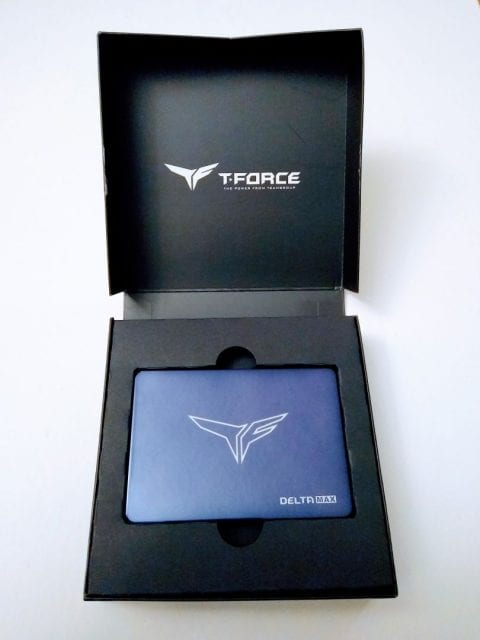 When the power is off, the Delta MAX has a mirror-like finish. There is no typical white plastic light diffuser, and indeed you wouldn’t even know it’s an RGB hard drive without powering it on.

The drive is not illuminated at all from SATA power. We didn’t expect this and found this to be an interesting development. In order to make the drive light up, it needs to be connected with one of the included synchronization cables.

As we have become accustomed to seeing, the drive comes from the factory with a built-in rainbow-like color-shifting effect. The factory rainbow effect moves the outside of the drive as if the center TF logo is the axis of rotation.

The drive uses a whopping 20 programmable RGB LED’s and also a custom diffuser panel to even out the hot spots. The result is nothing short of stunning to behold. In the right lighting, the individual LED’s can become visible, but the diffuser does an excellent job of hiding those pesky hot spots. 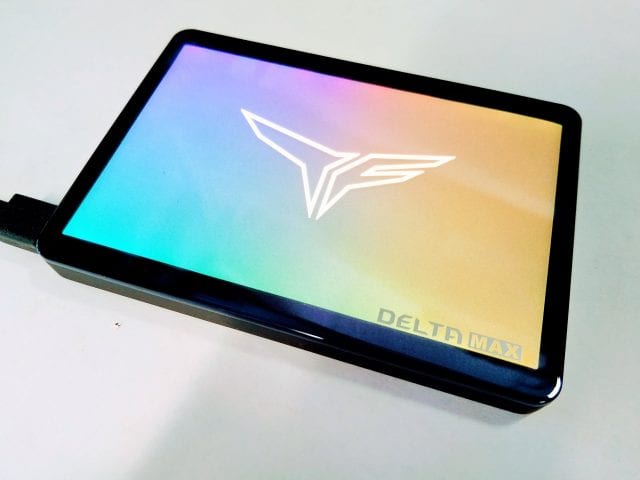 One thing we noticed about the factory rainbow color profile, is that blue and purple seem to be the predominant colors. If you don’t like factory programming, you can quickly and easily change it and customize it to your liking, which is part of the fun of owning RGB equipment.

Team Group offers a nice piece of free software that applies to the Delta MAX RBG SSD. To measure drive temps and overall health, Team Group has a nice utility. Aptly named the SSD Toolbox, this utility has includes all the built-in features you need to check the status of the drive. We tested Version 5.13 with Windows 10.

Below is a screenshot of the SSD Toolbox software. This is how the drive comes from the factory, before any formatting or usage. 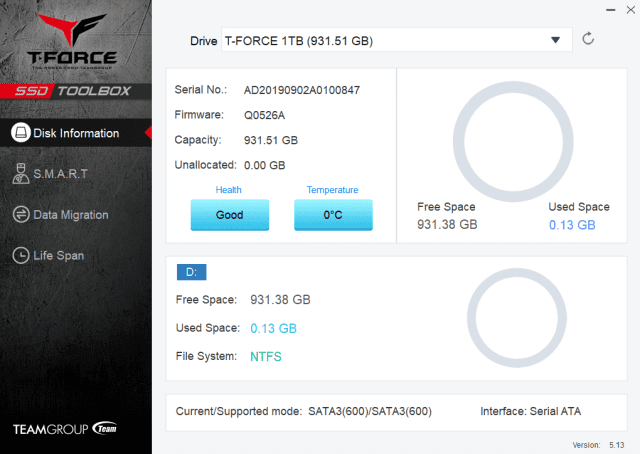 To get the most out of this drive, users might want to take control of the RGB LEDs and customize the look. To control the lighting of this drive, we used the motherboard control software. In our case, the ASRock Polychrome RGB software was able to control the drive, and we were able to sync it up with other elements.

To test the drive, we will install it in our system as a secondary drive and run benchmarks programs on an empty drive. Under normal conditions, many users would install their OS on the drive. However, for our tests, we wanted to isolate the hard drive to maximize the performance and reliability of scores.

There are no big surprises here, and our CrystalDiskMark results landed right where we expected them to. Recalling the factory rated speed for a sequential read of 560 MB/s, and the sequential write of 510 MB/s, our results mirror this nicely.

Looking at all the other drives we tested, the T-Force Delta MAX RGB put up a good fight. Our drive, as tested, was comparable to all other drives, with the exception of 4k testes. In the 4K Q32T1 write test, our drive came in far behind the pack. For consistency sake, we ran the test 5 times and averaged the results.

Our drive held up admirably in the AS SSD benchmark. Similar to CDM, the sequential reads and writes are close to the other drives we tested. However, when it comes to multi-threaded 4k read and write tests, our drive falls behind the pack.

At first glance, a 6% drop in performance compared to other drives might seem significant; however, this benchmark represents the worst-case scenario.

Lastly, we will take a quick look at the drive performance in Anvil’s Storage Utility. The tool can monitor and test read and write speeds on hard drives and also produces an output performance score for comparison. It’s a great utility that also provides further information such as partition and volume information.

Our experience with the T-Force Delta MAX RGB SSD is undoubtedly positive. Team Group brings innovation and creativity to the SATA drive market with its latest release. The lighting effect and transition of color is incredibly smooth; it’s almost as if there is an LCD screen paired with the drive. As if the RGB element was not impressive enough, they went ahead and rounded out the design with the transparent mirrored surface.

Since their release, we have seen NVMe drives take center stage in the computer storage realm. However, the humble SATA drive is often a go-to option for bulk storage solutions. So, it’s no wonder that Team Group and other companies are creating new and innovative designs to garner a larger share of the storage market.

With Silicon Motions’s SM2258 controller and Micron 3D TLC NAND flash, it’s all but guaranteed to be comparable with top-performing drive for the form factor. In our testing, this drive consistently scored within 5% of other top performing drives. For a SATA drive released in 2019, we expected it to be fast, and we were not disappointed.

Coming in with a price tag of $149.99, the Delta MAX RGB is at the very top of the price bracket for similar speed drives with a capacity of 1TB. Other drives in this performance category sell for anywhere between $100 to $150. Is the unique styling and unprecedented RGB element worth the extra $50? We’ll leave that for you to answer, but we highly recommend this drive if you are looking for speed and eye-catching styling

Computer cases have been around since the pc age and now it’s a huge market geared towards the pc builder. There is literally a plethora of brands, sizes, styles and colors to choose from. IN-WIN has been around for quite sometime no doubt, and their quote states: “Contemporary & Innovative”

Today, we review XPGs new ATOM 30 Kit. This dual SSD kit includes an XPG ATOM 30 1 TB PCIe Gen 3 NVMe M.2 and an ADATA SU670 250 GB SATA SSD. Packaging two drives together, XPG has created this as a dual system upgrade kit for older laptops or aging desktops that just need something a little more. The ATOM 30 is the little brother to the ATOM 50 SSD that we reviewed earlier this year. With the ATOM 30 being a PCIe Gen 3 version we should expect a slower drive than the ATOM 50 and a price tag that is budget-friendly. In this kit you also receive a 250 GB ADATA SU670 SATA drive. While much slower than an NVMe they still pose a great upgrade for a dated mechanical hard drive commonly found in laptops or prebuilt desktops.

Today we are reviewing a newly launched RGB solid state drive from Team Group. Announced in September, the newly redesigned T-Force Delta MAX is one of the most original creations we've ever seen in the hard drive market. It has addressable RGB LED's and implements a mirror-type light diffuser. Team Group delivers a piece of RGB artwork that's sure to an eye-catching element of any high-end computer build.