Today, Teamgroup announced the T-Force Vulcan G solid-state drive which they say reaches up to 550MB/s and 500 MB/s (Reads/Writes) which is 4x faster than traditional platter hard drives. The Vulcan G will be available in 512GB and 1TB versions starting at $61. Here is the official release from Teamgroup. 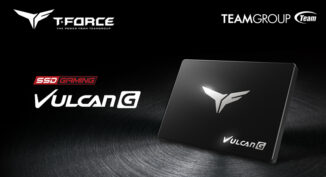 The T-FORCE VULCAN G Gaming Solid State Drive has a minimalist design. The T-FORCE logo is printed with a unique diamond cut pattern for a sophisticated and sleek look. It is also available in capacities of 512GB and 1TB, and uses SATA interface and 3D NAND flash memory chip, making it 4 times faster than traditional hard drives in read and write speeds. With up to 550MB/s and 500MB/s, gamers will experience a significant performance jump.

Click here to learn more about the Teamgroup Vulcan G.

Today, Corsair announced the launch of the MP600 PRO LPX M.2 SSD. Boasting speeds of 7,100 MB/s sequential reads and6,800 MB/s sequential writes, the newest MP600 will be a major upgrade for any gaming system. That includes your PlayStation 5. That’s right, the MP600 PRO LPX is designed for your gaming PC as well as your new PlayStation. Storage capacities range from as low as 500 GB and go all the way up to a staggering 4 TB. Corsair is currently selling the MP600 PRO LPX on its website and pricing ranges from just $99.99 for the 500 GB up to an equally shocking $784.99 for the 4 TB. Below is Corsair’s official press release.

One of our stops at CES 2017 led us to our friends at Mushkin and Edge. Mushkin showed off a new m.2 2280 PCIe 3.0 x4 SSD drive named, Helix. It uses a Silicon Motion SM2260 SSD controller using 3D MLC flash. This brings speeds of up to 2500MB reads and 1100MB writes along with 185K write IOPS. The 3D MLC NAND is going to give you more performance and endurance versus TLC based NAND. We should expect to see this drive hit the market in the coming months.

Thanks for the heads-up. Yet again another demonstration of SSDs being a strong player, especially pricewise, in the storage market. These are about 30x cheaper than my first SSD. And with 150-300 times the capacity. I guess about a dime a gig is going to be where prices settle for a while?