SUMMARY: Top Rank CPU cooling for AMD or Intel, depending on noise preference. 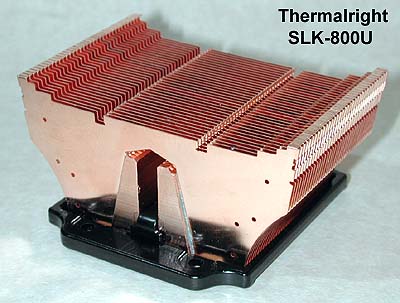 A while ago we took a look at the Thermalright SLK800. Not one to stand still, Thermalright has superseded it with a new version, the SLK-800U. The major difference between them is that the SLK-800U is larger and the mounting system improved over the previous version: 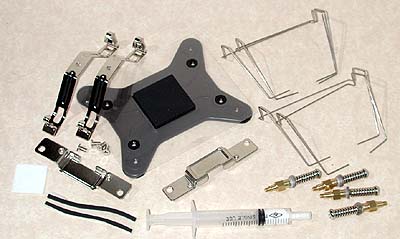 Note that the SLK-800U’s base does not fully contact the P4 IHS.

The fan is mounted using wire clips (for 70mm and 80mm fans). Also included are foam pads for AMD CPUs, mounting guides for P4 use and a tube of generic white thermal grease. Detailed mounting instructions are HERE. Note also that some motherboards may require “custom standoffs” – some are listed HERE. In addition, some motherboards may have motherboard components close to the mounting hole – some care must be exercised in this event.

The base finish shows signs of polishing marks: 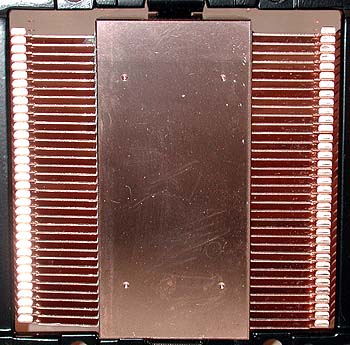 I could both hear and feel ridges on the base; lapping will improve performance.

One notable factor in the SLK-800U’s favor is the amount of air flowing down through the fins from the 80mm fan overhanging the heatsink’s sides – the top measures 87 x 56mm. There is a significant secondary cooling benefit as a result, and components around the heatsink should run cooler. In addition, since the motherboard acts as a secondary CPU heatsink, there will be a positive impact on CPU cooling.

I measured noise using a Radio Shack sound meter placed 8″ from the fan’s intake and recorded noise at a number of rpms – these should not be far off the mark far other 80mm fans at similar rpms (Note: Manufacturers meter sound at 3 feet from the fan, so the dBAs I measured do not correspond to the manufacturers’ ratings – I have normalized my dBA readings for reference).

The SLK800 was tested on the CPU Die Simulators which give results that are unaffected by motherboard influences. I then tested it on an Acorp 4S845A motherboard with a modified P4 1500 to read CPU case temps as an example of what users might see on a P4 system².

¹ The first number is the actual reading, the second normalized to the fan’s dBA rating.

Die Simulator results place the SLK-800U, running at about 5500 rpm, in the top rank of heatsinks (Heatsink Ranking).

The difference between aggressive cooling/high noise and “reasonable” cooling/low noise is about 5-6 C over 100 watts. For a CPU radiating half that, the difference starts to fade very quickly (note: 38 dBA is the generally accepted “office” noise standard for PCs).

Thermalright’s SLK-800U is an excellent choice for aggressive CPU cooling. However, the more aggressive the fan used, the higher the noise level – no surprise. At a minimum, a rheostat might be required if your PC is “24-7”.

The SLK-800U is available from The Heatsink Factory.

² Wiring to read internal Socket A temps precluded mounting the backplate on my Shuttle AK3.1.

At present, to cool my T-Bird 1333 CPU, I am using an OCZ Gladiator II, with a 42 cubic feet, black label monster! Which, as per what you read on web sites, is VERY LOUD. The Quote “YOU GET USED

What to do with a spare fridge – Virgil Scott