SUMMARY: A contender for “Top Dog” – Thermalright’s SLK600 tests out as one of the best. 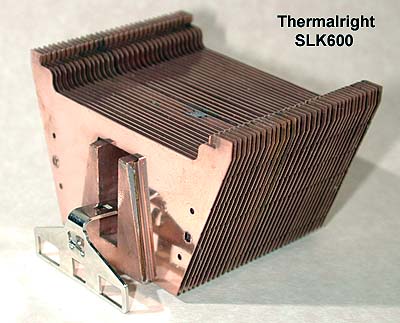 The good guys at Thermalright were nice enough to send a prototype of their SLK600 – basically an SK6 on steroids. The SK6 is one of the best heatsink around, and Thermalright has designed an “upgrade” that may take top honors in the rankings. Since this is a prototype, the key is how well this design translates to production.

I don’t see anything particularly challenging from a manufacturing standpoint, but until we see production versions, we’ll reserve final judgment.

Construction is very interesting; the SLK600 extends a beefy copper base up into the fins – sort of like a pyramid shaved off at the top. From the front 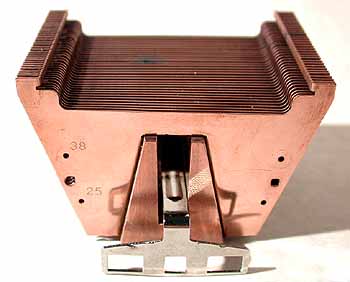 The “25” and “38” mark pin positions to hold 25mm and 38mm fans to the heatsink; fans are held on by wire clips inserted into these holes.

you can see how the base extends up to almost the top of the fins, which are soldered onto it. It’s split in the middle for the clip channel. 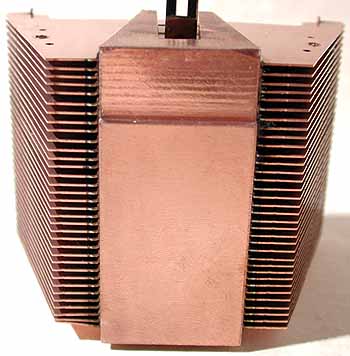 is nicely finished – flat with slight machining marks. The “pyramid” measures 26mm wide at the base, tapering to 14mm at the top. It’s 32 mm high by 56mm long and 8mm at its thickest point. This beefy pyramid conducts heat from the CPU core to the fins – 34 in all. The fins are about 1mm apart.

Also note that there is a lot of air flowing down through the fins onto the CPU carrier and motherboard components, adding to cooling efficiency.

The clip engages all three lugs – good! The clip requires a screwdriver – not so good! On balance, however, I’ll take a 3 prong clip with some effort for a heatsink of this size. I did not find it difficult to mount or unmount.

Overall, Thermalright has successfully extended the SK6 “franchise” with the SLK600 (assuming production units are similar).

The SLK600 was first tested on the CPU Die Simulator which gives results that are unaffected by motherboard influences. I then tested it on an Iwill KK266+, modified to read AMD’s on-die diode, as an example of what users might see on their systems.

Die Simulator results place the SLK600, with the ultra-noisy Delta 44, in the top rank of heatsinks (Heatsink Ranking). With the more tolerable YS Tech, the SLK600 ranks among the best of heatsinks tested.

Interestingly, the difference between a relatively quiet YS Tech 26 cfm fan and the noisier Delta 38 is not that great. Users might consider using a rheostat on the aggressive Delta 44 or Delta 38 to moderate noise as requirements dictate. For users seeking superior performance at low noise levels, the SLK600 with a 26 cfm fan looks promising.

A superb design with superb performance, Thermalright may have hit a homerun with the SLK600. A heatsink for all reasons?

When the SLK-600 arrived yesterday, I thought “Gee, it looked bigger in Joe’s article. How can such a little package perform so well, and with only a 60mm fan!?”

An accepted tenet of Overclocking is that “Bigger is Better”, right? Well, a famous man once said: “It’s not the size of the dog in the fight. It’s the size of the fight in the dog.” Thermalright has once again dealt us a good, forward-thinking design in the SLK-600. That is, assuming the production units wind up being the same as this pre-production unit.

As I said, the size is deceiving. Look at it compared to my favorite HSF, the Swiftech MC-462A:

As I examined the SLK-600, I was once again happy to see the three-lug retention clip. Some day, all HSF manufacturers will wake up to the obvious benefits of using a three-lug clip as opposed to the single-lug. I was not happy to see (with some difficulty) and feel the milling grooves in the baseplate: 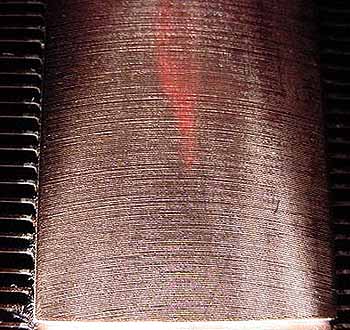 When you buy one of these, the first thing to plan on is lapping it to get rid of those grooves. Even Arctic Silver 3 has its limitations! In conversation, I refer to these kind of mill marks as “The WashBoard Effect”: 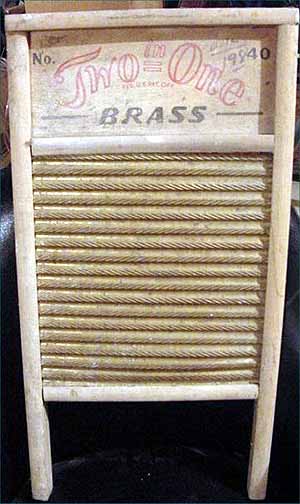 Unless you plan to appear on the 34th Anniversary reunion of Hee Haw, playing the tenor heatsink, this is not a good thing to have.

Here’s the result of 15 minutes with 600 grit Wet-or-Dry sandpaper: 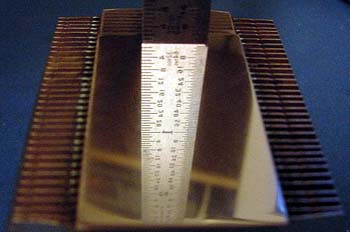 In benchmarking, the SLK-600, unlapped, ran an average of 2C hotter than after I lapped it. Every HSF has it’s plusses and minuses. Other than being limited to a 60mm fan, the baseplate finish was the only area I found in need of improvement.

Overclockers will generally take any reasonable (and a few unreasonable) opportunities to improve the cooling of their CPU. The SLK-600 takes advantage of the fact its substrate carrier (upon which core resides) serves as a cooling path, as well as the core surface itself. The tapered base allows a lot of air from the fan to blast down upon the substrate carrier part of the CPU: 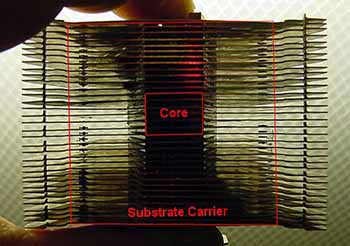 Some Overclocking purists used to scream “Foul Play” at this approach, but let’s be honest here: The ends (cooler core) justify the means. I’m personally, not too proud to take a freebie. The point is, this is not some accidental benefit from a quirky engineering design. This was obviously part of the design philosophy from the get-go.

In regards to the fan: I’m usually not at a loss to be able to see “Outside the 9 Dots”, but I can not conceive of any possible way to adapt this unit to an 80mm fan. Besides, with an 80mm fan, a lot of the air would blow outside the area where it’s most needed, while the bigger dead-zone of an 80mm fan would rob an area most in need of air.

I did not spend a lot of time pondering an 80mm fan solution to the Delta 60mm 38cfm “Screaming Mimi” fan issue. I’ll leave all of you “Walter Mitty” types to while away the hours figuring that one out.

The following benchmark results speak for themselves. Many of you saw my test setup detailed in the Heatpipe Article I recently wrote. If you have real good eyes, you would have seen the 25-turn potentiometer I use to precisely control the core voltage: 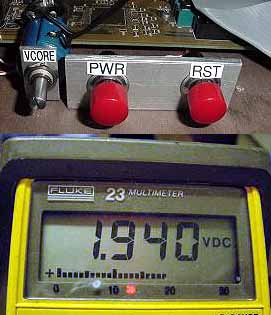 It allows me to slowly drop the core voltage until the overclock becomes unstable and then raise it back up until it regains stability. It is much faster than having to reboot and reset the core voltage in BIOS, or fiddle with a hard to reach trim pot down on the motherboard. When you see a value like 1.74V in the benchmark results, rest assured that the core voltage, which I measure right at the socket, is indeed 1.74V.

Speaking of benchmarks, here’s the payoff!

As you can see, the performance lead that the MC-462A has held at the top of the HSF “Food Chain” is slowly dwindling. Whereas the MC-462A gets its performance from simple “Brute Force” design, the SLK-600, with its “Creative Engineering” approach, is nipping at its heels.

Throughout the past year or so, the State of the Art in HSF design has advanced in quantum leaps and bounds. With this accelerated evolution in design approach throughout the industry, all that can be said for the MC-462A is:

“Heavy Hangs the Head that Wears the Crown.”