The Thermaltake Riing 14 LED RGB TT Premium Edition 3-Fan Pack is a mouthful to say. The kit is a handful handful coming out of the box, but it is an eyeful to see in action. This trio of fans offer ring shaped LED’s in 256 colors. We will look at the software that gives us those 256 colors, as well as controlling the fan speed.

The kit was designed for radiators. Since it contains three fans, you can say it is being sold for triple 140 mm radiators. That would be one big rad, but you can use it for smaller sizes as well, but would have an extra fan, or two. That means you can use some or all of these fans as case fans, rather than radiator fans. Since you might use them on rads or on cases, we will look at the fans as fans. 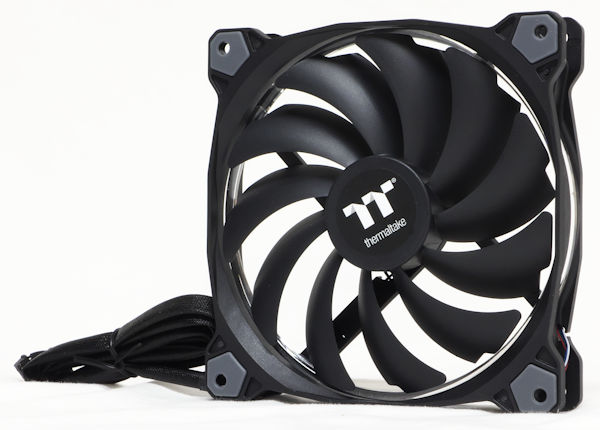 Thermaltake was founded in Taiwan in 1999. It also founded its California office in that year. Thermaltake (abbreviated Tt) sells cases, heatsinks, radiators and a huge array of water cooling equipment (colored cooling fluid do it for you?), PSU’s, cases, see-through cases, keyboards, mice, headphones, chairs (!), apparel – and fans. Lots of fans.

They even have a company brochure (doubtless aimed at new employees) that outlines their core values. Based on their website alone, one would expect that this company is globally large.

The Riing 14 LED RGB TT Premium three-fan kit is very interesting. On the web page for the kit, Thermaltake lists the features and specifications of the fans and the kit in general:

To add to the support Thermaltake provides, they have this link to a video on how to use their software.

There are twelve languages on the Thermaltake Riing 14 RGB Premium fan kit box. The front of the box has a large window where you can see one of the fans. It tells you what it can do and on the side it lists specifications.

The back of the box tells you all about how the software can control up to 48 fans. It has a picture of the software in action, along with some basic instructions on how to use it.

Inside there are three fans. Each fan has a special plug that goes into the hub. There are no other connections, so the fans cannot work without a bespoke hub. The hub connects to the motherboard through a USB2 connection. One end plugs into the motherboard. The other end is a mini-connector on the hub. To extend control to other hubs, you use the connecting cable located to the left of the stack of fans.

The fans can be fastened down in two ways. For cases we have standard fan screws – there are four of them in each little bag (yes sir, three bags full). Further each of the three bags has four 30 mm M3 screws for attaching the fans to radiators. At the lower left we have an independent connection to the power supply. I will mention that a couple of Velcro patches are included, obviously to mount the fan hubs at some place in your case.

Do you see those bundled cables sticking out of those fans? They are bulky because they are almost three feet long – each – and fully sleeved from one end to the other.

The hub looks kind of small there, among the small parts and accessories. Well, physically it is small, but this is a very important part of your kit. Here is the top, where you can see the USB2 and the power socket. The third socket is for the cable that links this hub to the next one (remember, you can have up to 16 hubs).

The next picture shows you the bank of DIP switches that tell the software which hub this is, from one to sixteen. The picture also shows you where the three fans plug into the hub.

Finally, we look at the fans themselves. In the left picture we have a view from the intake side. Note the eleven blades. Note too how the ends of the blade are shaped: one corner looks cut out. What you can’t really see in the picture is the ring shaped LED in the middle of the frame. The LED ring is what the blade tips are avoiding with the cut outs at their ends.

The exhaust side is where the label is. That label tells us we have a TT-1425 fan. The ODM (Thermaltake is the OEM) is Hong Sheng. The model number is listed as A1425L 12S. In both the exhaust and the intake pictures you can see the vibration-absorbing pads surrounding the screw holes at the corners.

Finally, note the plug. It is unique and fits only into a dedicated controller. 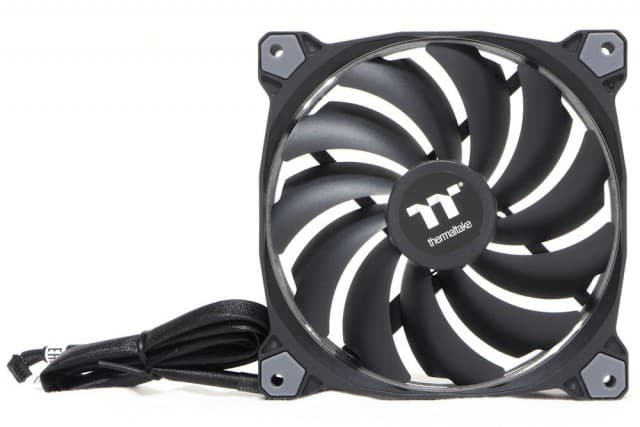 First the fans were placed in a test stand, where their free air RPM was observed and their noise was assessed. The standard proxy for what you can hear is the Sound Pressure Level (SPL), measured in decibels and given a type A weighting (dBA). A silent room is about 30 dBA.

The ambient noise for this set of testing is 31 dBA. To measure noise levels that were softer, the Sound Pressure Level (SPL) was measured 10 cm from each fan. SPL was adjusted to 1 meter by subtracting 20 dB. The sound pressure meter is a Tenma 72-942. This fan tester has a microphone which is not accurate under 30 dBA. That means an adjusted measurement of 10 – 15 dBA is not accurate; the fan could easily be quieter than that. But this is the limit of all but the most expensive SPL meters.

Next the airflow was assessed using a standard measure, cubic feet per minute, or CFM. The air entered a sealed 8″x8″x8″ box (200 mm on a side) where it was allowed to mix. The air left the box through an exhaust port, where it was measured with the vane head of an Extech AN100 anemometer, averaging 10 readings per fan setting. Depending on the test, the fan was measured without obstruction, pulled through a standard metal mesh dust filter, or pushed through a 30 FPI Koolance Radiator, 1x140mm Copper (High Flow).

At idle in Quiet mode, the Thermaltake fans averaged 601 RPM in free air. The SPL was an unadjusted 32 dBA, which was next to silent since the ambient was 31 dBA. The adjusted SPL was 12 dBA.

The fans ran up their speed as the work done by the CPU was ramped up. So they track the PWM signal sent by the motherboard to cool the CPU. They did not respond to the motherboard calibration signal, however. Why? I don’t know. Should be the same signal, right? But it wasn’t. The controller could somehow tell between real and fake. If you know, please say so in the comment section.

For the tests below, the fans were put in Performance (unfettered speed) mode and tested. As case fans they were strong performers among the field of contenders. They average 1328 RPM. Compare them with other fans that ran around 1300 RPM. The middle column has the data that is the most interesting. 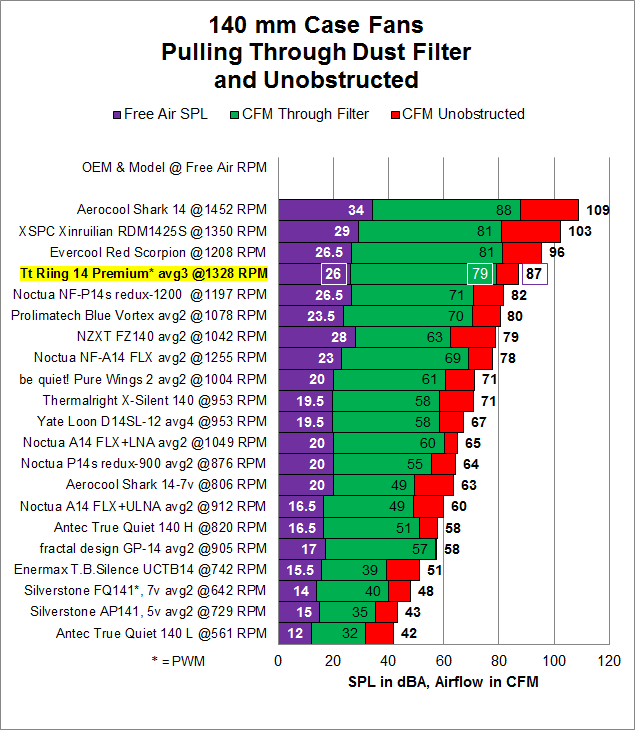 You could hear only air passing through those fans.

Pushing through the 30 FPI radiator, we assured these fans were meeting the most stringent of challenges. Compared with other fans that pushed 49 CFM through that rad, the Thermaltake fans matched their competitors — competitors representing the top 140 mm square framed PWM fans. 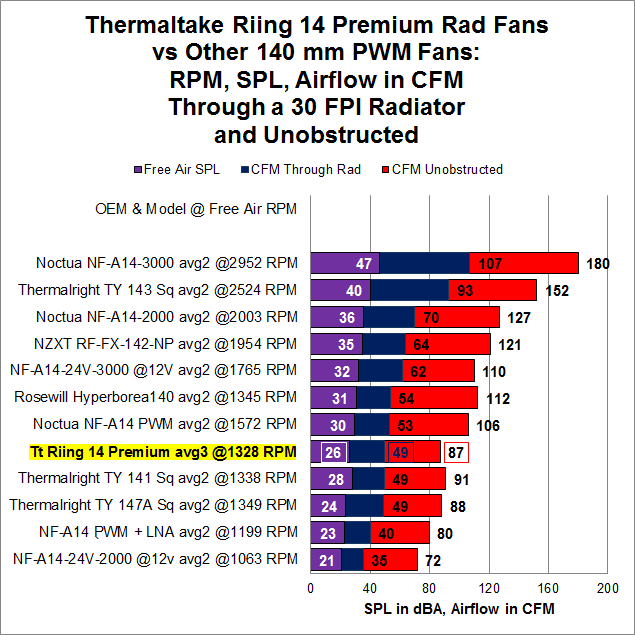 In this picture we have a screenshot. The software window top row shows the number of the fan controller, followed by the five profiles. The currently operating profile is marked with a darker color. The second row that contains Tab . . . Save shows the profile you just saved. It does not show the currently operating profile. That is in the top row.

The next picture shows the three fans merrily spinning along. Notice that the colors on the fans match the colors of the software circles? This was done so I can report to you that the speed and the colors of each fan can be controlled individually.

And if you click on that star in the upper right hand corner, you get your choice of languages. 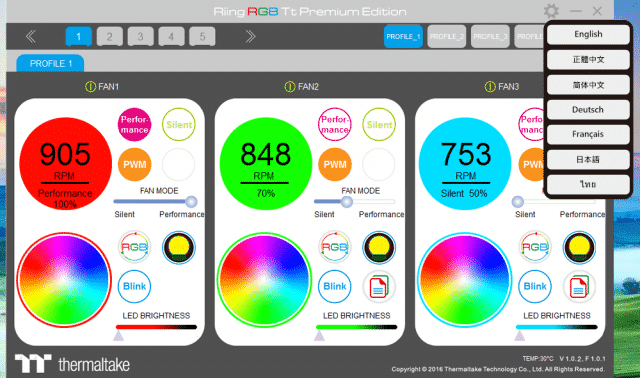 Here are a couple of photos showing the Thermaltake fans in different colors. This confirms what the software and the fans can do in making colors. the color changes are kind of addicting.

These are fun fans to play with. The fact that these fans are controlled with software means there is no dongle hanging out of the case; nor do you hijack a case control to help control fans. The symbology is straightforward and intuitive. Even better: when the time comes to improve the software they can post it and we can download it. We are already up to version 1.02, and the next version is due soon. The website tells you in some detail how to use their software; because it is a website it can be improved if needed.

That the controllers respond to the computer’s main PWM signal means you can set them to respond to your overclock and how much work your CPU is doing. You can set the individual fans to respond to your system’s PWM. Alternatively you can take the fans off PWM control and set their speeds as you see fit. That can turn them into fixed speed case fans. Your choice.

Having a spectrum palette available means you not only can choose what color to use, but you can choose them in relation to the whole color palette. Or you can choose to have the fans automatically cycle across the color spectrum. Or you can turn the LED’s off. Again, your choice. The color and the speed of the fans are controlled separately. When the fans are set to PWM mode, they seem to control themselves. We are used to watching the LED intensity vary with how much juice we give our fans. Here the LED’s are unaffected by the speed control. They go shining right on through.

Finally, the fans succeed at being fans. I put them up against tough competition and they came sailing through with the sound of wind through the trees. The engineering decision to go with eleven blades on the impeller was an inspired choice. It resulted in a fan with a silky smooth sound. 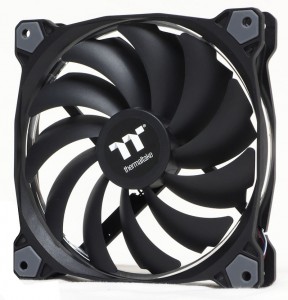 So far, these seem only to be available online directly from Thermaltake.

Talk about an embarrassment of riches! In short order, Noctua banged out a bunch of PWM fans at the end of 2011. I thought you’d like to look at three of them and see how they perform.

Not all cases have room for a full tower heatsink. So, Noctua provides a blow-down variety with six heat pipes and a 140 mm fan. That was the NH-C14, and it is quite a cooler. So, what’s new? The NH-C14S (note the change in the model number), with the finstack moved over to make room for cards in the top PCIE slot. How well does this heatsink cool? Let’s find out.

These would look crazy in a over the top WC build . Love your reviews