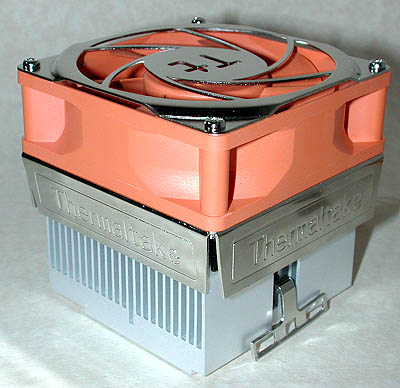 The good guys at Thermaltake were nice enough to send a sample of their latest heatsink, the Thermaltake Volcano 9.

It ships with a load of parts: 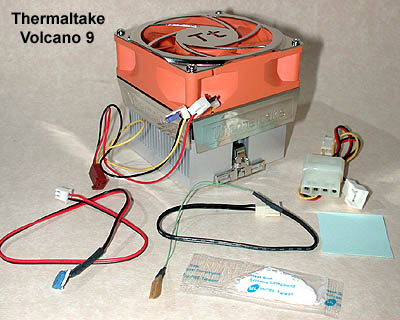 At full bore, the fan consumes 8.4 watts, so the four pin adapter is essential. The fan has a separate tachometer output so you can plug it into the motherboard’s fan header to monitor rpms. You have the option to vary rpms by temperature or manually adjust rpms with the potentiometer’s dial – both allow settings from 1300 to 4800 rpms.

One thing not mentioned in the packaging (although it is on the website): In order to activate temperature or potentiometer control, you MUST remove the blue jumper on the fan’s thermistor cable pin.

I measured its noise, 5347 rpm, at 70 dBA with a Radio Shack sound meter 8″ from the fan’s intake, a little louder than a Delta 38 (about 69 dBA). It’s not safe to use a motherboard fan header, and Thermaltake provides an four pin adapter cable. 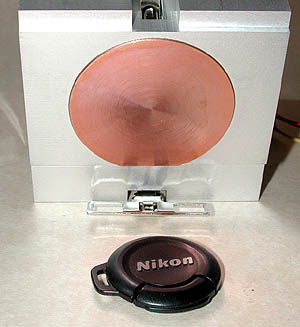 features a copper core surrounded by aluminum fins. The copper core is slightly above the aluminum base, which is not a problem as the core is large enough to contact any CPU. The base is flat but not polished.

Some think that a copper core/aluminum fin arrangement is a superior combination due to each metals’s thermal characteristics. Bunk. It’s lighter and cheaper – that’s it. The fins

are typical aluminum extrusion – nothing out of the ordinary.

The clip engages all three lugs, so mounting is very secure. However, it does require a screwdriver to mount, so the screwdriver-challenged should take note.

In summary, a fairly conventional aluminum extrusion/copper core heatsink with a very secure clip and a 3 way fan.

The Volcano 9 was first tested on the CPU Die Simulator which gives results that are unaffected by motherboard influences. I then tested it on an Iwill KK266+, modified to read AMD’s on-die diode, as an example of what users might see on their systems.

In addition, with an adapter I tested it on a Lucky Star P4A845D with a modified P4 1500 to read CPU case temps. The copper core covered about 95% of the CPU case top.

Die Simulator results place the Volcano 9, at its highest rpms for Socket A cooling, in the mid rank of heatsinks (Heatsink Ranking). At a more noise tolerable 2617 rpm, the Volcano 9 falls into the lower ranks of heatsinks tested.

For P4 cooling, the Volcano 9 ranked lowest of those tested; the thermistor was placed against the CPU’s side, and the fan ran at 3336 rpm while running Prime 95. At idle, the fan ran at 2162 rpm – very quiet.

To test the thermistor, I taped it to the side of the Palomino’s core. Thermaltake shows the thermistor taped to the backside of the CPU, with the thin blue wires resting between the socket and the CPU. Because of the thermistor’s length, the tip will not contact the back center of the CPU¹, where the temps are the hottest. I decided to use the CPU side instead. 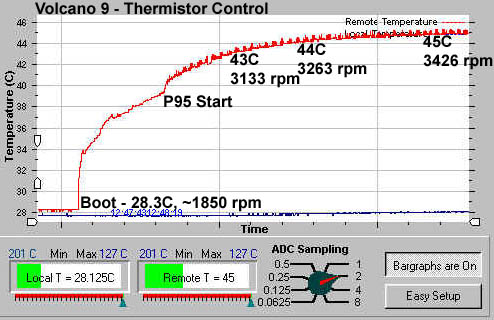 The Volcano topped out at 46C, 3533 rpm, running Prime 95. I then let it run at Idle until temps stabilized. After about 30 minutes, the CPU powered down into a “sleep” state: 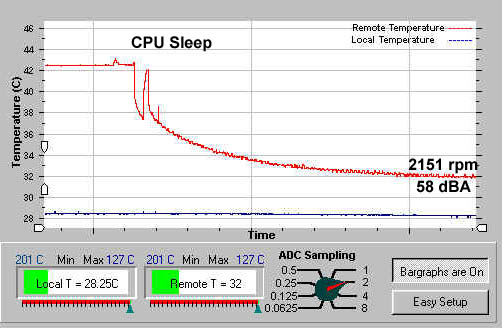 The Volcano 9 hit its lowest rpms at this point – about 2151 rpm. I then woke it up by running a Quake Demo: 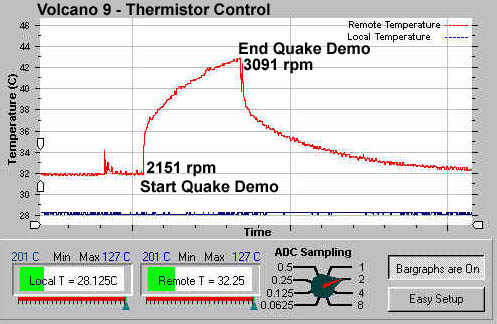 Note the rapid rise in temps – the thermistor lagged somewhat, but reached 3091 rpm at the peak – don’t expect response to be instantaneous. However, at idle it’s quiet and probably OK if you want to sleep.

For Socket A cooling, the Volcano 9 is an OK performer; for P4 (not designed for it), it ranks at the bottom.

Overall, an interesting blend of performance options and noise control.

If you purchase this heatsink or fan, I would be very interested in your opinions.

The Volcano 9 is available from The Heatsink Factory. Thanks again to Thermaltake for sending this our way.

¹You could bend the probe into a “U” shape and contact the back, but on some CPUs, there are components on the back which interfere with contact.

The latest heatsink from Thermal Transtech (aka nPower) features the largest heatpipe I’ve ever seen for CPU cooling.

UPDATE 6/24/00 In our 6/18 review of Tidal Pool’s innovative waterblocks, we found great performance for an aluminum block due to its superior design. This block used straight 1/4″ nipples which are not usually amenable to socket 370 mounting. Ed