News Ticker
See Page 2 for a look inside…

SUMMARY: A very clever design resulting in good performance in a small package; don’t even think about using it for high heat CPUs unless the fan delivers more than 30 cfm, however.

A number of folks asked me to review the ThermoEngine, so I emailed Thermosonic and they were nice enough to send out a sample to review. There is a lot of “buzz” about this heatsink, probably due to its innovative design and appearance. As you can see from the pic below, 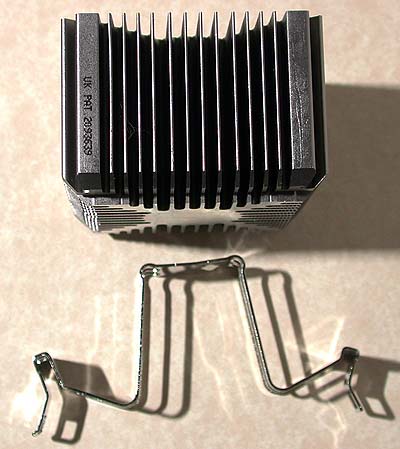 the ThermoEngine is unlike other heatsinks around. It is built around a center core (apparently filled with wax) with fins radiating out from it; in addition, air flows unimpeded down through the fins and exits through the bottom and sides, as you can see from this top view 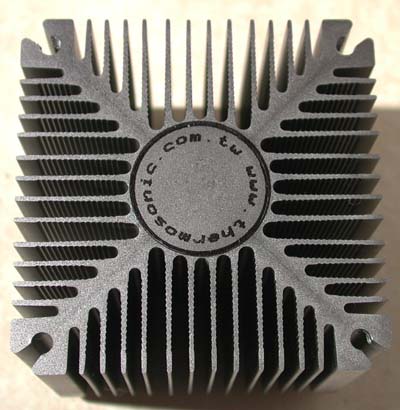 and this bottom view. Note that the fins are ribbed to increase surface area. 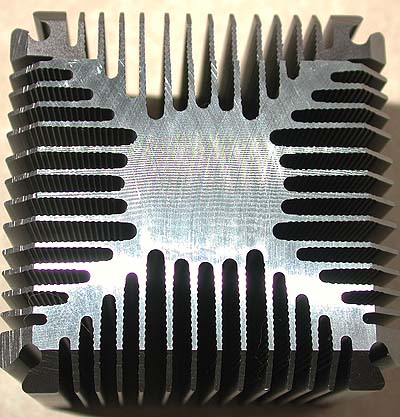 The center core absorbs heat and the fins radiate the heat away from the core. Rather than have a dead spot under the fan’s motor core, all the cooling air is directed to the fins where it does the most good. In addition, cooling air exits from the bottom and further serves to cool the CPU’s package.

I think this is quite clever; by dumping cooling air onto the CPU’s carrier, lower temps are recorded by the motherboard’s socket thermistor compared to other heatsinks. We have shown repeatedly that socket thermistors are misleading when it comes to actual CPU temps, so how this effects actual cooling performance will be interesting.

Close inspection of the base revealed that it is not particularly well finished, as shown below: 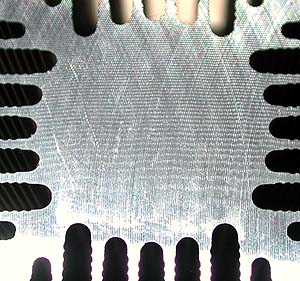 If you drag your fingernail over the base, you can feel the machining marks – not good for optimal heat transfer from the CPU core. The ThermoEngine ships with a gummy heat pad which, thankfully, peels right off; it was not used in any testing.

In addition, I also found that the CPU does not hit the heatsink’s center, and in fact is significantly off center, as shown below: 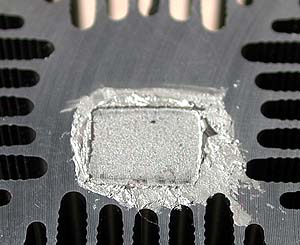 When I first examined the heatsink’s clip, I noticed an offset dimple on its center arm; turns out the dimple lines up exactly where the heatsink is positioned on its base (I’m guessing it’s like a pressure point). This offset must have some impact on performance, as it’s “unbalanced” relative to the heat source.

The ThermoEngine ships with a 60 x 10mm, 16.3 cfm fan; this fan results in a C/W (per Thermosonic) of 0.56 – not something I would used for serious AMD cooling. Any heatsink with a C/W greater than 0.3 will not deliver top notch cooling, so I did not test the ThermoEngine with this fan.

The clip is not too bad – you can actually use only your fingers to get it on the socket. Getting it off requires a screwdriver; thankfully, Thermosonic supplies detailed instructions of how to get it on and off (English and Chinese).

I would be careful mounting it – they recommend tipping the heatsink to engage the rear clip; if you’re not gentle, you might chip the CPU’s core. Also, on the ABIT KT7, the capacitors close to the socket will limit how far you can tip it back, so you may have to “work it” a little.

I prepared the ThermoEngine by boring a hole through the side of the base so I could epoxy a thermocouple above the CPU. The thermocouple is attached to an Omega HH23 Digital Thermometer. Ambient temps were measured with a thermocouple placed about 1 inch from the fan’s intake. I used Prime 95 to stress the CPU on an ABIT KT7, running a Duron 800 @ 1000 (52.6 watts). The Duron is actually a more severe test as its area is less than the T-Bird, so there is a higher watt loading by area. Arctic Silver grease was used in all tests. 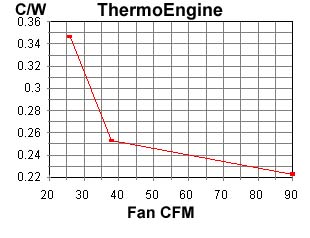 As the graph shows, a fan speed of about 32 cfm is needed to get a C/W of 0.3; a Papst 33 cfm would be a nice compromise between noise and performance. If you extend the graph out for a 16 cfm fan, looks like you would probably hit Thermosonic’s spec C/W of 0.56. Anything beyond the Delta @ 38 cfm is not going to give you a lot of performance gain considering the performance slope and probable noise levels.

The ThermoEngine needs something like a Papst 33 or Delta 38 to hit performance levels to make it competitive with the current crop of high performance heatsinks. Considering its size, it does pack a good punch. It will fit any Socket A motherboard without any clearance problems.

Thanks again to Thermosonic for sending a sample our way; an interesting heatsink!

See Page 2 for a look inside…

See Page 3 for the ultimate answer…

SUMMARY: In a word: Nothing.

The ThermoEngine has generated some buzz concerning what’s inside that makes it “work”. I’ve seen reports about it being a heatpipe to filled with wax. Now, I hold on to heatsinks so I can always retest if needed for a comparison, so I was reluctant to hack it.

Thankfully, Hans at Microplex Norge AS provided me with a second sample so I could deconstruct the first one.

On the top is a disc that can be pried off. I used a Dremel cutter to mill a groove into this cap so I could pry it off; result shown below: 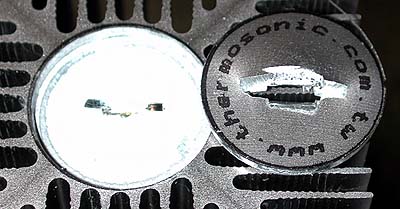 Under the cap is what looks like another brighter aluminum cap. I then proceeded to drill a series of small holes, as shown below: 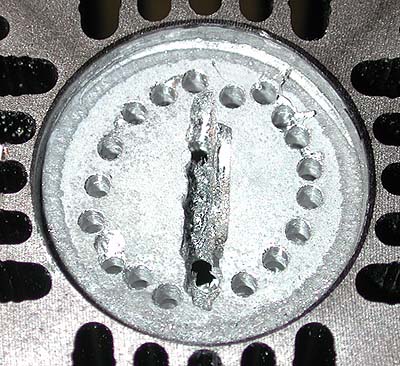 I first drilled into the center and found that it’s only about four millimeters thick and hollow in the center. Nothing oozed out of these holes. Then I proceeded to drill a series of holes around the edge, figuring I could connect them up and get this second cap off, which I did, as seen below: 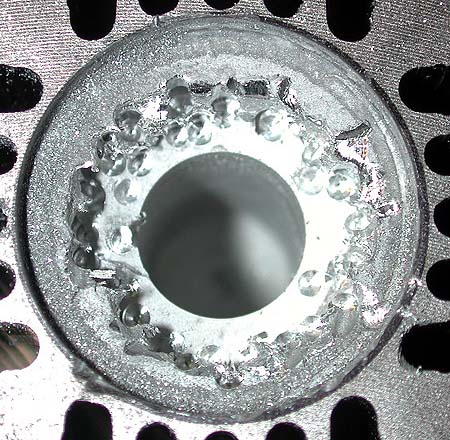 Peering inside, I could see that there was nothing in the cavity; no wax, no stains, no heatpipe, no wick, no water – nothing. It’s a hole bored into the middle of the heatsink; 9mm wide, 25mm deep. The heatsink measures 42mm overall depth, with the core about 23mm wide.

I thought maybe the core is a different alloy and then cut the ThermoEngine in half to see if I could find a line between two metals, as shown below: 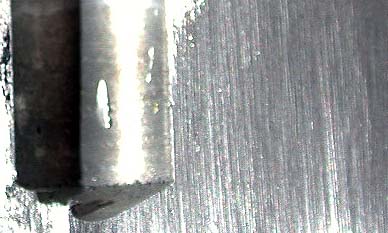 Nothing – no line. Now I can’t say definitively that the core is not a different alloy, but from what I can see, looks like the same metal as the rest of the heatsink.

I’m not a metallurgist, nor do I know the intricacies of how different metals might be bonded together. However, considering what I found, the secret of the ThermoEngine is:

Well actually, there is something: Good marketing hype.

Thanks again to Hans at Microplex Norge AS for enabling me to discover ThermoEngine’s secret.

See Page 3 for the ultimate answer…

Summary: Drilling a 1/16″ hole in the top results in no performance change.

After receiving a number of emails suggesting that there was a gas or small amount of fluid that evaporated on opening the ThermoEngine, I decided the only definitive test was to do a “before and after” test that involved drilling a small hole in its top. 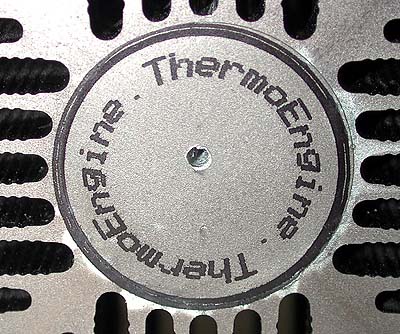 The 1/16″ hole I drilled after the first test run.

I think it shows consclusively that there is nothing in the cavity that impacts cooling performance. This does not mean that the ThermoEngine is a bad heatsink – in fact, it is quite a good performer. I think the hollow core is there to reduce the thermal mass to be cooled by the fins – a guess on my part.

See page 4 for the “new” ThermoEngine…

The latest ThermoEngine has no hollow core; testing reveals it performs slightly worse than the hollow core.

Nevin over at Arctic Silver was mind enough to send me a “new” ThermoEngine to test. He bought a few, sawed one in half and found this:

I prepared the ThermoEngine by boring a hole through the side of the base, then drilling up to this hole through the base’s bottom, so I could epoxy a thermocouple above the CPU. The thermocouple is attached to an Omega HH23 Digital Thermometer. Ambient temps were measured with a thermocouple placed about 1 inch from the fan’s intake. I used Prime 95 to stress the CPU on an on an Iwill KK266 with a T-Bird 1133 @ 1397, 1.85 volts (86.8 watts – direct calculation). Arctic Silver grease was used in all tests.

I also tested the ThermoEngine insulated from the body of the static tester (54.5 watts) and one test un-insulated, which is how it’s mounted on your CPU. To insulate the heatsink from the tester’s base, I fitted a piece of thin carboard between the simulated die and the heatsink’s base. The difference accounted for 0.03 C/W of its performance.

Based on this test, it looks like the solid core ThermoEngine is about 0.02 C/W worse than the hollow core model; this is not an overwhelming difference and corresponds closely to what FrostyTech found in their test. Some reviewers are finding it performs about the same as the hollow core, although their test methods may not be as rigorous as ours and FrostyTech’s.

The solid core ThermoEngine is a good heatsink but marginally worse than the hollow core model. For all practical purposes, I don’t think you will see much of a difference between the two.

A basic primer on some aspects of watercooling physics. — Mike Larsen