SUMMARY: A new version of Arctic Silver, and it’s sibling.

The good guys at Arctic Silver
recently sent me these items to take a look at:

You know it’s going to be a good day when this arrives in the mail. 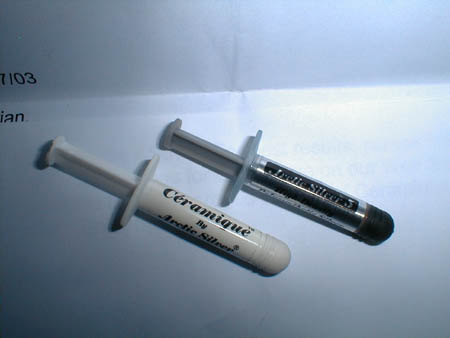 I’ve had a chance now to run both of these in my “main/gaming” rig, and can draw some conclusions on these thermal compounds.

Somehow, in my travels and wanderings through computerdom,
I manage to “skip generations” along the way… I went straight from Win95 to WinME to WinXP, I got Unreal Tournament and UT2003, but neither Unreal or Unreal II, I skipped every other release of
Sierra’s NASCAR franchise…you get the idea.

I (way back when) got a tube of the original Arctic Silver, on the advice of a lot of members in the Overclockers Forums. AS2 came and went before I even needed another tube of thermal compound,
and then I got the newer (at the time) AS3.

Arctic Silver did the “skipping” for me this time, by going straight to AS-5…. I’ve read around the internet their reasoning for skipping “AS4”, and the reasons I read were marketing.
They also (from Arctic Silver’s standpoint) seemed like very good ones. But I digress… What sits before me is Arctic Silver 5, and it’s sibling Arctic Silver Ceramique. Let’s look at those
and leave the marketing strategies to those better suited to discuss them. 😉

While I could copy verbatim the technical specs of this new compound, it’d be just as easy to hit the highlights, and link to Arctic Silver’s page.
The major items of interest are (quoted from Arctic Silver’s website):

I can only speak for myself when I say this, but the “coverage” numbers quoted seem low…. Perhaps I just don’t waste much, but I seem to get a lot more “CPU’s per tube” than they quote. At least I did with the original AS and AS3.
This is one of those “Your Milage May Vary” type of things… I guess I get “good milage”. =)

HOW WELL DOES IT WORK??

Two things I noticed right away when I went to apply AS-5 for the first time, is it appears darker, and thicker than it’s predecessors. The content of the “suspension fluid” the silver particles are carried in changed with the new version,
and I assume this would be why it appears this way. It’s a bit more difficult to “spread” on the CPU core, due to this increase in viscosity.

Once it was on, and had opportunity to “settle in”, I did notice a slight reduction in CPU temperatures, probably between 2 to 3 degrees celsius, versus the previous version (AS3).

Another thing I read is that it’s recommended to store your tube (capped, of course) with the tip pointing down. This is mentioned at the end of the “Installation Instructions” page at Arctic Silver’s website. This is to lessen the separation of the particles in the tube
while in storage. They also mention refrigeration helps preserve the compound further from this particle separation.

Next up, let’s look at Arctic Silver’s Ceramique…. 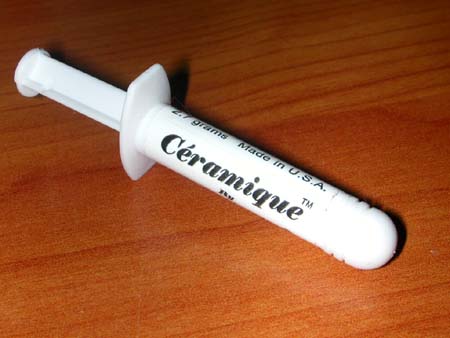 The highlights of this compound (also taken from Arctic Silver’s site):

An excellent choice for P4 cooling, although noise preferences must be considered – Joe