I’ve been using the latest version of Windows 7 Ultimate as if it were my OS.

Many of our readers may be thinking of doing the same. However, let’s be clear about what this release is:

Microsoft has stated that when the year trial period ends, you CAN NOT upgrade this version to a “clean” OS – you must do a clean install of a final version of Windows 7. This means that you must reinstall any software, drivers, etc that you used in this evaluation copy all over again. So be warned – this is not a long-term OS. In addition, Microsoft stated that at the end of the eval period, this copy will shut off after two hours.

Windows 7, according to some, does perfrom marginally better than Vista; I don’t have Vista so I can’t affirm this one way or another, but I do believe Microsoft has tweaked W7 for performance and the “Son of Vista” is marginally better than its parent – see  Windows 7 – Not Much Faster Than Vista for a comparison.

As to XP – so much has been written on this and the results are fairly conclusive – XP remains a viable OS compared to Windows 7. The issue XP users face is that Microsoft will continue to issue security patches until 2014, but will not issue any upgrades to XP – what you see is what you’ll have for some time, which for many users may be OK.

After using this version for a variety of tasks, I can attest that it still has a few bugs. For example, one thing I found is that if I have streaming audio playing over the web, when I open another program, the audio stutters, as if it’s in a loop. Once the program opens, the stuttering stops.

I also found that when I dragged a file into a folder, then added another file, the first file popped up on the desktop. Maybe this is because I’m not totally familiar with the subtleties of this version’s drag and drop, but I kind of doubt it.

It just affirms that this version is close to final but not final, so be warned.

I found Windows 7 to be visually quite nice – especially some of the Screen Savers which I find visually stunning (I copied the images over to Ubuntu). One of the biggest differences I think users will see is that Windows Explorer is gone; in its place is something that looks like what I use in Ubuntu – more browser-like than anything else: 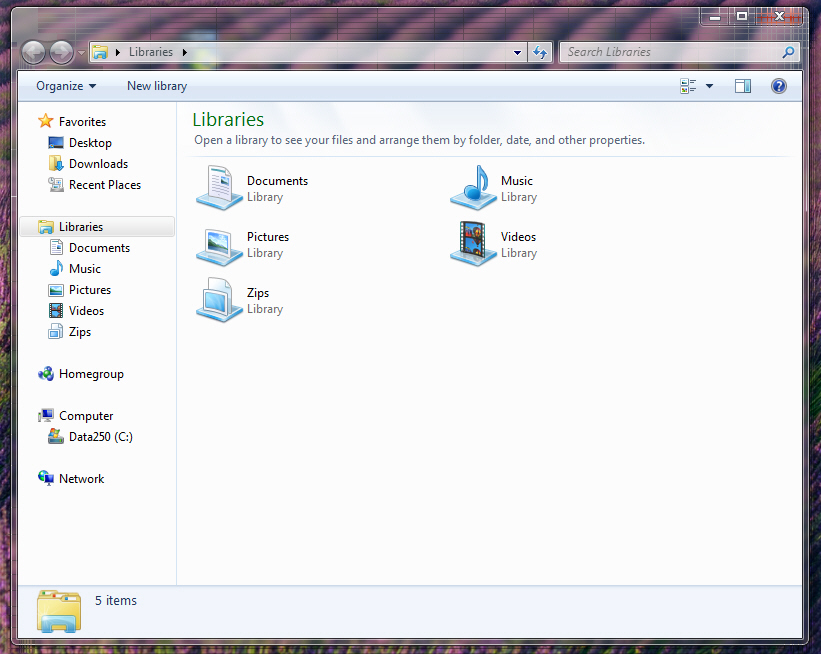 Now folders are organized in “libraries” – note that as in a browser, you use the arrow button to move through data: 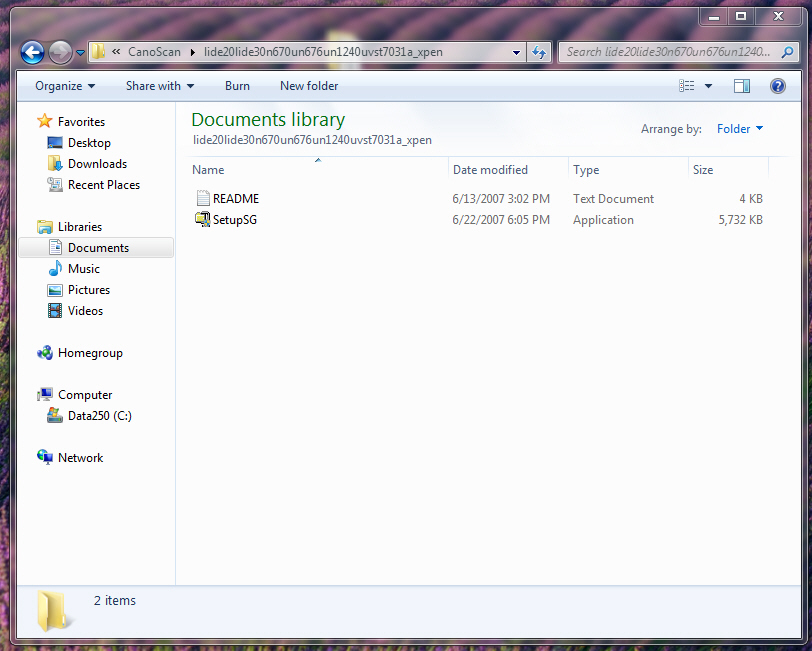 Control Panel does a bit more than what you get in XP – one example: 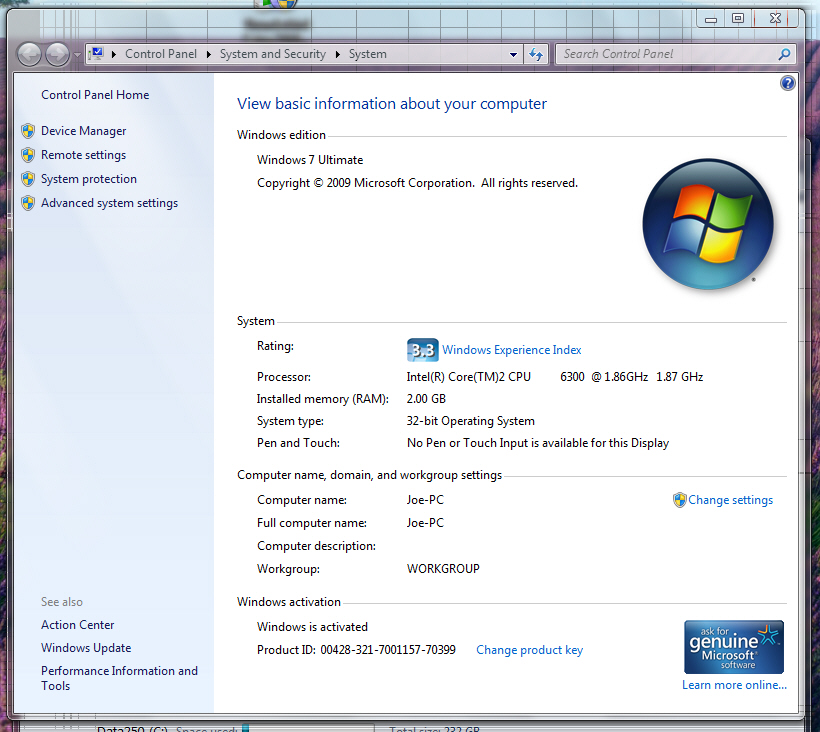 Interesting to see the “Windows Experience Index” – this ranges from 1 – 7 and gives users an idea of what effects will work, such as Aero. This rating is for a stock Dell Vostro 200 box.

One feature I like very much is the way Windows 7 handles the left side of the task bar – When you mouse over the image, if there are items open you see a thumbnail of each item; clicking on any thumbnail opens it up (I could not get a screen capture):

Windows 7 is supposed to find devices and load drivers when first booting up. It did find drivers for sound, the Realtek ethernet port and my Epson printer; it did not find drivers for my Canon scanner – this I had to do manually. Also the printer driver was bare-bones; to get the ink montitor and detailed printer settings, I had to download drivers from Epson.

In this respect it is similar to Ubuntu, although Ubuntu found all my devices and they worked right away. However, there are no Linux drivers for my printer or scanner, so they lack apps such as for the ink monitor and Canon Toolbox. It is a Windows world.

I loaded legacy software without any problems, so on that score I found no issues; however, this is only my experience and others may find problems; if you had problems under Vista, Windows 7 may not be any different.

There is no doubt in my mind that Windows 7, when it’s finally released, will be a very good OS for Windows apps. Microsoft has stated that there is no upgrade path from XP to Windows 7, so you must reinstall all your legacy apps; whether this all plays nicely with devices you have now is a bit of an uknown.

If looks are important, W7 will not disappoint – it really is nicely done. You also get all kinds of eye-candy if you have the horsepower to pull it off. W7 was developed with the expectation of ever-more CPU and RAM and this is apparent. Its footprint is much larger than XP by almost four times, so there’s a LOT of code in this version.

In terms of sheer performance, XP is holding its own against W7 and this is old news. You can upgrade XP with eye-candy if that’s important to you such that it looks like W7. However, even though Microsoft will continue to release security upgrades to XP until 2014, what you have now is what you’ll have through 2014 – there will not be any OS upgrades.

If you hang on with XP, the liklihood that Ubuntu will emerge as a real Windows alternative (IMHO) in the next 2-3 years is quite high. This, coupled with the “cloud”, may make the OS less an issue than it is today. It is not out of the box to think that the next Windows OS could be much more browser-centric than what we see now with W7.

Personally, I will stick with XP for at least the next year – as appealing as W7 is, frankly the performance difference between XP and 7 does not justify the expense. I use Ubuntu for about 90% of what I need (particularly for secure financial apps over the web) and XP for things that Linux does not do as well – Winamp is one example.

I encourage readers to mount W7 on a spare drive and give it a test drive – I’d be interested in your impressions.

Some additional views on Windows 7:

Windows 7 – Best Left to the Pros?

Will Work For Windows 7?


Windows 7 – Worth The Effort?