Today we get an opportunity to look at another M.2 NVMe-based SSD in the XPG Spectrix S40G RGB. The Spectrix series of drives are different than most with XPG adding controllable RGB LEDs to accommodate today’s trend. The modules are spec’d to reach speeds up to 3500 MB/s sequential reads and 3000 MB/s on writes, which on paper, places it up there with other enthusiast level drives.

These are impressive numbers and should be a winning combination of looks and performance at a remarkable price point. We’ll be putting the drive through our testing suite and will soon know if the paper specs match up with actual results. Read on to see how the XPG Spextrix S40G RGB compares to similarly rated drives.

This is a new drive from XPG, which uses the latest Realtek RTS5762 controller and pairs it with Micron 3D TLC NAND. It was difficult to find specifics on which NAND from Micron this drive will use, but from what we gathered, it could be 64 or 96-layer depending on availability.

The XPG Spectrix S40G drives all come in a 2280 size and uses both sides of the PCB depending on the capacity. The 1 TB model we have here has storage modules and a NANYA DRAM module (128 MB total through a 1Gb IC) on one side, while the other side of the drive has the controller and storage modules.

In addition to the new internals, the Spectrix S40G is sporting a new heatsink with integrated RGB LED lighting that is compatible with RGB lighting control apps from the major motherboard manufacturers. The heatsink can not be removed without voiding the manufacturer’s warranty, but that kind of defeats the purpose of having the RGB LED in the first place.

On the software side of things, the XPG Spectrix S40G supports Low-Density Parity Check (LDPC) error-correcting technology, which XPG says can detect and fix a more extensive range of data errors for more accurate data transfers and a longer SSD lifespan. In addition, the S40G supports AES 256-bit encryption to ensure data security and integrity. 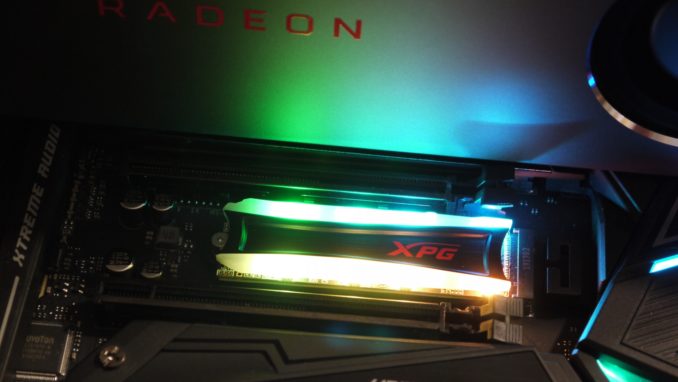 As you can see in the system picture above the RGB LED lighting is quite bright. This was taken on the MSI MEG X570 which has its own heatsinks but the XPG Spectrix S40G RGB looks much better.

From the slideshow above, users can see the packaging for the S40G has a picture of the Spectrix S40G front and center with the model name and some details such as capacity and interface around the edges. Opening the flap at the side, we can slide the plastic container out, which holds the drive tightly, keeping it secure for shipping. 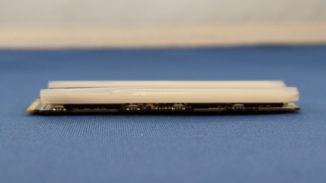 Our first look at the drive shows its heat spreader attached and looking good hiding the ICs. After flipping it over, exposes a DRAM cache chip and, hidden under the label, more ADATA storage modules. Removing the heatsink revealed the Realtek controller and additional ADATA labeled storage ICs. 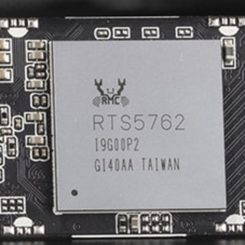 The pictures above are close-ups of the Realtek RTS5762 controller, ADATA labeled 3D TLC NAND, as well as the NANYA DDR3L DRAM Cache IC, which is only 128 MB in capacity.

XPG also includes access to free software, which will optimize and show the status of the drive in the system. This software comes from its parent company in the form of ADATA’s SSD ToolBox. They also offer access to Acronis True Image HD to image your current drive making a swap-out nearly painless. You will find the XPG RGB control software at the previous link in the download section.

The SSD Toolbox is a complete utility used to monitor as well as optimize the drive. The software runs diagnostics (both a quick and ‘full’ diagnostic), sets temperature and capacity alerts, has Secure Erase capabilities, as well as system optimizations, which include adjusting settings for Superfetch, Prefetch, and automatic defragmentation abilities. Overall it keeps an eye on the drive and will help set up your operating system for peak performance with the drive. In my limited use with the software, it worked as described. We have also included a screenshot of the XPG RGB lighting utility and ASUS Aura software in the above slideshow as you can see the Aura utility recognized the drive and controlled the lighting easily.

We install the drive as a secondary device on the test system and run the listed benchmarks against it. While typically many will use these drives as system drives, the test machines can be different as well as people’s OS implementation in the first place, so we try to isolate as many variables as possible in an effort to have the results as repeatable as possible with any reviewer who may test drives.

For this review, we also tested the XPG Spectrix S40G on the new AMD X570 platform, which utilizes PCIe 4.0 to see if the more modern protocol would show any limitations placed on the controller because of PCIe 3.0 transfer speeds. This will also show differences in platform storage capabilities.

A special thanks go out to EVGA for providing the CLC 240 CPU Cooler and 750W G3 Power Supply to cool and power the system, G.Skill for the Trident Z DRAM, and Toshiba OCZ for the 480GB TR200 SSDs storage running the OS, benchmarks, and games. With our partners helping out, we can build matching test systems to mitigate any differences found between using different hardware. This allows for multiple reviewers in different locations to use the same test system and compare results between reviewers minimizing system variance. 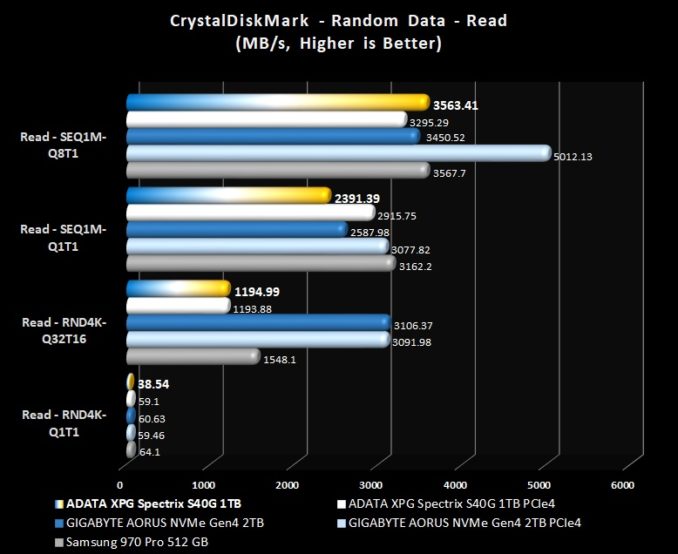 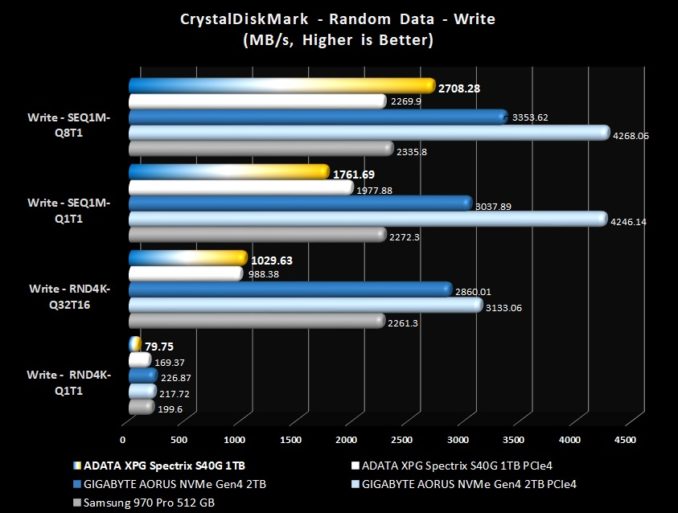 In our first test, Crystal Disk Mark (CDM) reads, the S40G performed well in the first sequential read test, hitting its rated speed with 3563 MB/s but drops back down to the low end of the pack results with lower queue depths. 4K reads are about half the rate of the other drives, but keep in mind they’re much more expensive than the XPG Spectrix S40G.

On the writes side of CDM, again, we see solid performance in the first sequential test coming in at 2708 MB/s, which is still a bit shy of its rated write speeds but besting the Samsung 970 Pro which is twice the price. It is interesting that the PCIe 4.0 protocol gives the S40G a boost in the lower queue depths for both the read and write tests and more than doubles the random 4K writes. 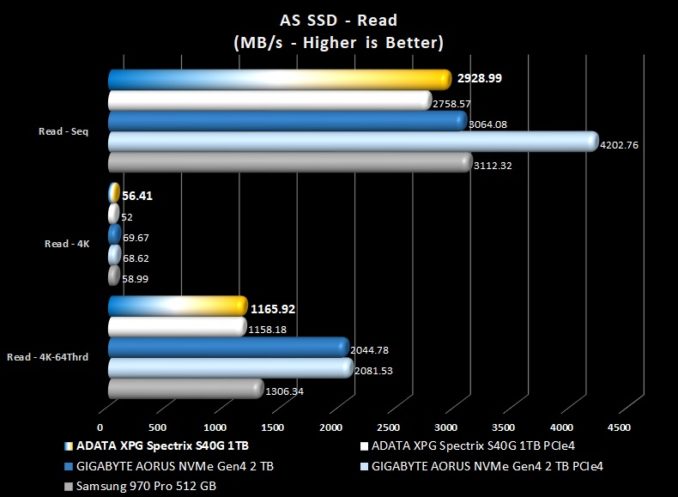 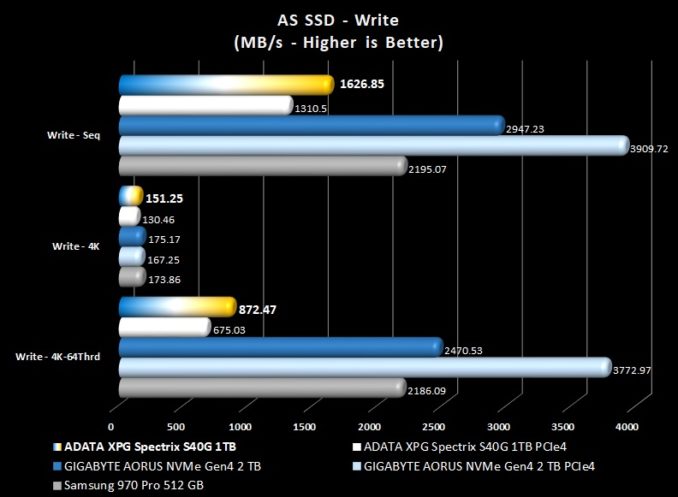 In AS SSD, the S40G shined in the sequential read test. It also did well in the single thread 4K read and write tests. While sequential throughput is important, the vast majority of files are much smaller, so 4K performance is an essential metric on how well the drives perform daily. When comparing to the other much more expensive drives, we can see the difference that having a large DRAM buffer can make. The Samsung and Gigabyte drives with 2 GB DDR3 and 1 GB DDR4 respectively had a definite advantage. Still, the Gigabyte PCIe 4.0 drive seems to have done exceptionally well on both platforms leveraging the faster controller. 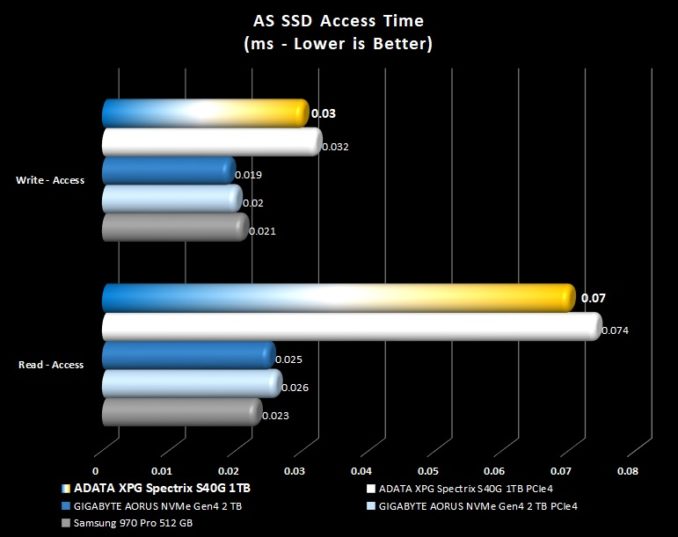 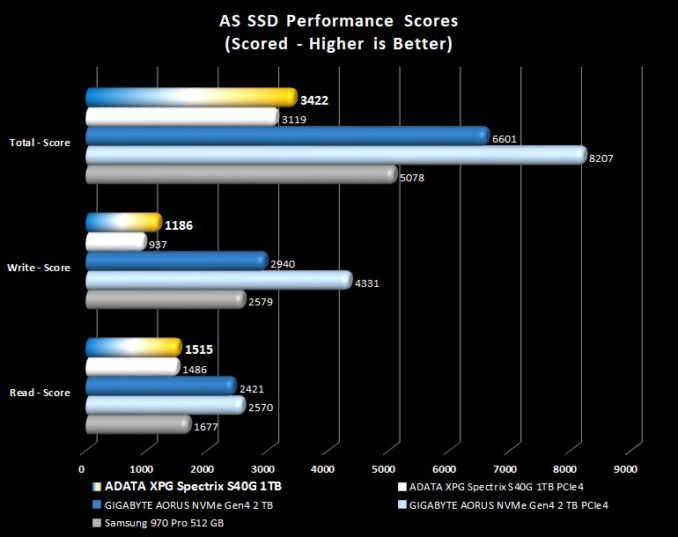 Access times in AS SSD were lacking, in particular, the write times, which leads to the overall score. The XPG Spectrix S40G managed a mid-range score. AS SSD, in particular, seems to be a tough nut for the S40G likely due to the use of incompressible data. 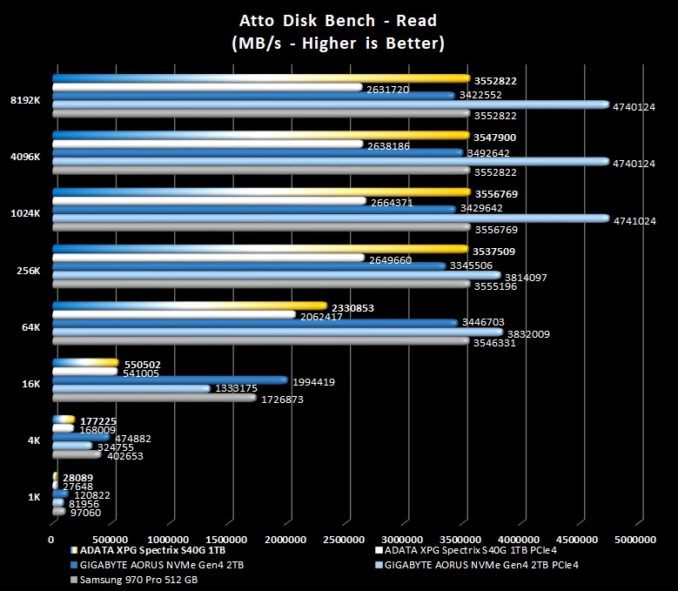 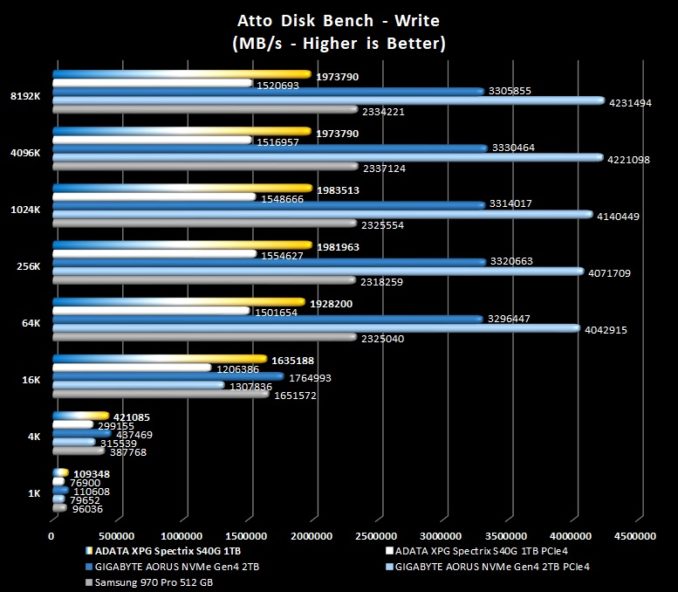 In ATTO, the XPG Spectrix S40G does well, particularly in the read testing trading blows with the Samsung 970 Pro on the larger files. Looking at the write results, however, we notice that once again, the Spectrix S40G isn’t coming close to its rated read speeds. What is interesting though, is the 16K and smaller files the S40G is performed surprisingly well beating the 970 Pro. 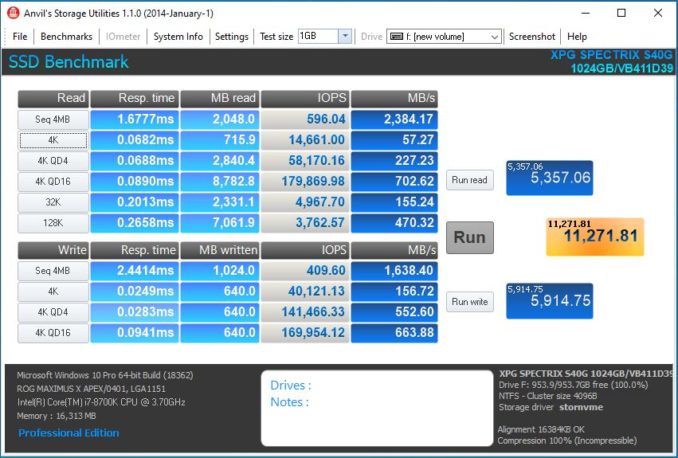 In our Anvil Storage Utility results, the S40G scored 11,271, which is more of a mid-range result than an enthusiast-level of performance.

The Spectrix S40G RGB is an M.2 NVMe drive aimed at gamers and enthusiasts looking for that little bit extra in the bling department. The S40G also looks very impressive on paper with 3500 MB/s read, and 3000 MB/s write speeds, AES 256-bit encryption, and a 5-year warranty. Add to that a stylish RGB LED heat sink that can be customized to accent your system, and we have a nice all-around enthusiast-level drive with performance and looks.

The reality is the XPG Spectrix S40G RGB only performed well during specific tests and rarely came close to its rated write speeds, overall when comparing Anvil benchmark scores, it was on the lower end of the scale. The combination of the Realtek controller and anemic 128 MB of DRAM cache didn’t do the Spectrix S40G any favors. Testing it against the Samsung 970 Pro and the Gigabyte Gen 4.0 drives in retrospect seems unfair, but those choices were made based on XPG’s ratings for the drive.

To be fair, the Spectrix S40G RGB SSD is in a completely different price category compared to the other two drives. Available at Newegg for $152.99, that’s $ 100 less than the Gigabyte and a full $200 less than the Samsung, but there are many drives in this price range with better performance, such as XPG’s own Gammix S11 Pro for $139.99. What you’re not getting is the RGB LED heat spreader.

The XPG Spectrix S40G RGB does give you decent performance at a reasonable price; what sets it apart is the RGB lighting. Given that it’s one of the few drives available with customizable RGB LEDs makes it easier to overlook the mediocre performance and still give it the “Approved” award.

Today we get an opportunity to look at another M.2 NVMe based SSD in the ADATA Gammix S11. The Gammix series of products are typically part of a higher performance line and the Gammix S11 drive is no different. The modules are able to reach speeds up to 3200MB/s sequential reads and 1700 MB/s on writes which, on paper, places it up there with other enthusiast level drives.

We stopped in to see the ever-expanding product line at Kingston and HyperX. On display were many new products like mobile storage, SSDs and HyperX’s first gaming peripherals.

Today we’ll be looking at the OCZ Vertex 2 120G SSD, which will go head-to-head with the Patriot Inferno 100G. Will the Vertex 2 be able to extinguish the flaming Inferno? Read on to find out!

Never had any issues with throttling in either motherboard. I didn't check the actual temps but throttling is quite noticeable and I didn't see any signs