JMicron recently released their new JMF670H controller, and ADATA was quick to implement this new controller in their new XPG SX930 line of SSDs. This new offering from ADATA comes in capacities of 120, 240, and 480 GB and promises excellent performance while keeping an eye on reliable endurance. Anytime a new controller hits the market, we’re always anxious to find out how it performs. So, let’s get started and see what the ADATA XPG SX930 has in store for us.

The XPG SX930 SSDs have been under embargo until recently, so we don’t have a lot of fancy graphics and marketing descriptions to share. However, we were provided a reviewer’s guide that gives us important information to pass along to you. The XPG SX930 SSDs are designed with enterprise grade MLC+ sync NAND flash, which ADATA claims results in high performance, as well as extreme reliability. ADATA further states their strict selection of MLC flash memory will ensure overall system efficiency and speed, which makes these SSDs ideal for gamers in terms of performance and stability.

The features and specifications below were provided by ADATA. Other than what we talked about above, the drive offers a 5-year warranty, supports TRIM, and has DDR3 DRAM for a Cache buffer. ADATA also implemented Pseudo-SLC (pSLC) Cache technology. This technology is normally associated with increased performance, but also helps with overall endurance. The JMicron JMF670H controller is said to compete with the likes of Silicon Motion’s SM2246EN and Phison’s S10 controllers and the price/performance ratio that they offer. 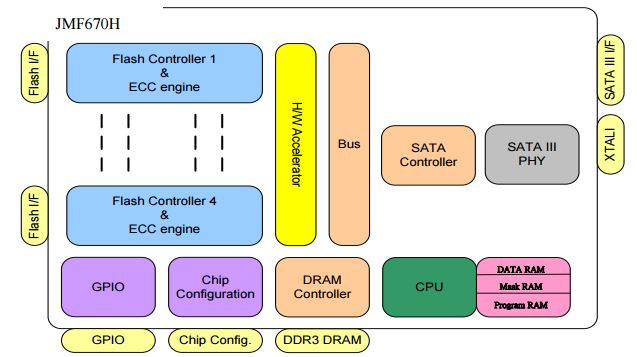 The XPG SX930 uses the SATA 6 GB/s (SATA III) interface, even though the push of late is to move SSDs to the PCIe lanes. The cost of PCIe based SSDs still drives a lot of people back to the aging SATA 6 GB/s interface, which continues to be a viable option for achieving a good balance between price and performance.

ADATA’s performance claims vary slightly depending upon the drive’s capacity. Below is the performance breakdown for each of the three offered capacities.

ADATA provides a free download of their SSD Tool Box, which is a full featured set of tools worth exploring. The utility offers system optimization, drive and system information, diagnostics, and the ability to secure erase the SSD.

The retail packaging is rather attractive and gives the potential customer a good idea of what they’re buying into. The box front has a window allowing for a view of the drive’s top side and lists many of the SSD’s features. Around back is more information presented in a multilingual format. The kit we were sent for review is what ADATA calls a desktop pack, which means you get a 3.5″ to 2.5″ adapter, mounting screws, and a spacer for 9.5 mm thick applications. A quick start guide is also included in the box, along with instructions on how to get your free copy of the Acronis migration software.

Once out of the package, we can see the drive is decked out with flame style graphics on the top that also has the SSDs branding information. At the bottom of the drive, we find all the bar code information including warranty code and serial number.

Inspecting the inside of the XPG SX930 reveals the memory packages and their ADATA branding, but they are sourced from a third party. Very few SSD makers actually manufacture their own NAND, so no big surprise there. ADATA doesn’t provide a lot of details on the NAND Flash they use other than to simply say “synchronous MLC+ NAND Flash.” So, depending on current availability and market conditions, ADATA is free to explore what fits their designs the best. The below pictures also show you the typical SATA data and power connections, the JMicron JMF670H controller, and the 128 MB NANYA DDR3 memory module used for the Cache buffer.

Here are the components used in our SSD test bed.

Today’s comparison samples include three high capacity SSDs in the Samsung 850 EVO (500 GB), Patriot Ignite (480 GB), and the ADATA Premier SP610. We’ll also include data from the Kingston HyperX Savage (240 GB). All of these SSDs were tested very recently using the exact same system components as listed above.

Each SSD is Secure Erased to make sure we get the best results possible. We do this before each and every test run to give the comparison samples the best environment possible for testing. Below are the tests we run with a brief description.

Beginning with CrystalDiskMark’s read benchmark, we see the XPG SX930 competing very well in the sequential and 4K tests. It fell a bit behind the other competitors in the 512K and 4K QD32 tests. CDM’s write tests show the XPG SX930 reaching advertised speeds and to be very competitive across the board here.

AS SSD read testing shows the XPG delivering solid numbers in the sequential and 4K tests, but it fell a little behind in the 4K-64Thrd run. The write tests showed much better results across the board where the XPG SX930 beat out the Samsung 850 EVO and ADATA SP610 in the 4K-64Thrd test. Access times showed very little difference between all the drives, but the XPG SX930 did have the best result of all in the write test. AS SSD also provides a scoring profile, where the XPG SX930 did pretty well on the write scoring, but not so much on the read side.

IOMeter shows the XPG SX930 doing quite well in the 2 MB read and write tests, and it threw out some decent numbers in the 4K tests as well. IOPS testing showed excellent performance as the read IOPS came in over 70K, and the write darn near hit 80K.

Just to check one other benchmark, we usually give Anvil’s Storage Utility a quick go. Below are the 100% incompressible and 0-Fill results.

Overall, the performance is as expected from an SSD of this class. It’s obviously not going to set any speed records, but it’s still a very quick SSD.

Now that the SATA GB/s interface is pretty much saturated as far as read/write speeds go, we see SSD manufacturers concentrating more on endurance, reliability, and cost effectiveness. ADATA seems to have done just that with the XPG SX930 as there really isn’t much new to report on the performance front, even with a newly released controller. However, the 5-year warranty exudes confidence in the long-term reliability of the XPG SX930, which is more than the standard 3-year warranty a lot of other SSD makers offer.

As mentioned, performance numbers aren’t earth shattering, but do meet ADATA’s claims. Rumor has it JMicron is considering a firmware update to enhance the read performance of the JMF670H controller, which as our testing shows could stand to be improved a little. That’s not to say the read performance was dismal, but it did fall a bit short compared to our other sample drives during certain test scenarios.

ADATA gave us the following MSRP for the three different capacity XPG SX930 SSDs. We were told the drives should hit eTailers like Amazon and Newegg within the next week or so.

Those prices are pretty much what we see across the board for similar capacity drives from the different manufacturers and are likely to be even a few dollars less once they actually become available to purchase. It’s pretty tough to compete with manufacturers that make their own NAND and controllers, but ADATA seems to be hanging in there. ADATA’s XPG SX930 gives us yet another viable option worth exploring if you’re in the market for a good performing, reliable, and affordable SSD.

The XPG Defender Pro is a Mid-Tower chassis that offers enthusiast-grade performance with exceptional airflow and functionality. Designed to accommodate E-ATX motherboards, large graphics cards, custom water cooling, and plenty of RGB lighting, the Defender Pro is a gamer’s dream chassis. Positioned between XPG’s flagship chassis, the Battlecruiser, and its first offering, the Invader, the Defender Pro, provides all the premium features with a reasonable price tag.

JMicron recently released their new JMF670H controller, and ADATA was quick to implement this new controller in their new XPG SX930 line of SSDs. This new offering from ADATA comes in capacities of 120, 240, and 480 GB and promises excellent performance while keeping an eye on reliable endurance. Anytime a new controller hits the market, we're always anxious to find out how it performs. So, let's get started and see what the ADATA XPG SX930 has in store for us.