Alphacool just announced its latest full cover waterblock for MSI’s GeForce RTX 3080/3090 Ventus 3X graphics cards, the Eisblock Aurora Plexi GPX-N. Designed to cover every component of the graphics cards that requires cooling (including the GPU core and VRMs), this block should be a major player in the custom water cooling market. Naturally, Alphacool included other features such as addressable RGB lighting and an available backplate (purchased separately). Continue reading for the full announcement from Alphacool. 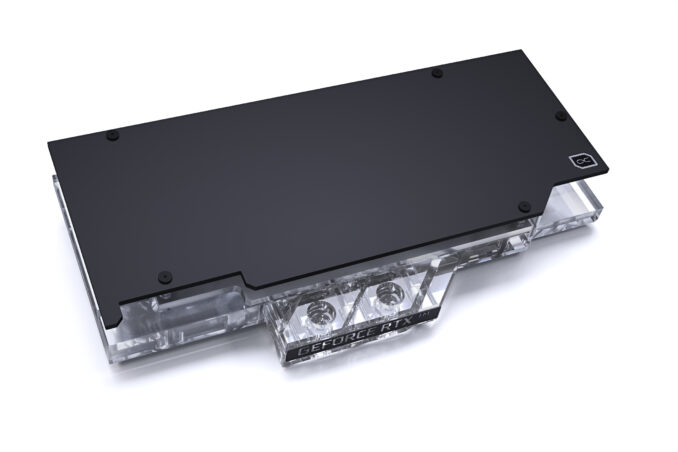 Today, Alphacool presents its latest RTX 3080/3090 GPU cooling block for the MSI GeForce RTX 3080/3090 Ventus 3X to pre-order. Delivery is expected to start at the end of October. This cooler covers all the necessary components that require cooling. This includes the voltage converters, graphics memory and of course the GPU. All known hotspots of the graphics cards are completely cooled with water. Alphacool includes special 1 mm thick Ultra Soft thermal pads with this GPU cooler. As the name suggests, these are very soft and nestle perfectly to the components to be cooled. When the thermal pads heat up, the consistency and behavior is more like a thermal paste than a thermal pad. This of course has a positive effect on heat dissipation and is thermally far superior to standard thermal pads.
The Alphacool Eisblock Aurora Plexi GPX-N RTX 3090/3080 Ventus comes with a suitable backplate. This does not have to be purchased separately.
Like all Eisblock Aurora coolers, these models offer a comprehensive Digital RGB, sometimes better known as aRGB, illumination.

About John Nester 362 Articles
John started writing and reviewing PC components for Overclockers.com in 2015, but his passion for PCs dates all the way back to the early 1980s. His first personal computer was a Commodore 64 with a cassette drive. As a dedicated member of the news team, he focuses his articles on new product releases and software updates. He reviews a wide variety of PC components including chassis, storage drives, keyboards, and more. John works in technology as a C.A.D. designer for a major automotive manufacturer. His other passions in life include motorcycles, hunting, guns, and football.

MSI has officially launched its 500-series motherboards and the full line-up is quite extensive.  Starting with the top series, there are four MEG Z590 motherboards listed including the GODLIKE, ACE, UNIFY, and an mITX UNIFY version. Next in line is the MPG Z590 GAMING CARBON WIFI and MPG Z590 GAMING FORCE. The MAG series is MSI’s “Military Grade” line and is highlighted by the MAG Z590 TOMAHAWK WIFI. Finally, for the business market MSI introduces several Pro series motherboards.

Our next stop in the long tour of CES 2016 was with MSI. MSI had a lot of great things to show and even won a few awards for these devices. We will show you their Vortex mini PC, the Gaming 27XT 6QE AIO Desktop PC, GT72 TS Tobii laptop, and more!

Today we have the MSI X370 SLI Plus on the test bench. This sample is one of the lowest priced motherboards equipped with the AMD X370 chipset in the retail market. Just at a glance you can see that it’s a bit stripped down from its bigger brothers but still appears to have everything you might need to get your Ryzen CPU up and going, even overclocked, and at a reasonable price. The AM4 platform is still relatively new and with that comes a few growing pains. This leaves some of the memory options a bit limited and just finding the right memory for your motherboard can be a challenge since there’s still some compatibility issues on all boards at the moment. There’s another AGESA update scheduled for May, hopefully this will open things up a bit for us enthusiasts.

Alphacool just announced its latest full cover waterblock for MSI's GeForce RTX 3080/3090 Ventus 3X graphics cards, the Eisblock Aurora Plexi GPX-N. Designed to cover every component of the graphics cards that requires cooling (including the GPU core and VRMs), this block should be a major player in the custom water cooling market.