Alphacool is an experienced OEM specializing in water cooling components and accessories. They have been around for over a decade and have their hands in designing and manufacturing cooling systems for many different industries. Of course, we’re most interested in their consumer desktop components and the Eisbaer Extreme 280 is Alphacool’s high-end all-in-one liquid CPU cooler.

The perfect all-in-one CPU watercooling solution. Simply install and receive the best cooling performance. If there’s a need, simply expand the circuit using the quick-release fasteners. The pump is one of the most powerful on the market and the be quiet! Silent Wing 3 fans perform well with low noise.

be quiet! is known for its extremely quiet and powerful fans. Due to this, we have partnered with be quiet! and equipped the Eisbaer Extreme with the fantastic be quiet! Silent Wing 3 fans.

Accept no compromises! The Eisblock XPX CPU cooler is currently one of the most powerful water coolers on the market, winning multiple awards for performance from independent reviewers. The cooler is simple to install yet the cooler is packed with technology inside to ensure high performance. This includes the patented ramp technology to optimize the water flow in the cooler. You can learn more about the CPU cooler here.

The elegant case is largely made of aluminium. However, the radiator is made of pure copper. Don’t worry, the aluminium doesn’t touch any fluid! This guarantees an extremely high cooling performance. Copper is superior to aluminium as a material to dissipate heat and this is why we like to use it for radiators. The large aluminium housing encloses and protects not only the radiator but also the fans, the reservoir and the pump.

The latest version of the VPP755 not only offers incredible performance but is extremely quiet in operation. Of course, you can control the pump as well as the fans via a PWM connector. The huge reservoir encloses the pump almost completely. This further minimizes the background noise, as the reservoir also serves as sound insulation. The design has been patented by Alphacool. Further details about the pump can be found here.

There is information about the cooler on all sides of the box. The front has the most information including a good image of the Eisbaer Extreme’s hexagonal grille, tubing, and water block. Underneath the model name, it also shows all of the supported CPU sockets of both Intel and AMD. Along the bottom, there are details on parts used, including the VPP pump, XPX block, fans by be quiet!, and quick disconnects.

The cooler is well-protected with foam to hold it in place during transport.

Other than the cooler itself, a multi-lingual user manual and bag of all of the mounting hardware and accessories are all that’s included in the box.

The Eisbaer Extreme has a simple aesthetic with a completely matte black finish which will blend in with any color theme. The cooler is rather large with a 2 x 140 mm radiator, pump, and reservoir all within the aluminum and plastic shroud. We can also see the fans are set up to pull air through the radiator as opposed to the more common setup of pushing air through.

The water block has a blue Alphacool logo and white model name displayed on top of an aluminum housing. The 3-pin plug is solely for illuminating the Alphacool logo. The base of the block has recessed screws and a smooth finish, although not mirror-like.

The shroud has a fill port and a reservoir window to easily monitor and add coolant when needed. The IN and OUT lines are clearly displayed on the radiator shroud as well.

The Eisbaer Extreme has a hexagonal grille for protecting the radiator from damage on one side and the fans on the other. The plastic side pieces to the shroud have a subtle Alphacool logo on the ends. On the fan side, we can see the be quiet! branded Silent Wings 3 fans along with anti-vibration foam lining the fan opening of the shroud.

One of the best features about the Eisbaer Extreme is that it makes use of quick disconnects on the tubing. This makes for easier installation and potential for future expansion of the loop. As mentioned earlier, the tubes are labeled IN and OUT on the shroud so that water is flowing in the correct direction, the quick disconnects are also installed in such a way that they can only be connected in the proper flow direction.

Here, we have a better look at all the parts required for mounting the block to the motherboard. There are seven total pieces needed to mount to Intel’s socket 1151, in this case, a Z370 motherboard: the block itself, a bracket to match the motherboard socket, screws, springs, washers, nuts, and motherboard backplate.

The first step is to slide the required bracket pieces into slots on the edges of the block. The pieces will snap and lock into place when installed correctly.

Next, we have to mount the screws onto the bracket. I like this method in that we won’t have to try shuffling the block, backplate, and screws when installing. The order that the individual pieces are placed can be seen below. We have the screw, spring, and washer on the top side to even out the mounting pressure. Then, a nut goes on the other side of the bracket to hold the screws in place.

The backplate goes on the back of the motherboard, and there are two strips of tape to secure the backplate if you choose to do so. I don’t like securing backplates to my motherboards with tape and would rather have a little more trouble installing the cooler than have sticky residue left behind on my board. However, many cooler manufacturers provide tape for their backplates, it’s not just an Alphacool thing. To install the backplate onto the motherboard, slide the screw sockets along the grooves in the backplate until they match the mounting holes on your board, then set the backplate into the holes. Next, we just have to apply thermal paste to the CPU (not pictured), slowly place the block down onto the CPU, secure the screws by hand, and tighten with a screwdriver.

The Alphacool Eisbaer Extreme easily outperformed the four air coolers and two other AIO liquid coolers tested. This is the expected result since the Eisbaer Extreme uses a 280 mm radiator and 140 mm fans, making it the largest cooler in my testing pool. Although, I would have liked to see it outperform the field by a larger margin considering its size and cost. 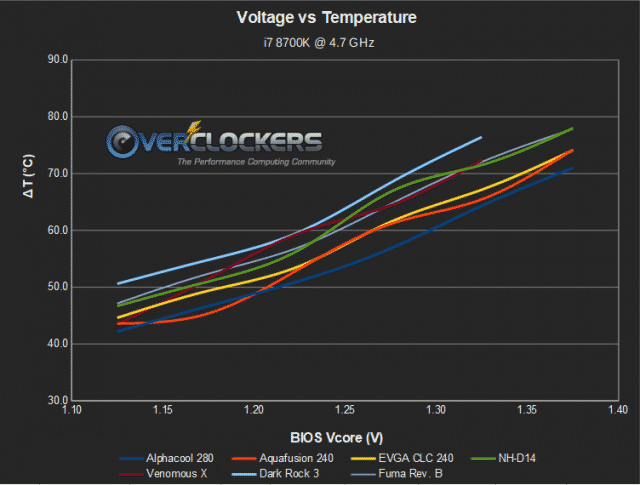 The noise was on the mid-high end of the spectrum for the coolers I tested. Although, that doesn’t mean it’s actually loud in practice. Remember, the SPL readings are made with the fans at 100% speed and on an open bench, so these are worst-case scenarios. So, other than the Aquafusion, all of these coolers should be relatively quiet at 2-3 feet while inside of a case, even at 100% fan speed. Of course, lower fan speed will help as well, and the Eisbaer Extreme has the headroom to allow that without sacrificing much in cooling. 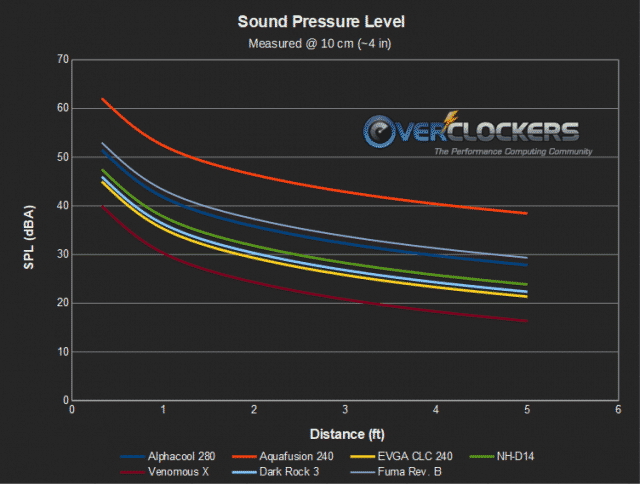 The Alphacool Eisbaer Extreme is a large 280 mm AIO liquid cooler made with quality components usually reserved for custom water loops. The matte black finish of the aluminum and tubing along with the hexagonal grill make for aesthetics that blend with any theme.

The built-in reservoir window and fill port are great for monitoring and refilling or topping off the coolant. The use of quick disconnects makes for effortless expansion for adding a GPU into the loop without needing to drain, disassemble, re-route and re-install every component of the loop.

Results of the cooling and noise testing are favorable to the Alphacool Eisbaer Extreme with it outperforming the rest of the field along with reasonable noise levels.

If there has to be a downside to Alphacool’s Eisbaer Extreme, it would have to be its size. It’s truly a massive AIO cooler since the housing has to hold many parts, and one should be sure it will fit into their case before purchase.

Coming in at around $278 (converted) may seem expensive for an AIO cooler, but we have to remember that the cooling parts used are the same that would be used in a custom loop along with the quick disconnects and aluminum housing to hold all the parts. The price isn’t bad for what Alphacool is providing, however, the performance/price isn’t stellar on the Eisbaer Extreme since it doesn’t beat out other cheaper AIO coolers by a huge margin.

The Alphacool Eisbaer Extreme 280 is basically a custom loop packaged together into an aluminum housing instead of the traditional AIO unit where the parts are specifically designed to be for an AIO unit. So, the Eisbaer Extreme has the flexibility, perks, and performance close to that of a custom loop while still being relatively compact.

Today, Alphacool launched the Eisblock Aurora Acetal GPX-A for the AMD Radeon 6800/6900/XT reference GPUs. Like all of the Eisblock water blocks, it features a full coverage nickel-plated copper cold plate. What is unique to this model is Alphacool decided to reduce the water block thickness as well as the thermal pads creating significantly improved cooling performance. The manufacturer suggested retail price is $159 and is currently available directly from Alphacool. Below is the press release along with the specifications of the cooler.

The firm known as be quiet! is on a roll. Today we are looking at a unique heatsink, one that has a pair of tandem fin stacks. But the fin stacks are set horizontally while the fan or fans blow downward, washing the motherboard and RAM with air. Wonder if it works? Let’s see!

That is one awesome looking AIO, nice review!! :attn: