It has been a long time since we reviewed a CPU block here at OCF, but that will have changed after today! Aqua Computer has released another CPU water block in its long running Cuplex series (started in 2001) named the Cuplex Kryos NEXT. This product aims to improve on the last generation Cuplex Kryos and and help keep Aqua Computer well placed in the market. Get comfortable in your chair and let’s see what the Cuplex Kryos NEXT has to offer!

Below is a list of the technical specifications and features from the Aqua Computer website. Listed below are all the dimensions one should need in order to make sure the block will fit on your board. Since this is socket-specific, you will be hard pressed to find an incompatibility with the standardized spaces on motherboards, but, as always, make sure you are checking!

The Cuplex Kryos NEXT will fit on Socket 115X, AM3, Socket 2011, and Socket 2011-v3. Its threads are your standard G 1/4″ so you can place any barb matching that thread in it for your loop. Just make sure you look below at the distance between the threads on whichever version you have as they are slightly different on the Vision compared to the others.

There are three versions:

Additionally, there are a slew of colors: Acetal Black, Acrylic Glass, Copper, Nickel-Plated Brass, and Brass PVD. This yields over 90 different combinations! If you would like a RGB LED solution, they have that too in any of the acrylic versions of the Vision variant.

Take a look at the table below for more details:

Below is a cutaway of the NEXT Vario. Here you can see how adjusting the four actuators will allow for some play in the baseplate in order to adapt the cooler to your CPU IHS’s unique shape. Better contact with mating surfaces using this device is said to improve results by around 2 °C for modern CPUs with a 100W TDP. 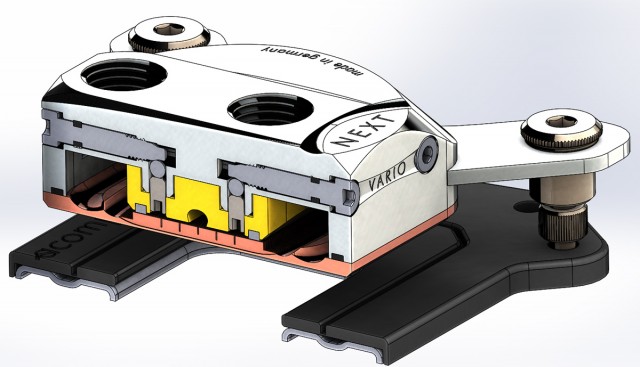 The Vision up close showing its OLED display:

A few of the 90 combinations:

Below is a video from Aqua Computer website describing the product.

Meet the Cuplex Kryos NEXT Waterblock

In the slideshow below, you are seeing the Cuplex Kryos NEXT’s retail packing. On one face, you see a picture of the block (half cutaway) against a black background along with the name of the product inside. Flipping the box around shows a different view of the block as well as some of the features and options for all the NEXT blocks.

In order to open up the box, you will need to slide the sleeve off which exposes the actual box where the hardware and accessories reside. The accessories are on top, while the beautiful block sits below it underneath some form fitting foam to separate it from the rest of the goodies inside the package. Pictured is the Socket 2011 mounting as well as 115X mounting. What is not pictured are the M4 washers included for the 115X mount.

Something to note out of the gate with the mounting is that both kits do not come with the block. You will buy the NEXT for your specific socket. If you change sockets, you will need to purchase the other kit (in an Intel to AMD or AMD to Intel swap).

Next up we see our first pictures of the actual block. I will tell you right now I am absolutely enamored over the look of the Cuplex Kryos NEXT even in standard form. The nickel plated brass sample we have, and overall look, really appeals to me. I hope we get a chance to look at the Vision as that OLED display would look awesome in a lot of builds.

One thing to note is that this block does feel pretty heavy, at least compared to the EK Supremacy I was using. Feels like a beefy and well-made block.

The nickel-coated copper baseplate has a mirror-like finish to it allowing for best contact with the IHS on your CPU.

I broke down the NEXT and took apart the baseplate to show the inner workings of this block. We can see the baseplate has dozens of rows of micro fins to help get that water to touch the most surface area you can for optimal cooling. The intake port for the block is in the middle which has the water flow over the micro fins and is discharged in two directions to be taken out by the top located outlet. Aqua Computers has worked hard to improve on flow rates in the NEXT. In glancing at other reviews which test flow rate, the Kryos NEXT was still fairly restrictive. It isn’t anything to worry about, just something to know going into building the loop.

Below are some diagrams showing how the block mounts to each specific socket. AM3 and socket 115X both require the use of the backplate mounting (in different orientations), while Socket 2011 simply screws in from the top. This cooler has “hard” stops so you cannot over-tighten. It’s the same pressure each time. In my mount testing, I found the TIM spread to be consistent on every mount.

Next are some gratuitous pictures of the old block on the test PC, and the Cuplex Kryos NEXT on the same system. Pretty, isn’t it?!?! This will look good in a lot of builds. If not in this form, one of the 89 others I am sure will work!

All applications listed below were run for a total of one hour. This gives the loop enough time to become stable as far as peak temperatures go for these applications as well the loop. I then give the loop around 30 minutes for a cool down in order to come back down to the starting temperatures. The new CPU block results were taken across three mounts with the lowest temperature results used (a “proper” mount). The values you are seeing in the graphs below are PEAK temperatures of the highest core.

Now we come to the payoff… the results! Since we do not typically work on CPU blocks themselves for comparison, the only item I can compare it to is my existing block versus the Cuplex Kryos NEXT. The NEXT comes with a high-end thermal paste, Thermal Grizzly Kryonaut, so it was used in the testing while the old block used MX-2. Although this adds another variable to testing this block, it represents a change from an average setup to a premium solution, including the TIM. As has been tested on the web, typical variance between TIM is around 1-2 °C, so you can subtract that value to see approximately the improvement from just the block swap.

As you can see from the results below, there were improvements across the board, to the tune of a few C for each of our tests. The minimum was 4 °C while the maximum was 7 °C.

Moving on to our overclocked settings, we see much of the same, improvements across the board! Improvements are anywhere from 3 °C to 8 °C here in the overclocked results.

Aqua Computer has been putting out quality products in the watercooling market for years. Instead of resting on their laurels, in 2015 they set out to to make “serious improvements” from the original Cuplex Kryos first released in 2010. After their research came the new and improved Cuplex Kryos NEXT. On the appearance front, even in standard form, the nickel-plated NEXT is a block you will want to see used in your cooling loop. It is gorgeous. Add the Vision portion to it with its OLED display and you have, in my opinion, one of the best looking (and informative!) blocks to hit the market in a long while.

But, looks and bells and whistles aren’t everything. Improvements in flow rate and updates to the baseplate, among other things, have yielded improvements over the the previous Kryos and in more thorough testing found on the web, really is a top tier CPU waterblock. Though it is more restrictive than others, it performs better at the same flow rate and even much lower flow rates as shown the link above.

So how much for this great looking and performing block? The model we reviewed, the standard, Nickel-Plated Brass top/baseplate should come in around $75-$80 (84.90€ incl. VAT). The least expensive would be the black acetal housing and copper baseplate combo coming in at $50-55 (55.90€ incl. VAT). Finally, if you wanted the top of the line option, which would be the a combo of both Vario and Vision with the PVD coating and the .925 sterling silver baseplate, would ring up to almost 290€ or about $260. Pricey indeed on the dream block, but how cool would it be to have that OLED display and the ability to change the baseplateplate geometry… oh, and in such a good looking block to boot?! Just remember when buying this block to get the right SKU for your socket!

I’m sure you can tell by now that the Aqua Computer Cuplex Kryos NEXT CPU block is a winner. It performed well in my tests beating out a solid performing block. Other tests with more samples show it towards the top of the pack as well so the performance is certainly there. Beauty is in the eye of the beholder, but the overall shape looks like a post modern piece of art to this guy. Its a breath of fresh air in a market dominated by your standard fare water block. If the Nickel-Plated isn’t your style, there are a slew of different options, again 90 of them, that will fit any build theme or anyone’s taste. If you are looking for a great looking block that will look incredible in any machine and has top notch performance, look no further than the Cuplex Kryos NEXT my friends.

It seems everyone is jumping in the all-in-one water cooling market these days, and Cooler Master hopes to make a splash with their recently released Seidon 240M. Today is official launch day for the new Seidon 240M AIO, and Overclockers is here to provide you with a look at this new offering from Cooler Master. So, without further ado, let’s dive in!

G.Skill has announced two new additions to their already impressive stable of memory kits with the new DDR4-4266 64 GB (8×8 GB) and DDR4-4000 128 GB (8×16 GB) set designed for the latest Intel Core X-series processors using X299 based motherboards. GSkill says the kits are the highest speed available at such a capacity and will be available in 2019 Q1.