One day as I was in my chemistry class, I overheard a statement by my teacher; she said that distilled water doesn’t conduct electricity. As soon as I heard that, a light bulb went off on my head:

I remembered that the only reason electronics cannot be exposed to water is because water conducts electricity, so why don’t I totally immerse my computer in distilled water. That would solve the problem of heating in one shot, ie I could cool the memory, CPU, chipset, the video card simultaneously, and moreover it would look cool.

With this in mind, I fired up my computer and went on a research rampage.

The first thing I learnt was that this type of cooling is called Passive Immersion Cooling. As a matter of fact, it is used in super computers such as Cyrix, where the whole computer is immersed in a Flouro-Carbon, and this way the super computer always stays below 20 degrees Celsius.

Now I had to find out for sure if distilled water would work. Well bad news guys, I found out that although distilled water (about $1 a gallon) doesn’t conduct electricity it’s outrageously corrosive. So I abandoned the idea of using distilled water. Now I had to find some other suitable liquid, that I could use. Mineral oil seemed to be a good choice, but it was too dense and it is, as you know sticky; I mean if I immerse my motherboard in that oil, I will never be able to clean my motherboard again.

Since this amateurish search was getting me nowhere, I started looking for those professional products (those used in Cyrix Systems) and one compound stood out, FLOURINERT, by 3M. It has ideal freezing vaporizing points and also has a great heat transfer factor, so I decided to use FLOURINERT for my project.

Now that I have my desirable liquid for this project, I started working on the case for my submersible computer; I thought that if everything inside was visible then it would look nice, so I bought myself some acrylic sheets.

Then I made a rectangular box like the one below 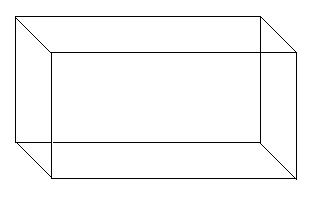 with the acrylic sheets I had. I used an adhesive – marine silicone adhesive or aquarium adhesive works great; I found this adhesive in an aquarium shop.

Now for the assembly:

I did not seal this acrylic barrier with glue; I just used screws, so that I could take it out later. Next I made some holes on the acrylic barrier so that wires go from the HDD, Floppy drive, CDROM and Power supply to the mother board: 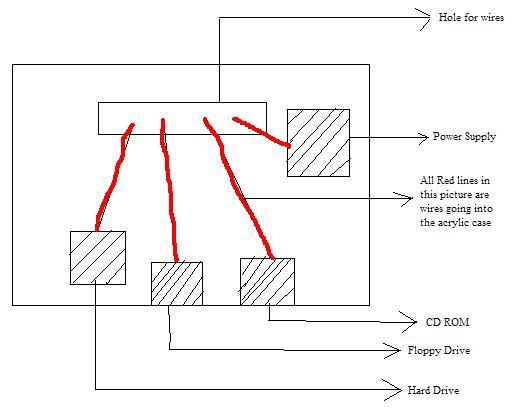 I also made a hole for the CD-Rom/ Floppy Drive, so that they can be accessed from the outside.

Next I made an inlet outlet for the FLOURINERT to go in and out: 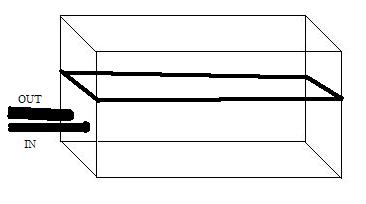 I used plastic tubes and secured them with a washer and epoxy so that there is no leakage.
{mospagebreak}

Now I have set up the infrastructure, with which I could transport the FLOURINERT from the acrylic tank to the cooling station. The cooling station I used was the refrigerator I modded before. Next I filled the refrigerator’s icebox with FLOURINERT, set the thermostat to -2 degrees Celsius and attached 2 pumps on both sides, ie. in and out. I regulated the pumps in such a way that the intake and outtake of FLOURINERT will be equal: 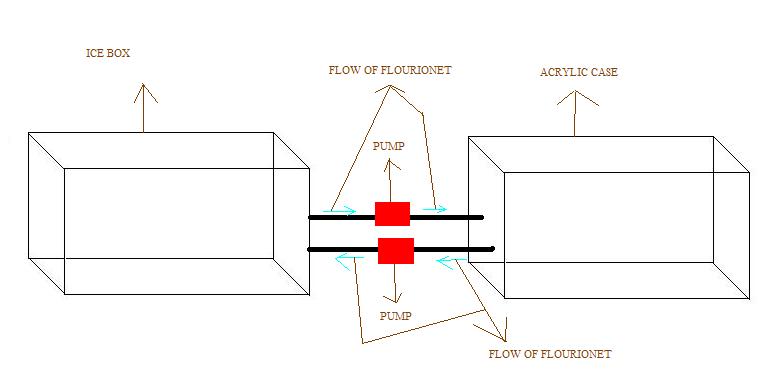 Now I had to make some more holes on the top of the tank above the acrylic barrier so that wires could go in/out:

Now I covered the acrylic box with another acrylic sheet with screws:

Now I hooked up everything and started the pumps. When the temp between the FLOURINERT in the acrylic tank and the icebox were equal, I fired up the computer and everything worked fine. When I overclocked them to run at ½ times more than their original speed, the CPU was running at 10 C and the GPU was running at 15 C. Now that must satisfy all those hardcore overclockers out there.

I apologize for the pics, I did this project way back in my country and now I moved somewhere else, so I provided you guys with drawings.

Ed Note: Details are sketchy, but the idea is one that has some merit and has been done before. For those interested, some additional reading:

Today I will be looking at a low profile, moderately priced heatsink from Arctic, the Alpine 11 Plus. This heatsink fits within a smaller case and gives better cooling than the stock Intel heatsink while retaining a small footprint for use in tight spaces.