With the recent release of Zen 2 for desktop, many users were wondering when we may see them hit the mobile segment which is still based on the Zen+ 12nm architecture. If you haven’t heard yet, the wait is over at CES 2020. Ryzen 4000 mobile has arrived bringing with it some very low TDPs and higher thread counts on the updated Zen 2 platform and 7nm process. On the video card front, AMD officially announced the Radeon RX 5600 XT XT which will slot in between the RX 5700 and recently released RX 5500 XT. Along with the new CPUs and video card, the big gun came out in Threadripper 3990x and its 64 core, 128 thread content creating beast.

Starting with the Renoir based APU’s, AMD’s flagship U-series part, the Ryzen 4800U, brings eight cores and 16 threads with a 15W TDP. This should compete well with Intel offerings. AMD says the 4800H 45W part has the same boost clocks and thread count as 4800U except double the base clock and triple the TDP. AMD and its 2nd generation Zen architecture has turned some heads and will continue to do so in the mobile market in 2020. 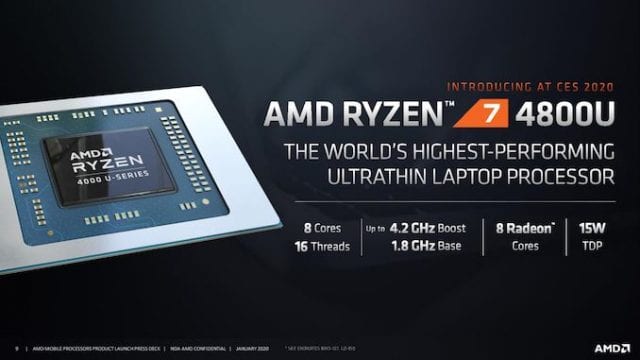 These out of the way, AMD updated and announced other new products including Ryzen Threadripper 3990x – a 64c/128t monster for the HEDT platform, Radeon Graphics products for laptops including the RX 5600M and RX 5700M along with AMD FreeSync “Premium” said to make it easier for gamers to identify and select displays for the best gaming experience.

Below is an excerpt from their announcements along with links to each!

Featuring the world’s most powerful ultrathin laptop processors and desktop processors, alongside the ultimate graphics cards for 1080p gaming, announcements include:

Today at CES 2017, here in Las Vegas, we had the pleasure to stop by and talk with AMD. Stay tuned for some details regarding both Ryzen CPU’s and Vega GPU’s.

Ahh, new generations of video cards. Gamers and overclockers eagerly await their arrival every time a new one comes around. This one was met with a bit of controversy when rumors circulated that AMD was changing the numbering scheme. That they did, but is the relatively inexpensive 6870 a stout contender – especially for the price? Let’s find out.

This article is a quick precursor for our upcoming review of the ASUS Crosshair IV Formula, which houses AMD’s newest chipset, consisting of the 890FX northbridge and SB850 southbridge. The CPU used in that review will be AMD’s recently released Athlon II 640, so we’ll have a look at that too.

Honestly, the Zen 2 mobile CPUs are probably what I'm looking forward to the most out of CES this year as I'm keeping half an eye out for a new laptop, and AMD trading blows with Intel on the mobile side now will (hopefully) help bring prices down.