G.Skill has recently announced the release of the DDR4-4400 CL17 Trident Z Royale kits available in 16GB and 8GB modules. With timings of CL17-18-18-38, these memory kits combine high speed with low latency. Here is the official press release from G.Skill.

(12 June 2020) – G.SKILL International Enterprise Co., Ltd., the world’s leading manufacturer of extreme performance memory and gaming peripherals, is releasing new extreme-speed DDR4 memory kits that push 16GB and 8GB modules up to DDR4-4400 with a low latency of CL17-18-18-38 across the board, under the Trident Z Royal family. Upgrading specifications across all three fronts of memory frequency speed, module capacity, and low memory latency, these specifications are engineered with Samsung B-die ICs and designed for the latest Intel Z490 platform to achieve higher performance for gaming and content creation.

The High-Speed, Low-Latency Challenge with 16GBx2

As 32GB memory total capacity becomes the standard for gaming PC and performance PC builds, G.SKILL recognizes the importance of extreme performance 16GBx2 memory kit configurations. Rising to the challenge, G.SKILL has created the DDR4-4400 CL17-18-18-38 memory kit with 32GB (16GBx2) capacity under the Trident Z Royal family. See the memory kit stress testing on the MSI MPG Z490 GAMING PLUS motherboard with an Intel® Core™ i5-10600K processor in the screenshot below. 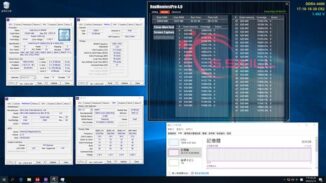 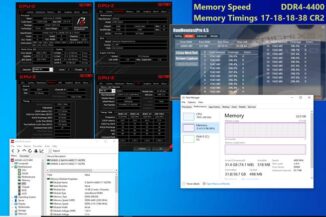 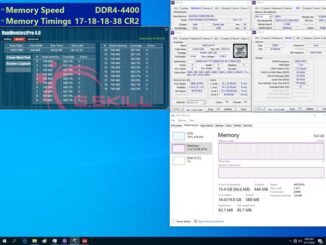 Established in 1989 by PC hardware enthusiasts, G.SKILL specializes in high performance memory, SSD products, and gaming peripherals designed for PC gamers and enthusiasts around the world. Combining technical innovation and rock solid quality through our in-house testing lab and talented R&D team, G.SKILL continues to create record-breaking memory for each generation of hardware and hold the no. 1 brand title in overclocking memory.

The announcement yesterday that Intel would use PC133 RAM to power a Willamette model sometime later next year is really no big deal. That’s been rumored for quite some time, and this is going to be a “value” Willamette system,

G.Skill has been around for 25 years now, and since their inception have brought performance memory products to the PC enthusiast crowd. With the release of the Intel X99 chipset, and the accompanying need for DDR4 memory, G.Skill has their initial product offerings available in the form of their Ripjaws 4 series. They sent along their DDR4 3000 MHz 4X4 GB kit for us to have a look at today, which just happens to be the same kit we used for the Intel Haswell-E i7 5960X review.

I'm down for some higher speed ram I think, but without the price increasing fancy heat spreaders and RGB.

I'm down for some higher speed ram I think, but without the price increasing fancy heat spreaders and RGB.

I second that! I miss the days of getting nice ram without all the added lights and flashy heat spreaders. It's the primary reason I went with my Team Group ram when buying B-die: nothing fancy, just good ram. I'll gladly pay for clocks just not the lights and other nonsense. It would be nice to see companies like Mushkin get some better clocks and timings with their simple clean looks.

If you want a new memory kit which is a higher frequency and quite cheap then there are Thermaltake ToughRAM 4400-4600 CL19 kits which are without LEDs but tall black/silver or white/silver heatsinks. All of them are based on Hynix DJR so the same as in top and most expensive 4800+ kits nowadays.
On the other hand, where will you use any higher frequency RAM? AMD is not scaling well past ~3600 and Intel has barely any improvement gains past ~4266. I guess that high-frequency RAM will have more point when or AMD bumps 1:1 IF ratio to let's say 2500MHz or we will see DDR5.

I second that! I miss the days of getting nice ram without all the added lights and flashy heat spreaders. It's the primary reason I went with my Team Group ram when buying B-die: nothing fancy, just good ram. I'll gladly pay for clocks just not the lights and other nonsense. It would be nice to see companies like Mushkin get some better clocks and timings with their simple clean looks.

Mushkin is out of the enthusiast market since ... early DDR3. They had nothing after their last Elpida kits. I can even say they started to disappear when Micron D9 DDR2 problems started and because of too high RMA rate, they replaced their whole memory line with different IC.

B-die is only in 8GB and 16GB modules and is harder to set at a higher frequency than the new Hynix or Micron IC. Since they're not manufactured anymore, then these kits usually cost a lot and whatever left will be replaced soon. I even wonder if these memory kits in the news will appear in stores as many of these top kits are like vaporware. A lot of noise in press releases and later you can't find them in stores and go EOL within some weeks, or never appear on the website's product list.

A bit offtopic but the Steel 4400 that I used for review could reach 4666 CL16. I guess that Patriot will replace these kits with some Hynix IC soon, the same as every other manufacturer is doing right now. HyperX already replaced all their 4000+ kits with Hynix DJR. Corsair has mostly Spectek in 4000+, ADATA has mixed IC, whatever fits. New manufacturers like Thermaltake or Gigabyte (well someone else is manufacturing their RAM) are using Hynix in 4000+ too. Just saying that if anyone wants a good and not overpriced Samsung kit then better decide soon. On the other hand, if I was buying a memory kit for gaming right now then I would get 2x16GB but then Samsung IC is almost not available at a reasonable price.

Woomack have you played with the Team T-Force XTREEM sets like any of these? Not that speed specifically, any of them. I know you did the RGB set in a review but was wondering about these because they don't have all the RGB nonsense and are older models.

This kit should run pretty well but I didn't have the luck to mine. Even though it was overclocking till some point then pretty much every other brand Samsung B 4000+ memory that I had, was overclocking better, including mentioned earlier Patriot Steel which is also cheaper. There are some users on the forums who had much more luck with this specific memory kit so it's not a rule.

As far as Team Group memory, I have mixed feelings about them. Some of their kits run great, some are already at the edge of stability with their XMP profiles.

Probably today will arrive Team Group Dark Pro 2x16GB 3600 16-16-16 on Samsung B. I rarely buy memory kits in the last months as I just can't afford to keep buying RAM but this one was at a reasonable price and I wanted 2x16GB Samsung B kit so I made an exception.
Another thing is that for gaming+additional stuff at the same time, 16GB is starting to be a minimum. When I run a game and some more things in the background then I reach 12GB+. Sometimes I have a game in the background and I run photoshop to edit some larger photos and then it passes 16GB.

I appreciate the link and apologize I missed that somehow. Very interested in your findings on your incoming set for sure.

My plan is to keep a couple good B-die sets around. Right now I'm primarily looking for a high XMP set of B-die to test my setup. So far I think it is the memory controller limiting me because multiple sets have not overclocked well. Only one was B-die though so not sure with my current Team Group B-dies since no matter what I set them to they seem maxed out where they are at 3600 15,15,15. On the other hand my current sticks could fall into that category of Team Group that is maxed out already you speak of. It's more curiosity for me at this point, not so much if I get gains in performance or not. Thanks for the info.

The main difference in Samsung B "IC quality" is how they run at really tight timings but I mean like 4000+ CL12 CR1. However, really tight timings run only on few motherboards and are important only in competitive benchmarking. I had many kits that could run at 4600+ but not many could run at 4000 CL12 CR1.
Intel Comet Lake-S is so far really disappointing in memory overclocking. Most motherboards have some weird clock walls or can't run at CR1 at 3600 or above. On the other hand, AMD is scaling well only on the IF ratio 1:1. It's fun to OC till 5000+ but performance in benchmarks is quite disappointing when you can achieve about the same at 3600 and 4600+.

From higher XMP still on Samsung IC there are almost only G.Skill kits. Most other brands (also including G.Skill) are releasing new 4000+ kits at Micron/Spectek or Hynix IC. Seems cheaper and easier to make. G.Skill TridentZ 4266 CL19-19-19 should be still available at a reasonable price and it will be Samsung but at least my experience is that the same can be found in 3200 14-14-14 or 3600 16-16-16 kits which are cheaper.