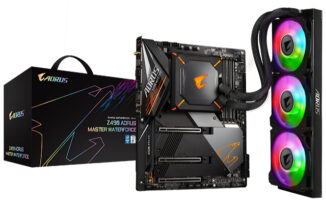 The 10th generation of Intel Core™ processors has been in the market, enhanced by up to 10 cores, 20 threads, and 20 MB total caches, the performance boost with the default TDP ramping up to 125 Watts. The excess heat and TDP also boost especially when overclocking on all cores. Many users choose liquid cooling to effectively dissipate excess heat generated from high-speed operation, and further release the extreme overclocking performance of the processors. However users often hesitate since general AIO liquid cooling cannot cover VRM dissipation, and the monoblock for processor and VRM area of open liquid cooling is always difficult to purchase separately as well as raise the possibility to break the warranty. To provide users a convenient option without breaking the warranty, GIGABYTE released the Z490 AORUS MASTER WATERFORCE motherboard with a whole new design with AIO 360 liquid cooling which can dissipate the heat from the processors and VRM at the same time.

It’s easy to assemble the monoblock of the Z490 AORUS MASTER WATERFORCE motherboard. Users only need to fasten four screws like the general AIO water cooling system to complete the assembly. Enhanced by a direct-touch heatpipe and new generation 7.5 W/mK LAIRD Thermal Conductivity Pad, it increases the contact between the VRM and thermal pad which provides superior heat conduction, dropping 23% heat compared to non-liquid cooling designs. The excess heat generated from the processors and VRM pass to the monoblock, proceeding heat convection through the cooling water and three sets of dual-ball bearing at 120cm, which boost the heat dissipation efficiency. The AORUS Falcon logo with RGB lighting on the monoblock and digital LED lighting on fans enables lighting synchronization with system or peripherals so that users can showcase their own style. With both functionality and style, the metal backplate of AORUS motherboards adds extra sturdiness and rigidity to the motherboard while dissipates heat quickly away from the backside components and the PCB, avoiding system instability caused by overloading.

GIGABYTE Z490 AORUS MASTER WATERFORCE motherboard features a 14-phase digital power design in which each phase can hold up to 90 amps with its Smart Power Stage design, delivering up to 1260 Amps for the best power balance to prevent the processors’ performance drop from VRM overheating. Solid power pin connectors on the addition of Tantalum Polymer capacitors improve the transient response of the VRM between high and low loads to reduce 22% of voltage wave, providing more stable and pure power to enhance the stability of the processor so that users won’t have to worry about overlocking failures caused by unstable power.

Aside from power and thermal management, GIGABYTE Z490 AORUS MASTER WATERFORCE motherboard boasts an impressive memory configuration with single-slot 32GB memory capacity. The PCB’s unique XTREME MEMORY technology with anti-interference design reduces electromagnetic interference, which ensures users’ higher overclocking performance on memory with more stability. The signal stabilizing function of the tantalum Polymer capacitors at the base of the memory slots further enhance the stability of the board especially when overclocking at XMP high frequencies, enabling overclocked RAM performance at DDR4 5000MHz speeds and above according to the test results.

Z490 AORUS MASTER WATERFORCE integrates abundant functions. The board’s Intel® 2.5Gbps Ethernet brings ultra-fast connectivity that is 2.5 faster than Gigabit Ethernet. Also, the board implements an Intel® WiFi 6 802.11ax network adapter and AORUS high-gain WiFi smart antenna to deliver up to 2.4Gbps transmission speed. The ultra-fast Ethernet and WiFi configuration means that users have a flexible configuration with ultra-fast and stable internet connectivity. When it comes to audio, GIGABYTE is always on top of its game. Z490 AORUS MASTER WATERFORCE utilizes the ALC 1220-VB audio engine and pairs it with the WIMA FKP2 studio-grade audio capacitors to deliver studio-grade, high-fidelity audio.

Z490 AORUS MASTER WATERFORCE can easily satisfy users’ need for CPU and VRM heat dissipation, but for those users who chase top-notch and more stylish systems, the flagship motherboard Z490 AORUS XTREME WATERFORCE is highly recommended for an open loop water cooling system. Z490 AORUS XTREME WATERFORCE is based on the Z490 AORUS XTREME, providing extreme power, a memory circuit, and expansion design. Through the AORUS All-In-One Monoblock, the heat from CPU, chipset, and even M.2 SSD can be dissipated at the same time. Enhanced by extra thick 7.5 W/mK LAIRD Thermal Conductivity Pad, the contact between the VRM, chipset, and monoblock are increased, providing superior heat conduction to avoid the instability from the system overloading. Meanwhile the fashionable outlook and embedded dual digital RGB lighting design furnish liquid cooling enthusiasts with the most premium liquid cooling system with a customized style.

Z490 AORUS MASTER WATERFORCE and AORUS XTREME WATERFORCE motherboards also bring back fan-favorite technologies such as RGB Fusion with support for digital lighting strips, Smart Fan 5 Technology, USB TurboCharger for ultra-fast charging on phones, and other technologies. GIGABYTE BIOS has been completely revamped with a new graphical interface that displays key information on clock speeds, memory, storage devices, fan statuses/settings, and other important hardware information in a more intuitive and user-friendly manner. Q-Flash Plus technology allows the user to maintain the system’s BIOS in a USB flash drive without installing a CPU, RAM, GPU, and other peripherals.

Gigabyte has recently announced the Aorus 4k Gaming Monitor that’s console ready. While the press release is geared towards console gamers, there is no reason PC enthusiasts can’t take advantage of a great display. The Gigabyte 4K ranges from 32″ up to 48″ and features up to 144Hz refresh rate and 0.5ms response time, they also take full advantage of the HDMI 2.1 connector’s bandwidth. Pricing and availability are not yet known, though they claim it is currently available. For more information please read Gigabyte’s press release below.

EVGA’s lineup for the Intel Z490 platform consists of the DARK and FTW WiFi. The DARK is tailored for extreme overclockers and serious enthusiasts. However, if you’re after a more conventional, but still feature-rich gaming motherboard, then the FTW is worth taking a look at. Even though the DARK is their flagship motherboard, EVGA hasn’t overlooked the FTW in terms of overclocking support tools and features.