The Inquirer states that there will be dual-core Athlon 64s out in June.

At first impression, this would seem to contradict AMD’s conference call comments and our rather rather stronger assertions that AMD doesn’t really want to do dual-core on the desktop now.

However, look at the pricing of the “regular” dual-core processors (due out around the same time as these A64s), and you’ll see that our comments still hold true and AMD is reviving an old stunt of theirs.

(AMD from link above, Intel prices from here)

The issue is not AMD’s prices for the processors they’re putting out. It’s probably pretty safe to say that the performance order of these seven processors is precisely the same as the pricing order (and Intel’s dual-core EEs are certainly priced stratospherically, too).

No, the key is not what is there, but what is not there: 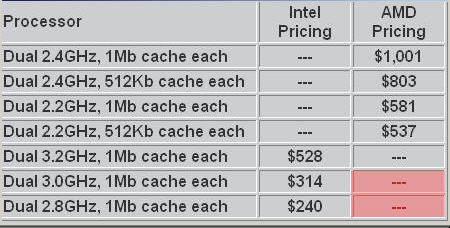 What isn’t there are any lower-speed Athlon 64 duallies to compete against Intel’s. AMD is essentially conceding most of the early dual-core market to Intel.

Those of you who can remember back a couple years might remember that when Athlon 64s first came out, they were also high-end loaded. AMD started at 2GHz, at very high prices, and didn’t release slower ones until long after introduction.

AMD was able to proclaim that they got the product out, but Athlon 64s sales were minimal until AMD eventually released slower processors at much more reasonable prices.

For the life of me, I never saw and still don’t see how not selling processors at prices lower-than-skyhigh but still much higher than those prices AMD was getting from XPs made any financial sense. Unless, of course, AMD simply couldn’t make a whole lot of Hammers.

In the case of the early Athlon 64s, we eventually found out that that was the case.

We come to dual-core, and we see what certainly looks like history repeating itself. AMD is patting itself on the back again for getting out a product out, but pricing it out of the mainstream so they don’t actually have to make very many of them.

It just doesn’t make sense, unless all the history is repeating itself and for whatever reason, AMD again can’t make enough of these things to meet higher demand.

The average person interested in buying an Athlon 64 dual core isn’t making a decision between an Athlon 64 and full-fledged Opteron system. He’s deciding between a desktop single or a dual core, hoping a dual core will get him more for his money. To oversimplify, the question is, “Do I lay out $150 or $200 for a single, or stretch to $300 for a dually?”

If you tell such a person, “$500 minimum to play,” the vast majority won’t lay out more to play, they’ll just wait until the play price drops. Some will go play with Intel instead.

In contrast, Intel will have the EEs for those few who want to pay a lot, and the regulars for everyone else. They obviously aren’t terrified of losing EE or Xeon sales with their cheaper duallies.

So why is AMD?

It is becoming increasingly clear that come June/July, AM2 is not going to match Conroe. Will it also be true that, as the website that did the review said, “all Intel has to do is execute Conroe on schedule, delivering

We Have Met The Enemy And He Is Us

I have a friend. He’s a coffee salesman. On September 11, he drove around doing his job while the New York skyline changed by the hour. I actually drove around with him towards the end of that day for a