(Ed. Note: This article talks not only about the 1.6A Northwood, but also compares
the performance of three heatsinks–Ed).

This week, my Northwood 1.6 GHz arrived. Here in Germany, they are
hard to get and I paid a bit more than I had wished.

Many overclockers
are interested in the low speed Northwood CPUs, because they are cheap
and have good overclocking potential (0,13µm Core, low heat dissipation…).
A few have been saying the P4 1.6A could be the next Celeron 300A. I say: This could
be true 🙂

The CPU is a Pentium 4 1.6A GHz with 512 kB cache (SL668 from Malaysia),
which came to me as a boxed version. The test mainboard from a company called Enmic
is an Enmic 4BCX+ [ED Note: EPOX tells me this is an an EPoX 4BDA2+ rebadged for the German market].

The heatsinks I used with this CPU are
a Neolec Northstar 478
(thanks to Neolec!), a Thermaltake
Volcano 478 (thanks to frozen-silicon!)
and a Intel in-a-Box HSF.

Here are a few pics showing the boxed CPU (pics taken with a Logitech
Quickcam Web): 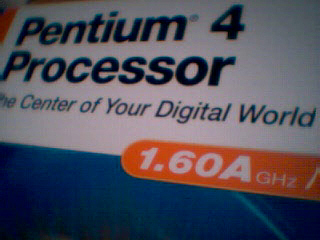 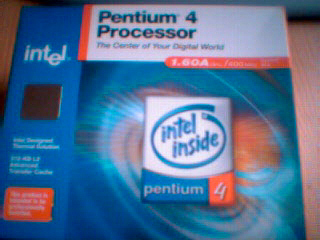 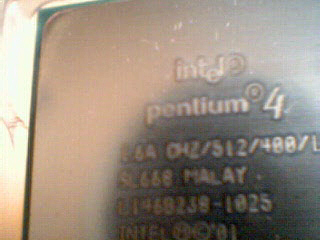 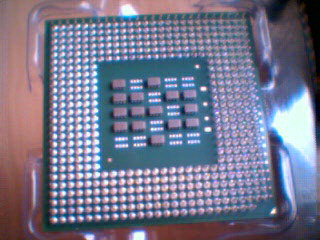 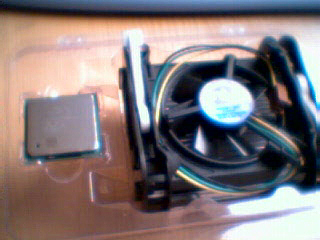 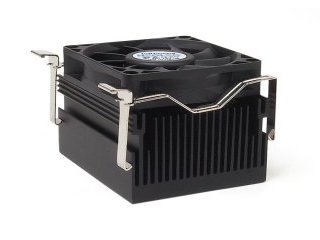 The surface of the heatsink’s bottom is pretty rough. It comes
with some pre-installed thermal paste. I removed the paste and took a pic
(see above). Lapping it a bit won’t hurt. 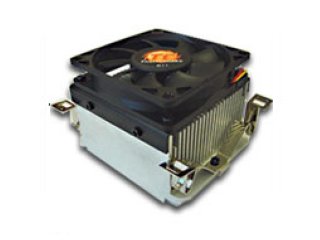 The Volcano 478’s bottom surface is a bit finer compared to the
Northstar. It comes with a pre-installed phase-change interface material
(TIM).

Removing the TIM is pretty easy. Installing and uninstalling the heatsink is very
hard. This is primarily caused by the clip; you need much more force on it than with Neolec’s clip.

I can´t present you pictures from the bottom´s surface. Intel´s TIM was so hard to remove, I made some scratches in it. (I lapped it after that, but the lapped result wouldn´t be representative).

The bottom of the heatsink is very thick above the important areas (where the P4 Heatspreader sits..). The fan is really quiet (with my 2 7200 rpm harddisks, I can´t hear it anymore). It runs at 3200 rpm and the size could be compared to 60*60*15 mm fan.

The clipping mechanism develops pretty big forces, be careful not to break something. Removing the the heatsink is easy.

With the values (i´m not talking about Thermal Design Power, but
real max. power dissipation!), i had from Pentium 4 2A GHz, i started to
calculate…and came to the result, that the real maximum power dissipation
(BurnP6 should get the CPU into this area..) should be at around 105 Watt
for my Pentium 4 @ 2.32 GHz and 1.75 Volt.

My C/W results seem to be about right, since Intel rates its
in-a-box HSF at 0.43 C/W…i used Arctic Silver 2 (thanks to Adrian
Wnek) instead of the pre-installed interface materials, so my results
should be okay.

(Ed.note: If you’re wondering about these measurements a bit, keep in mind that raising voltage from 1.5 to 1.75V all by itself increases wattage 36%. Also keep in mind this are CPU-Diode temperatures from inside the CPU, not measurements on the surface or the back of the CPU). Nonetheless, it’s getting toasty in there.

Even if the wattage numbers aren’t exactly right, throwing a lot of voltage at one of these Northwoods cranks up the wattage to AMD levels. While Intel has made more provision for this than AMD (heatspreaders, functional thermal throttling and shutdowns), it seems likely that at least later generations of overclocked Northwood will require AMD-style cooling.)–Ed

I used the above system (memory at CL2) and tried to find the maximum
of my board / memory / cpu. Here is the highest speed, I could reach (I
used the Thermaltake Volcano 478 for this experiment):

Here are the Sandra 2001 scores at this speed:

Here is the SuperPi score for 1 MB at this speed:

That’s it. I hope you enjoyed my trip and it was helpful to you. I think
that an overclocked P4 1,6A has a good price/performance ratio. I thought I could get more out of it, but a 50%, 800 MHz overclock isn’t exactly shabby.:)

Synchronized voltages?  We think not.

Overclocking the retail version to the mid-1600s. — Joe.


The Removal of a P4 Integrated Heat Spreader

Also shows how much the temp improves – Cody Stasyk