SUMMARY: Expect about half the fan’s rated free flow through a radiator due to its resistance.

After I wrote about Measuring Airflow Resistance, I received requests to take a look at air flow resistance through radiators. Not a bad idea, so I did some testing on a few radiators to find out how much airflow does get through.

For this test, I tested three radiators: 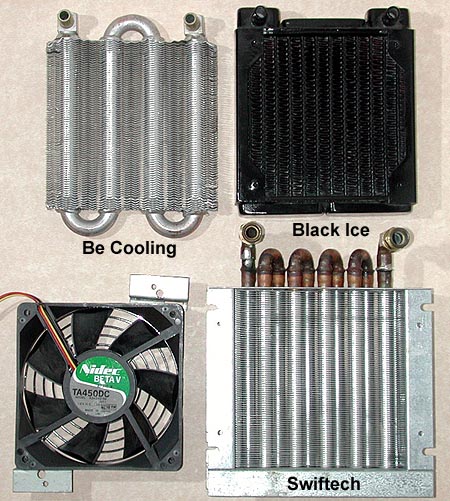 These may not be the most current models, but I picked them as representative of three different types.

The radiators were mounted on the flow chamber and system resistance was measured. As an example of what a 120 mm fan would do when attached to these radiators, I used a 120 mm Nidec Beta V TA450DC, Model A34346-58, rated at 92 cfm @ 2550 rpm, and measured it and its flow through the radiators: 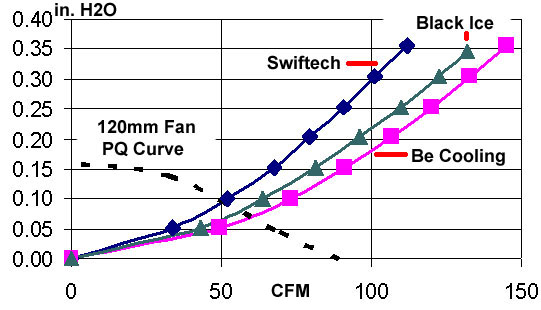 As the radiators’ system resistance curves show, it takes a LOT of pressure to get a LOT of airflow through these radiators. Mounting a 92 cfm fan on a radiator does not mean you’ll get anywhere near 92 cfm through it – more like 50-60%.

To determine what to expect from a particular fan with these radiators, you plot the fan’s PQ curve onto the system resistance curves – where it intersects tells you how many cfms will get through. In this case, the Nidec was tested on the airflow chamber and its PQ curve was plotted (note: This data is also available from the manufacturer) – this is the black dashed line in the chart above.

As a final test, the Nidec was mounted on each radiator and its flow determined through each, with the following results:

The Swiftech and Black Ice are about as expected, but wait a sec: Based on the graph, the BE Cooling radiator should show MORE airflow than the others (less system resistance) – so how come it tested LESS than the Black Ice?

When I first saw this, I thought maybe there was a slip up in transcribing results. Back the next day to re-test and make sure what was what. No problems there – so what gives?

Then it hit me – the Swiftech and Black Ice radiators use a plenum and the BE Cooling does not – the fan was mounted right on top of its fins. This caused interference with the fan blades, thereby lessening flow compared to the other two radiators.

One aspect of picking a radiator for a watercooling system is the amount of airflow through it. The “denser” the radiator, the less air gets through. In addition, a radiator with a plenum for the fan is more likely to yield better flow than directly mounting a fan on its fins.