Scythe has long been an everyday name in the PC cooling market with their various heatsinks and fans throughout the years. Today, we have a revised version of Scythe’s Mugen 5 CPU heatsink sporting compatibility with most current CPU sockets from Intel and AMD. The Mugen 5 is a typical single-tower style heatsink with one fin stack, as opposed to their dual tower FUMA heatsink or much more massive Ninja 5 heatsink.

* Please note that an original backplate with screw mounting is needed for installation on motherboards with AMD sockets. Please check before buying if the backplate is fixed by screws or plastic pins! If the backplate uses plastic pins, mounting this cooler is not possible.

Scythe’s packaging is always full of information for potential buyers giving them everything they need to know to determine if the heatsink is the right buy. On that front, there is an excellent isometric picture of the Mugen 5 with the Kaze Flex installed. Of course, Scythe’s logo is in the top right and compatibility is listed here as well. On one side, we have detailed specifications and dimensions for the heatsink and fan. The other side highlights four features, including the asymmetrical design, Kaze Flex fan, H.P.M.S. II mounting system, and the ability to mount two fans.

Opening the box reveals the partially foam-wrapped Mugen 5, the Kaze Flex 120 fan, and the box of accessories.

The accessory box includes an installation manual, hardware bag, and a long screwdriver. The screwdriver is a nice touch, as I’m sure anyone can appreciate not having to find one off-hand or even buy one just to install the heatsink. The bag has a tube of thermal paste, backplate, Intel/AMD brackets, press-fit spacers, screws, and two sets of fan clips for those wanting to install an additional fan.

The fan included with the Mugen 5 is a PWM version of the Kaze Flex 120. This fan runs up to 1,200 RPM and consumes 1.56 W of power. As far as looks go, it has a black frame with gray blades which will blend in with the majority of builds. The gray corners on the fan are rubber which to minimizes or even eliminates any vibrations that could occur while the fan is in operation.

The Mugen 5 s made from aluminum and nickel-plated copper which gives it a uniform metallic finish. here are six heat pipes forming a u-shape through the base with the ends capped off on top of the heatsink. The fin stack has 39 fins with a density of around 10 fins per inch, so there’s plenty of room for airflow across the heatsink. We can also make out some of the asymmetrical design and notched bottom edge, but we’ll get a good side shot in a bit.

Here are the same isometric shots, but with the Kaze Flex 120 installed. We can see the fan clips are attached to the fan’s outermost mounting holes, which means only 25 mm thick fans can be used with these clips. However, clips that attach to the innermost fan mounting holes would allow for fans of any thickness, providing nice flexibility in fan use.

With a true side view of the Mugen 5, the asymmetrical design can be seen in more detail. The heat pipes bend towards one side placing the fin stack off-center of the base. This, along with the notched bottom edge, allows for better memory compatibility and easier access to the DIMMs.

On the top, we have the 12 heat pipe end caps, two holes, and the Scythe logo. The two holes in the top of the heatsink allow the included screwdriver access to a couple of the screws on the mounting crossbar.

The base is nickel-plated copper just as the heat pipes, and is very close to a mirror finish.

Now, we’ll go through a mock installation to show all the steps involved when mounting the Mugen 5. The first step is to mount the backplate onto the motherboard with four thumbscrews. You’ll need access to both sides of the motherboard simultaneously to hold the backplate in place while securing the thumbscrews. They can then be tightened down with the included screwdriver.

Once the backplate has been installed, the cross braces are secured with four screws and the included screwdriver.

The next step is to apply thermal paste to the CPU, and Scythe kindly includes a tube of paste for those who may not have any. I personally use the “dot” method of applying thermal paste by using a blob of paste the size of a small pea or so in the center of the CPU and let the pressure of the heatsink spread the paste across the CPU. Once the paste is applied, we can mount the Mugen 5 by using the screwdriver and alternating between screws every few turns to apply pressure as evenly as possible until the heatsink is securely mounted.

The final step is to install the Kaze Flex 120 on whichever side of the heatsink you prefer and is best for your system. Remember, Scythe included a second set of fan clips to install fans on both sides of the Mugen 5 for a push/pull configuration if so desired.

Performance lands in the expected range with the other two single-tower heatsinks, a Dark Rock 3 and Venomous X. Looking at the middle-of-the-road Vcore (1.225 V), all three single-tower heatsinks have virtually identical performance. The dual-tower coolers, FUMA and NH-D14, have some separation; followed by the liquid coolers forming even more separation from the pack.

When looking at the high Vcore range all of the air coolers’ performance plots are more grouped, and the liquid coolers retain their performance keeping their plots separated from the rest. 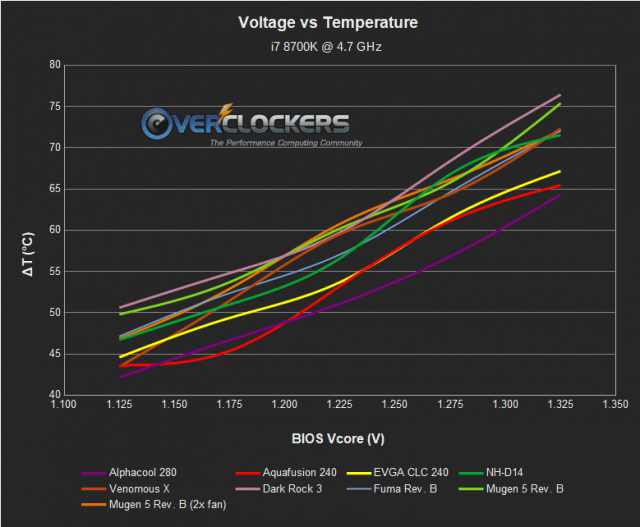 The Mugen 5 has a very good showing in the noise department due to the 1,200 RPM Kaze Flex fan(s). The only heatsink with lower noise in my testbed is the Venomous X paired with a 1,850 RPM Scythe Gentle Typhoon fan (with 25 mm shroud). So, there’s definitely headroom to add beefier fans for better performance while still keeping the noise level low. So, the three plots with the lowest SPL all include Scythe products. 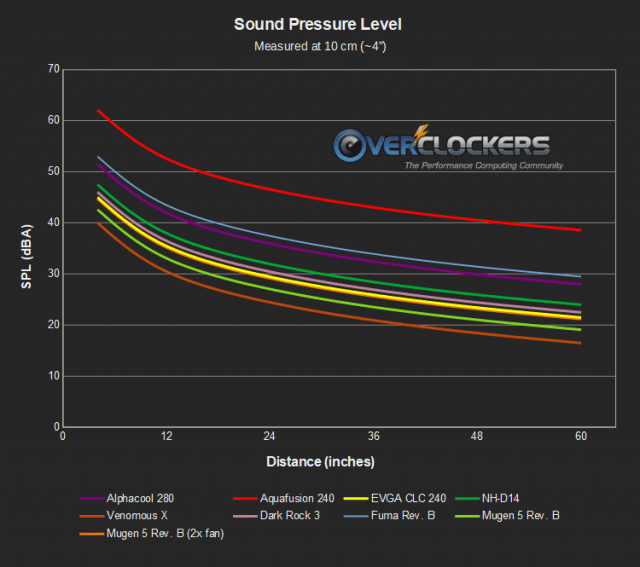 Scythe’s Mugen 5 Rev. B is a good looking cooler with a bare metal aesthetic that goes well with any theme. Capped heat pipes and a subtle Scythe logo on the top fin cleans it up nicely.

A few details about the Mugen 5 that I can appreciate is (1) the asymmetrical design along with a notches bottom edge to allow for great RAM support and access, (2) the included long screwdriver so that’s not something the customer has to worry about after purchase, and (3) the inclusion of the second set of fan clips for those who want to run a push/pull fan setup.

The included Kaze Flex fan runs at a rather low RPM of 1,200, however, this results in superb noise levels. The Kaze Flex also has the benefit of rubber corners to allow isolation which prevents any vibrations at the contact point between the fan and heatsink.

Performance-wise, the Mugen 5 remains neck-and-neck with the other single-tower heatsinks while also being one of the quietest coolers in my entire testbed. The Mugen 5 Rev. B comes in at $48.99 on Amazon, which seems around the standard price for good heatsinks nowadays.

Overall, there’s not a real downside to the Mugen 5, just a ton of pros: Good price, decent performance, fantastic noise level, wide-ranging RAM support, and the list goes on.

The Transformer 4 is the first heatsink I have tested from Evercool. It seems like their high-end offering with four heatpipes and two fans for a push-pull setup. This conventional tower style heatsink sounds like it might have what it takes to be a killer cooling solution.

Noctua has released its NH-D15S to stand alongside its NH-D15. The NH-D15 is a huge heatsink, a full 15cm wide. The NH-D15S looks like the D15’s twin, also 15cm wide. Where do the two differ? The NH-D15S is moved over to make more room for the first PCIe slot, and it comes with one fan, not two – this keeps the price down.

Coming in swiftly behind big brother we have Ryzen 5. This is AMD’s offering for the more budget-minded PC user. Today we’ll be looking at the hex-core 1600X and the quad-core 1500X. These CPUs both have the XFR technology we’ve seen from the Ryzen 7 1800X and 1700X allowing for boost speeds over their typical max. Without further adieu, on to the main show.

Scythe's Mugen 5 Rev. B CPU heatsink sports compatibility with all current CPU sockets from Intel and AMD. The Mugen 5 is a typical single-tower style heatsink with one fin stack, as opposed to their dual tower FUMA heatsink or much larger Ninja 5 heatsink.