I own one of those weird 3Dlabs Oxygen VX1-1600SW cards. It came with my
Silicon Graphics 1600SW flatpanel. The TFT screen, no longer produced by
SGI, is a beauty, but the companion 3Dlabs card a beast. Not in terms of
speed or high driver maintenance, it’s just LOUD.

Later productions of the
flatpanel came with a Number Nine Revolution IV card, but mine came with this
3Dlabs thingy. It has, or should I spill the beans and say ‘had’, a Sunon
50mm x 50mm x 10mm Super Thin CPU Cooler installed. Unfortunately it’s noise
characteristics are not on Sidewinder Computers excellent listening room
page (HERE), but I assure you it’s
noisy. 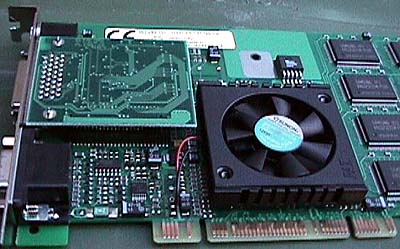 Maybe it has something to do with the fan hanging upside down in my
HP Pavilion case, or a manufacturing glitch. Anyways, after browsing
Overclocker.com’s Video Card Cooling and Performance section, I decided
enough was enough. It had to go – especially since the Sunon fan is a 5 volt
type, so no tweaking to 7 volts available here. 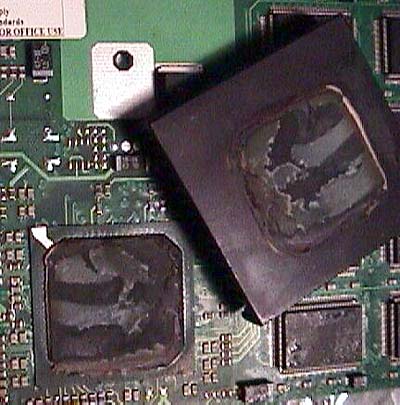 One of the tips I found on Overclockers was the idea from
Asiz Rizvi to stick
your video card in the freezer. I placed the card in an anti-static bag and
let it sit in the freezer for some twenty minutes. The Sunon CPU cooler then
came off without applying to much pressure with a knife I tucked between the
heatsink and the video board. 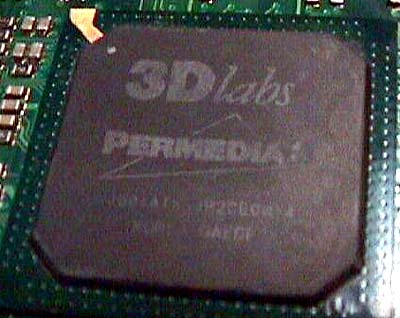 Some of the epoxy was attached to the stock
heatsink, and some of it still attached to the GPU. The same trusty knife
was used to scrape that junk of the chipset. Tedious, but necessary for the
next phase: A tight fit with a Thermaltake Blue Orb. 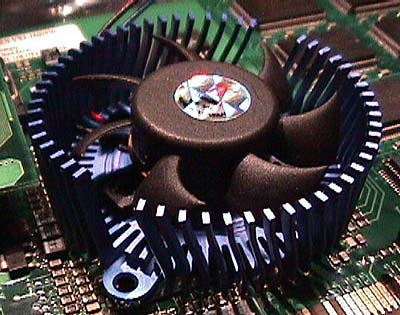 The original fan gets its five volts from the videocard itself. There’s two
wires soldered on both sides of the card. It’s a great help if you own one
of those tin sucking gizmo’s if you want to remove the wires cleanly with a
soldering iron. You might clip these wires as well, but I’m not too fond of
loose wires in my computer case.

There are no holes available in the videocard for fastening the Thermaltake
Blue Orb, but the set comes complete with thermal double side tape as well
as thermal grease and push pins. Since taping is the only available option
to go here, you don’t need the thermal grease. I cleaned the GPU with some
alcohol and Q-tips before applying the tape on the chipset.

I rubbed it on
quite firmly using my nail, removed the second protective coat and tucked
the Orb nicely on top of the chip. Now I just pray it does not fall off…
It’s hanging upside down, remember? The Blue Orb is 15 mm high, so the
complete piggybacked set totals to a height of about 21 mm (0.8 inch).

Am I happy now?

Well, yes and no. As I said, my main motivation for this project was
quietness. My 3Dlabs card is cool and quiet now, but there’s more buzzing
and whirling in this HP Pavilion 9710 case. I wonder what my next project
will be. I reckon the CPU cooler gotta’ go.

Joe: When I received the GeForce2 MX from NATA Computers, the video out adapter was not an RCA plug; Jim figured out how to adapt the plug shipped with the card to change it to an RCA plug: Here is

Disabling AGP Sidebanding With VIA Chipsets