One of the aspects that makes AMD’s X570 platform great is the implementation of a fourth-generation M.2 storage interface. Today we’re looking at an NVMe drive from Silicon Power which has been specifically designed to harness the power of the PCIe Gen 4×4. Silicon Power recently introduced the US70 to retail markets which boasts sequential read and write up to 5,000 / 4,400 MB/s. We got our hands on this new drive so follow along as we evaluate its performance and see what makes it so special.

Founded in 2003 by data storage experts in the industry, Silicon Power is relatively new to the memory world. They’ve made a name for themselves by offering excellent products with a very strong price/performance ratio on DDR4, internal computer storage, and portable storage solutions. The new US70 NVMe drive is a high-end offering from the company that’s pushing hard performance numbers with competitive pricing per gigabyte.

Fast is an understatement. The US70 is nearly 10 times faster than traditional SATA III SSDs. The incredible speed is achieved primarily through the use of the Phison PS5016-E16-32 PCIe 4.0 controller. The PS5016-E16 series controller packs amazing speed capabilities and a host of features including compatibility for up to 8 TB of storage.

NAND flash memory has a finite number of read and write operations that can occur before the drive becomes unusable. This finite number is defined as the TBW value, or total bytes written. Silicon Power specifics an impressive TBW value for the US70. The 1 TB drive has a TBW value of 1,800 TB, with 3,600 TB for the 2 TB drive which is about par for the course.

On the front, we have a high-quality image of the drive and the product branding info. On the backside, we get bombarded with info and details in multiple languages. Realistically the back of the box doesn’t provide much useful information. They could have used this space to tout the impressive performance specifications or highlight some of the Generation 4 features.

Inside the box, the drive is safely tucked away in a plastic insert. This appears to be a sturdy and effective way to package the drive. The packaging is fairly straightforward, but it doesn’t come across as cheap or inadequate. There are no product manuals or other accessories inside the box. 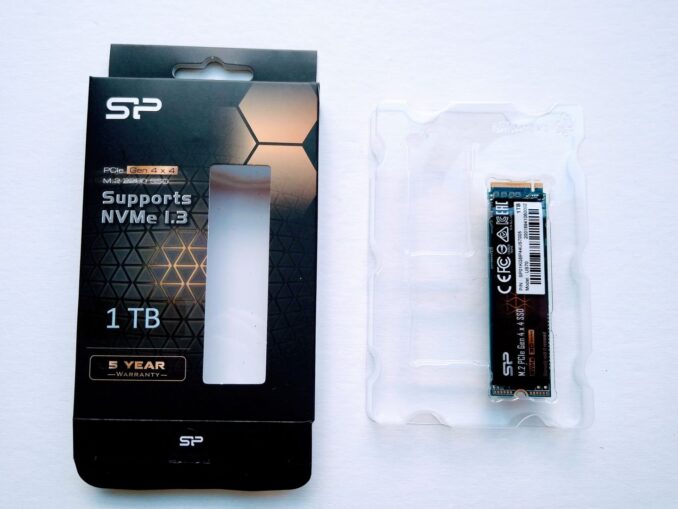 Out of the package, we get our first glimpse of the drive. There are IC’s on both sides with a sticker on top. The sticker is very thin and won’t be a problem should you choose to use the integrated motherboard heat sink or an aftermarket cooler.

There is no anti-tamper mechanism, but the sticker does indicate that the warranty will be voided if removed. With the sticker out of the way, we can get a better look at the hardware. There is one main controller, two DRAM cache ICs, and a total of four 3D NAND flash ICs. We knew what the controller was in theory, but here we get hard proof of its implementation. This is currently the only generation 4 NVMe controller available on the market today.

The SP Toolbox from Silicon Power is designed to be the companion software for their solid-state drives. It provides useful information and tools to keep the drive running healthy and efficient. 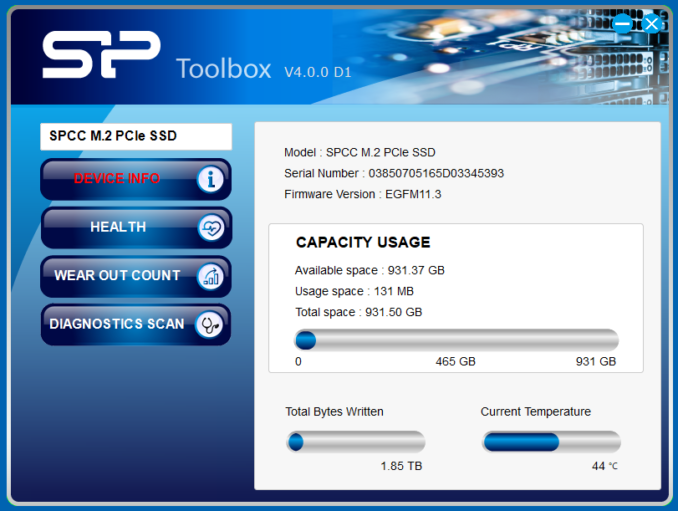 We know what some of the performance specs are on paper, but how does it actually perform in real-world tests? To answer that we’re going to put both drives through the gamut of benchmark programs to evaluate the relative performance. In between each major benchmark phase, the drive will be sanitized from the motherboard bios and formatted to NTFS with default settings under Windows 10.

With a naked drive and no cooling at all, there was no thermal throttling observed, even running the benchmarks back-to-back to simulate a worst-case scenario. All benchmark results and stress testing with done in an open-air test bench with no fans or direct airflow.

All tests will be performed with the US70 installed in the top M.2 slot to utilize the direct CPU interface. 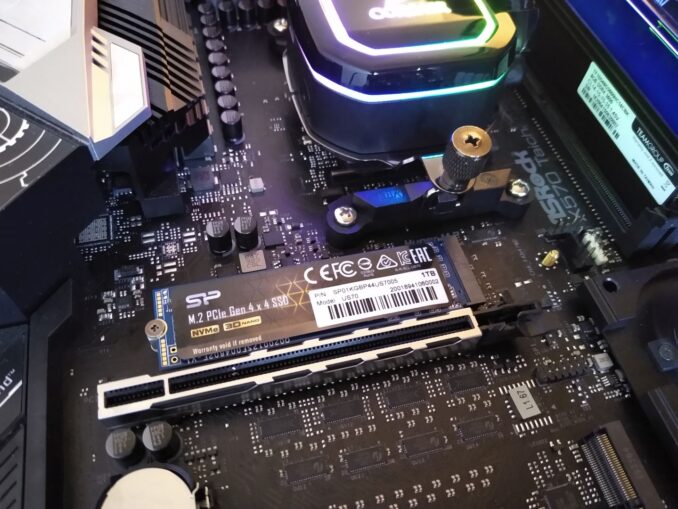 We’re going to be a little unfair here and compare the Silicon Power US70 to a variety of Gen 3.0 NVMe SSDs. We’re treating the performance results as a ‘first look’ because we haven’t reviewed any other Gen 4.0 drives at this point. 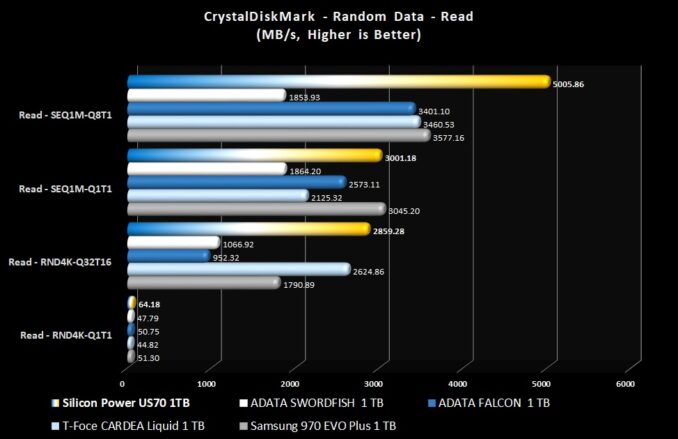 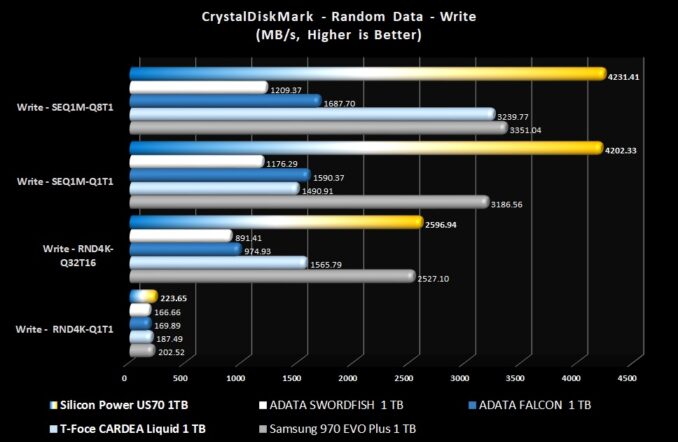 We knew it was going to be fast, but seeing the ranked performance against some of the best Gen 3 NVMe drives is impressive, to say the least. The Samsung 970 EVO Plus is one of the top-performing Gen 3 drives ever released. The US70 really shines at the sequential write, however, the random write tests are not as outstanding as we might have expected. In the SEQ1M-Q1T1 read test, our US70 result came in just a few MB/s below the 970 EVO Plus. 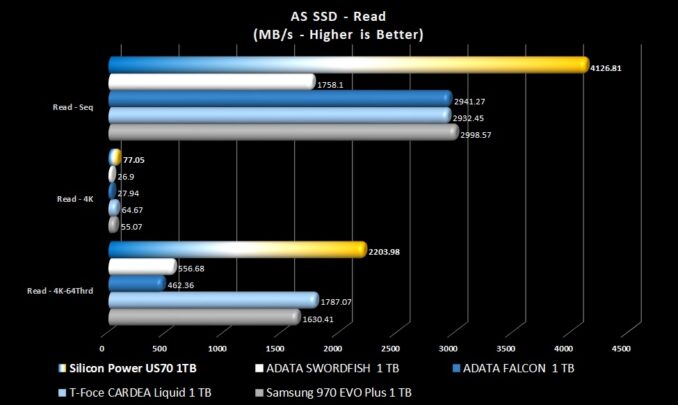 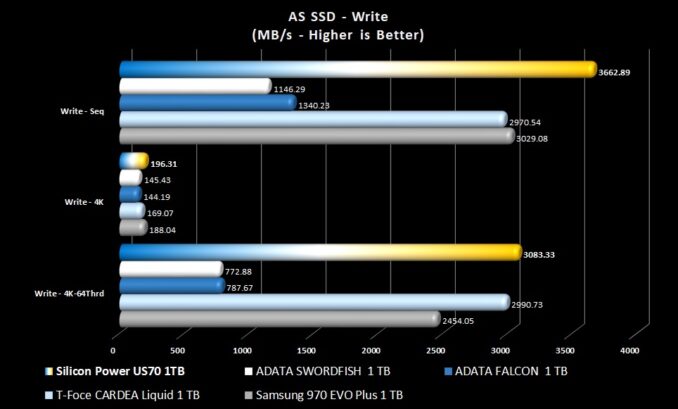 As expected, the read performance in AS SSD was exceptionally high, and a clear winner when compared to the other drives in our test group. The sequential write performance is just amazing, nothing even comes close. However, in the random write test, a few of the high-tier Gen 3 drives are getting very close to the US70 drive perfomance. 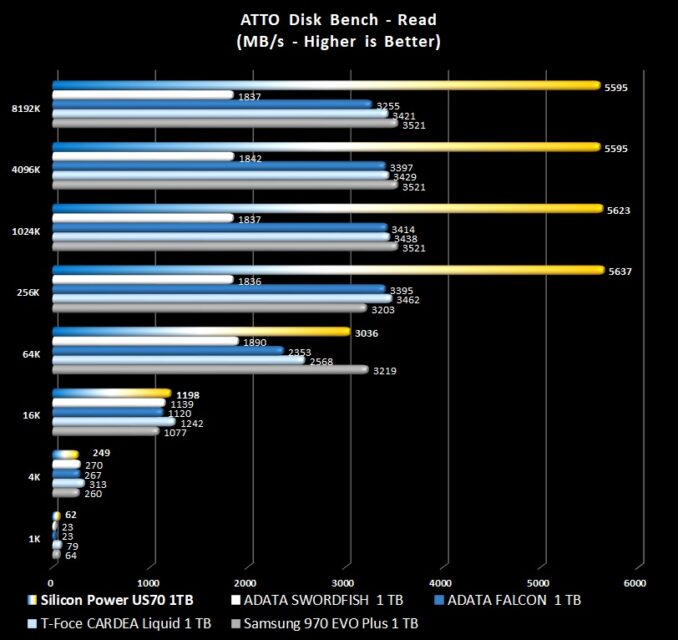 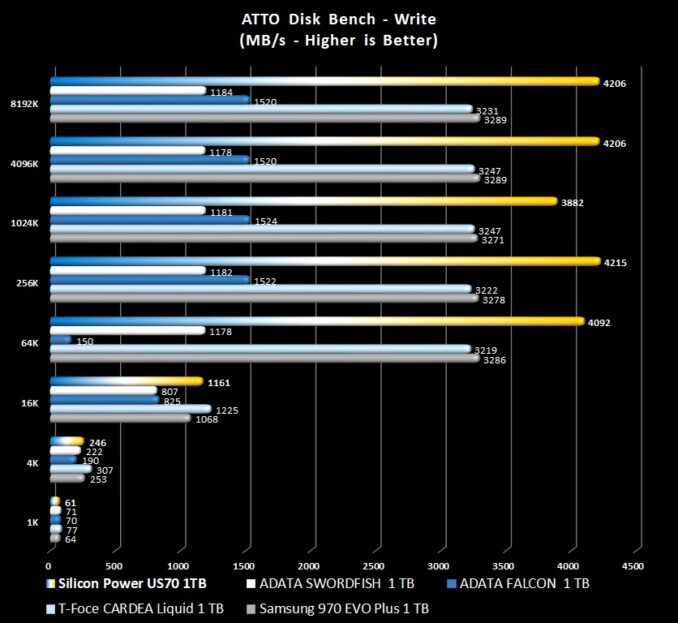 Across the board, the US70 Gen 4 drive simply dominated the field. In the read tests, it was nearly twice as fast as the top-tier Samsung 970 EVO Plus. Compared to the midrange ADATA Swordfish drive, it was officially three times faster. While the write tests are not quite as impressive, they still clearly show the raw potential of this drive.

In an effort to be as thorough as possible we will use a K-Type thermal probe and a Fluke F51-II digital thermometer for temperature readings. The thermal probe has been taped to the actual drive with Kapton tape and we tried to center the probe as close to the controller as possible. 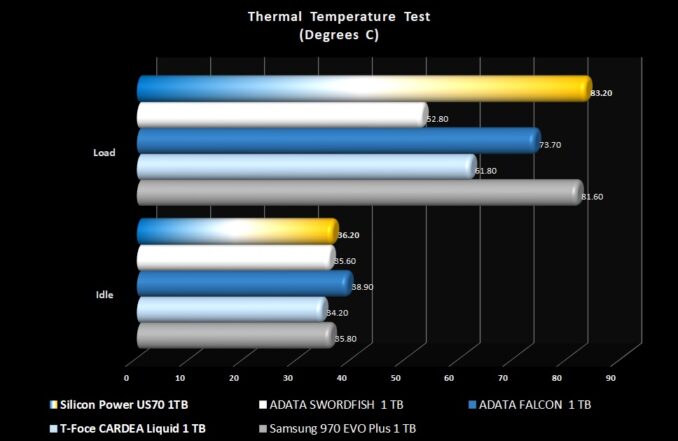 There is no doubt that this drive produces serious heat. With our stress test of five CrystalDiskMark loops, we didn’t notice any throttling in our open-air test. However, we can envision special circumstances that might lead to throttling. If a hot graphics card was placed above the SSD, the situation would have been notably different.

Just out of curiosity, we wanted to see how the drive performed with the ASRock X570 Taichi M.2 integrated heat sink attached. In that test, we observed a maximum drive temperature of 56 °C. While operating temperatures are within operating range,  we certainly recommend the use of a heat sink with this particular drive. 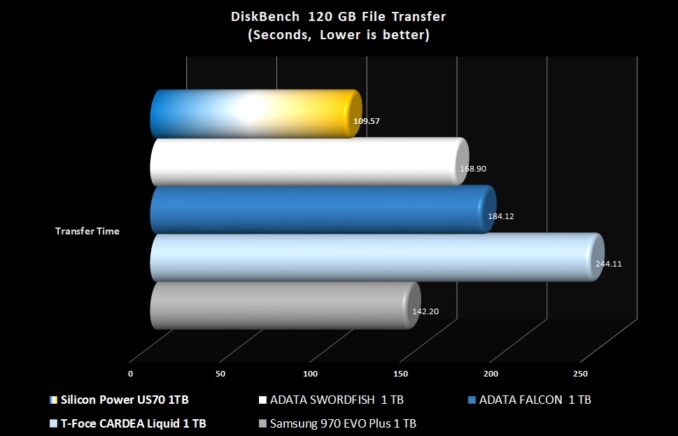 The US70 was about 23% faster in the file transfer test than the Samsung 970 EVO Plus. When compared to the midrange, ADATA Falcon, it was about 40% faster. 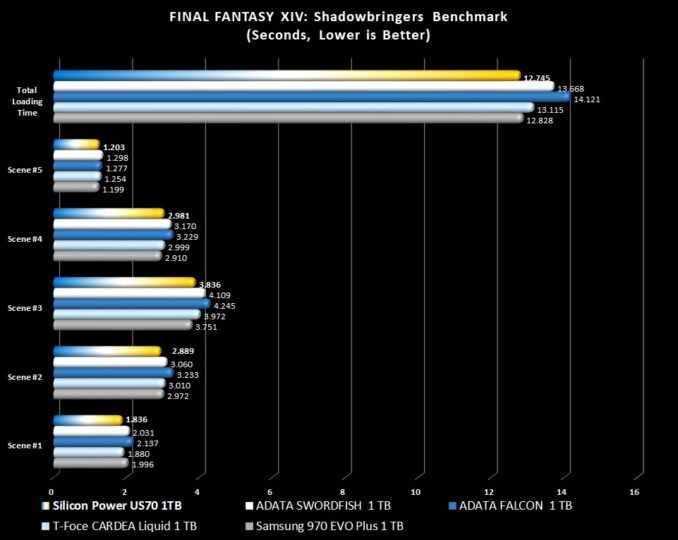 We’ve seen the US70 absolutely crush the best of Gen 3 NVMe 1.3 drives in synthetic benchmarks, but what does it mean for the average gamer? Here we can see that it doesn’t really provide any benefit for game loading times, at least in the Final Fantasy benchmark. While it did technically win the total loading time calculation, we can clearly see it’s not going to be the new ‘must-have’ technology for gamers. 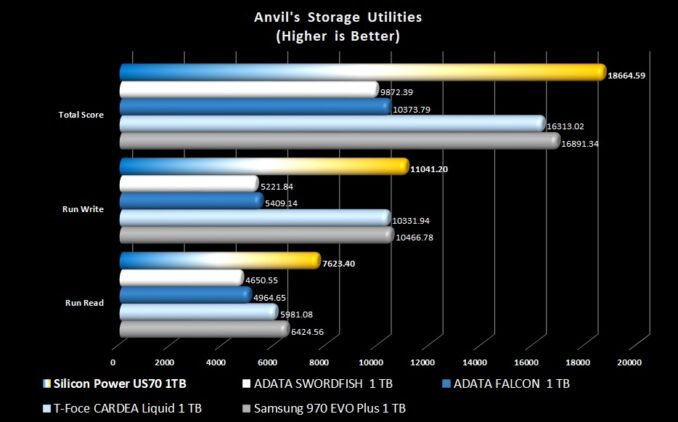 The results attained by Anvil’s utility is really quite revealing. We’ve seen the trend developing in other benchmarks, but this one sums it up nicely.

Our first look at PCI-Express 4.0 NVMe SSD technology leaves us feeling excited. By harnessing the raw potential of Phison’s PS5016-E16-32 controller, the US70 boasts truly impressive performance numbers for synthetic benchmarks and easily defeated our top-tier PCI-Express 3.0 drives. To protect your data, and keep it running safely for years to come, the drive includes the latest features such as bad block management, over-provisioning, and SLC caching with DRAM cache buffer. The US70 has an impressive TBW value of 1,800 TB, so you won’t need to worry about long-term endurance. Silicon Power chose to omit a costly heat sink and therefore reduce costs. We feel this is a wise decision because most buyers would likely opt to use the motherboard’s integrated heat sink for a seamless look and installation.

While generation 4 appears to have bridged the gap somewhat between read/write speeds, the read performance is still better than write performance, respectively. Although it’s undeniably fast, our real-world tests showed that it won’t help much for daily tasks. The average gamer or power user might not benefit much from the additional drive speed for daily tasks. The ideal use case for this drive technology are users who handle large data files on a regular basis.

Crucial’s M4 SSDs are popular amongst computing enthusiasts, so we’ve put the 256 GB model to the test….

Any feeling for why there is such a gulf between synthetic benchmarks and (arguably a much smaller number of) 'real-world use' cases?

In synthetic benchmarks is usually sequential bandwidth so you get that 3-5GB/s. Most daily operations are random where you can expect anything between ~50-500MB/s. If you look at benchmarks like CrystalDiskMark then the most important is random read and usually in lower queues (high are more for databases). Write is usually cached and the write itself is fast enough so you can't see any significant difference during work.

In benchmarks like PCMark 8 or 10, you can see about 200-700MB/s bandwidth but these benchmarks are based on popular applications.
There are no PCMark results in the review so here are some of my results made on the US70 and ASRock B550 PG Velocita motherboard.

also CDM as I was able to reach 5.6GB/s on this drive