Okay folks, I have seen and read all the articles on keeping an overclocked processor cool. I have an AMD Athlon 500 that I am now running over 700 MHZ. What’s the big fuss over keeping it cool with oversized heat sinks and peltiers and heat exchangers and whatever’s out there now to keep this buzzard chilly?

Don’t get me wrong, I know that this is a challenge that has to be dealt with for everyone that has a processor whizzing along where it wasn’t really meant to be. This old Kentucky Hillbilly thought about things, read a lot and, by my youngest son’s constant updates of his reading and knowledge, came up with a real sophisticated plan that seemed in my mind that was worth a try. 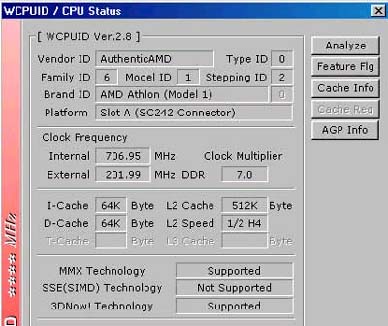 Now for the temperature, which I have monitored for over a year now.

I have read that temps over 100 F are not uncommon for my processor. When I bought it, of course I bought the oversized heat sink and twin ball bearing fans in order to get the 3-year warranty. A lot of good that did me; we (my son and I) cracked open the processor after he purchased me the Golden Fingers for my birthday.

I had it running higher than what it is now, but I was having to boot off a floppy in order to change my L2 cache speed; I didn’t like the idea of having a power failure and it trying to reboot without me being there. It had a tendency to get those puppies a little warm, and I would have to wait on them to cool before starting back up.

Now for the hillbilly ingenuity. First let me show you my temperature in Fahrenheit (I never did like that Celsius thing): 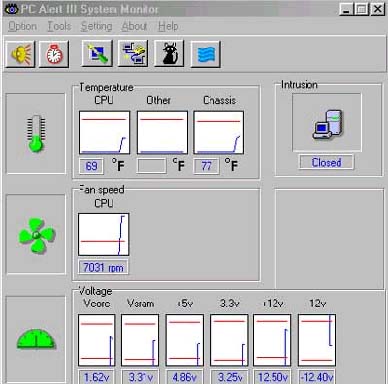 Let me say that my house temperature runs around 70 to 75 degrees year round. I live in Tennessee now, so the temps run from a low of 10 to a high of 95 degrees throughout the year. I live in a simple ranch style house with a ‘crawl space’. I figured that this area under my house has to stay a little cooler than outside in the summer and a little warmer in the winter.

I promptly decided that cutting a hole in my floor beats paying a lot of money for all these new fangled devices that are out there.

I built a wooden box to hold a 6-inch fan, CFM is unknown. I made it so that I could take an ordinary heating/cooling air filter that I have on hand and cut it to the right size to make a filter which keeps out all the creepy crawlies that might me lurking under my floor.

Then I attached (now don’t get all tore up over this) a plastic container that once held some cake icing, cut the bottom out of it, inserted it into the hole as a way to fasten my tubing. I then took an old dryer vent hose that I had meant to dispose of years ago, dusted it off and cut to the right length. I attached a clamp around the hose to the cake icing thing and then I had a problem.

How to hold this thing in place next to my processor? Well, good old masking tape works wonders. It doesn’t look too modern or fancy, but it works! Price of this project? Absolutely zip, nothing, nil!! The fan was given to me and the rest of the junk I had lying around. Oh yeah, I have pictures. 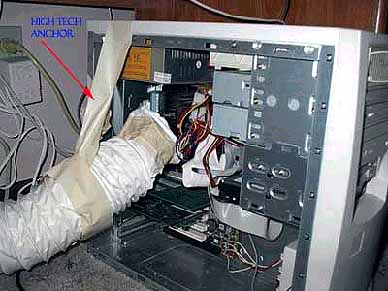 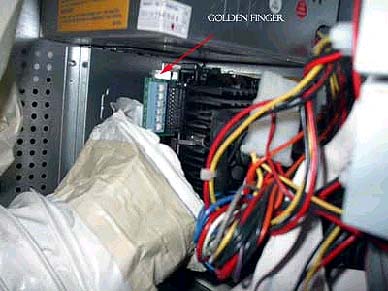 I am not making fun of all the persons who are coming up with ways to cool processors. I am just showing you that there are simple ways of doing this and I realize that everyone doesn’t have the ‘crawl space cooling’ that I have. I was tempted to run a pipe outside from under the floor, but condensation was a worry. My crawl space is very dry and doesn’t collect moisture, so I have left it as is.

One thing I must warn anyone if they try this: If you are out in the country or even in the city were critters abound, make sure that all entrances to your crawl space are kept to a minimum or none at all, except where you have to get in. I had a skunk on several occasions gain entry, via a loose vent, that apparently got angry/excited/lustful and showed me who was in charge under there.

Needless to say, his aroma permeated my house through my pipe. If anyone has knowledge of expunging the odor of a skunk, write me, please. Washing the interior of my house in tomato juice just ain’t going to cut it! Email me and sling all your insults at me. I welcome any and all comments.

Received the case 4/17: FIRST PICS HERE… Joe Review 4/7/01: Just got back from day one of Comdex Chicago, a show more notable for who wasn’t there than who was (no Microsoft, AMD, Intel, IBM etc.). Pickings were slim for

Still lots of life in this “dated” heatsink. — Joe