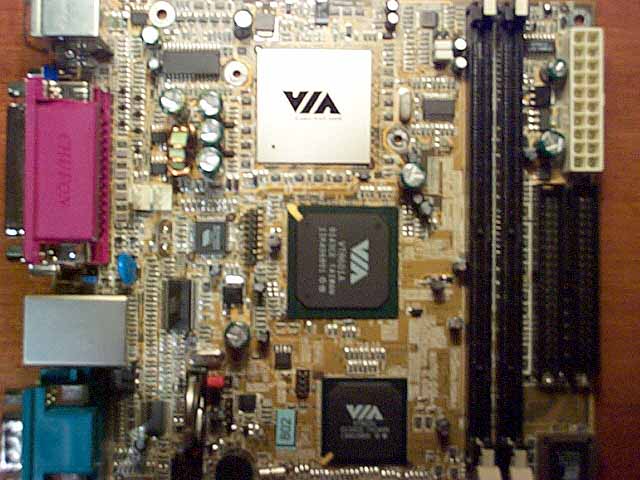 The idea sparked in my head about three years ago, when it became clear that the DVD format had been accepted by the masses. Digital video was now a reality for almost everyone. Add to that the ever growing popularity of digital music, which started with the CD-Audio more than 15 years ago, and now with the MP3 and other formats.

With the advent of DivX, which is a great video codec, it is now possible to share high-quality video material via CDs or the Internet. I wanted to have a machine that would have all of those functionalities. Computers have those functionalities, so I started to design a multimedia platform which would be versatile and efficient.

At first, it seemed unfeasible. Machines which have the power to do all of this quickly and efficiently were quite expensive and required a lot of space. When you think about it, a standard computer case is much bigger than your average VCR of DVD player. Things have to be scaled down if it would become practical enough to be used. But, that was three years ago.

Since then, prices and size have shrunk and performance has gone up. I managed to find a computer case that wouldn’t dwarf any audio/video equipment when place next to it. I also laid-down some minimal specs for the computer:

3D acceleration would just be a bonus, as it’s not needed.

With the basic specifications figured out, I had to find the right hardware. An Intel Celeron 566 was chosen, as well as an Asus CUSL2-M motherboard with on-board LAN. Basic, but sufficient for the needs of the moment.

I also took a Quantum Fireball AS 20 GB and a Pioneer 16x DVD-Rom drive. I put everything together, installed Microsoft Windows XP and a soft DVD player, painted the case (i wasn’t going to stick an ugly beige box besides someone’S TV), and voilà, an all-in-one TV-top multimedia player!

Well, not exactly true. There were a lot of issues or flaws in the design, some negligible, others not.

First of all, the video playback of the i815 chipset is of very mediocre quality, often skipping a frame or two, and there was image tearing all the time. So, I needed a better video solution. I managed to get my hands on a Radeon 7500 for very cheap. It is a very nice video card, with high-quality 2D, fast 3D, and superb DVD and video playback.

I set it up, installed the software, and the video was now fine. But, it wasn’t really finished yet.

While listening to some music, I noticed that the audio wasn’t up to par. I could compare the sound quality of the on-board audio to a SB Pro or SB 16 sound card – fine for casual desktop operation, but not to listen to movies and music. So, I had to add a Sound Blaster Live! sound card to the mix.

So, most of the hardware decisions were figured out, but I still had to make a decision about the input device. The first thing that popped into my mind was “wireless”. The user has to be able to take the input device(s) around the room without limitations.

So, I bought a wireless keyboard and optical mouse. I set up a multimedia player to open on startup, fool-proofed some functions, and the package was ready for a first test-run. I lent the computer to a typical family (2 adults and 3 children), connected it to their home-network and asked them to tell me anything they like and didn’t about the machine.

The verdict? Well, I found out that they did enjoy it, but didn’t really like the keyboard. They said it felt like a big, giant remote control. However, they did like the wireless optical mouse. They could use it on a table, the couch, the floor – almost anything.

So, I installed a small program that allows “mouse typing”, which is in fact a small keyboard displayed on top of the screen. The final design using the mentioned components was working perfectly, but was slightly always “whining”, mostly due to the 80x80x10mm power supply fan, the videocard fan and the CPU heatsink-fan assembly.

The 7200 RPM Quantum drive with Hydro-Bearings, which is very fast and reliable, could not be heard at all from a certain distance (a couple of feet). The DVD-Rom drive, on the other hand, did produce its share of noise while reading a Video-CD or .AVI file off a CD. The system was complete and operational, but it did seem a little big.

Then, about 6 weeks ago, VIA announced its Eden line of integrated motherboards. I had seen the Mini-ITX format some of these motherboards use at a computer show, but I had never seen any production boards utilizing this form factor. I was looking at the Eden1X00 line of products, which was particularly interesting for my project, since it includes on-board sound, LAN, video-out, CPU and much-better-than-i815 graphics capabilities.

So I contacted VIA Technologies and asked them if I could get an evaluation unit. I was contacted shortly after by Tim Handley. A few emails and four days later, I received an Eden 1400 motherboard 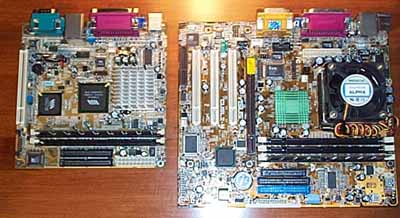 The Via Eden 1400 is an integrated motherboard, which has an on-board Via Eden ESP 533 MHz, built-in video and TV-out, sound and LAN. But the most important thing to my eyes – the footprint. God, this board is small: 170x170mm. This, in conjunction with other moves, would allow me to drastically reduce the size of the multimedia player (the motherboard used before, the CUSL2-M, was 240x210mm).

I searched a little on eBay (always a good place to get unusual components) and managed to get a Toshiba 8x notebook DVD-Rom, a 20 GB 2.5” 9.5mm hard-drive, the necessary adapters, a centrifugal fan and a 150 watt U1 power supply. I modified the power supply so it would take less space (read: remove the metal casing), and measured everything.

I calculated I could fit everything into a custom 220x200x80mm case. The easiest way to make a prototype case was acrylic. I picked up a ¼-inch sheet (semi-transparent black) at my local hardware store, measured, cut, drilled, sanded and polished. It took me a whole 6-hour evening to do all this. Next step was to put everything together.

Since I had to pack that much stuff in such a little space, the interior of the case was very cramped. That is the reason why I decided to add a centrifugal exhaust fan; even though the components used emit very little heat, there’s very little air in the system, and virtually no vents. But, I was wrong.

The on-board Via Eden ESP, when running 3Dmark 2001, produces so little heat that the fanless heatsink cooling it was barely warm. A nice change from My P4 2.0A @ 2.66 GHz (and worlds away from my P4 1.5 @ 2 GHZ and 1.85 Volts!). So, the big centrifugal fan was replaced by a RadioShack 40x40x10MM 12V fan running at 7 Volts. That way, it is virtually silent but it still moves enough air to keep the system cool.

Well, everything was assembled, so I plugged in the keyboard (necessary for Windows installation), the mouse receiver, the TV and the powercord and pushed the power button.

I opened the case to find out that the ATX power connector, strangely, was not connected. It must have been the work of some mystic being roaming around the room (probably the spirit of some dead CPU). Well, having taken care of that problem, I switched the unit on again, popped Windows XP Pro CD in and proceeded to install it.

Everything went smoothly, and I was soon installing the necessary LAN, sound and video drivers for the PL133 chipset. I also installed a soft DVD player and a 1-step DVD-to-DivX application. So, it was pretty much how the final system would look.

The first thing I liked about the Eden 1400 motherboard was the ability to use a color depth of 32-bits, something not possible with the i81x line of chipset. Also, full-screen playback of DVD discs and DivX videos was silky smooth. 2D and video quality improvements were VERY welcome, but there was an other added bonus: the quality of the sound output was easily enough for most speakers system.

I used it using my own Creative Inspire 5700 system, and I could hardly tell the difference between it and my Sound Blaster Audigy! However, if needed, it could be possible to replace the on-board sound by a more “professional” sound card using the PCI connector.

That solution could be considered if the system was to be used with a $x000/x0000 sound system, but it would rarely be the case. So, I chose to stick with the on-board sound. On the LAN side, well, I don’t know what to say: it’s an on-board LAN controller that works; is there anything to add?

Well, I thought about running a few benchmarks.

The first benchmark I ran was MadOnion’s 3DMark 2001. The result? 184 3D Marks. Well, that’s less than 1/50th of what I get on my main workstation. I ran the test several times, always with the same result. I ran a little Counter-Strike and Quake 3 just for the fun of it, and I was getting between 10 and 20 fps at 640-480 with everything turned down.

It did seem low to me at first, but thinking about it, I knew this wasn’t supposed to be a performance system, nor a 3D game console wannabe. 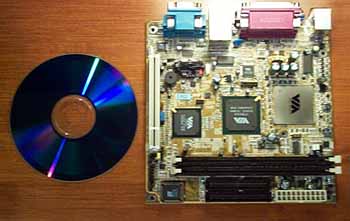 The 533 MHz Via Eden ESP, 128 MB of PC133 SDRAM, on-board sound, LAN and integrated Trident Blade graphics are there to make the motherboard as small and inexpensive as possible, just like I wanted the system to be. Well, the goal was achieved: I was told that the Eden 1400 motherboard would sell at about $100 per piece (but I was assured that the price per unit would be much lower in bigger orders).

With all the other components (HD, DVD, Mouse and PSU), the system I built would cost about $300 (although I paid only $120 total.) I haven’t studied the possibilities very well, but I’m sure that with a little effort, it would be possible to reduce the overall cost (and maybe even size a little) of the unit.

Anyway, I have to say I had a blast designing and building it. Aside from watercooling, it was my first do-it-all project. I have to say I’m quite satisfied with the overall result.

Today Biostar announces the release of its newest motherboard, the RACING B450GT. Designed to run the latest AMD Ryzen processors and marketed as a small board with big performance. The RACING B450GT is built on the micro-ATX platform and uses AMD’s B450 chipset.