SUMMARY: A very good all aluminum heatsink with a manual fan controller. 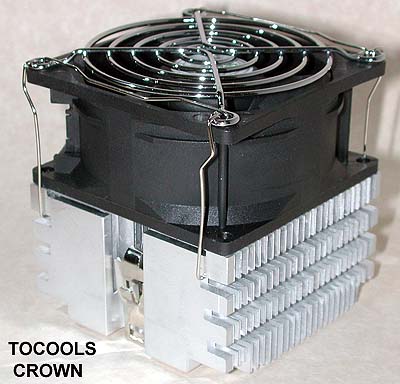 The good guys at TOCOOLS sent me a sample of their Socket A heatsink, the TOCOOLS Crown. TOCOOLS is a new face on the heatsink market. This is an all-aluminum sawed heatsink.

Included with the Crown is TOCOOLS FanCon. This is a variable fan speed controller which can vary fan voltages from 5 to 11.5 volts, for fans up to 6 watts. There is a bypass switch which gets the full 12 volts to the fan. 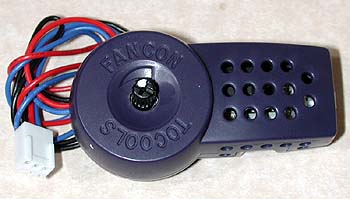 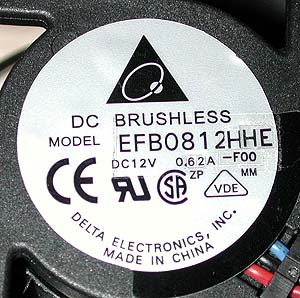 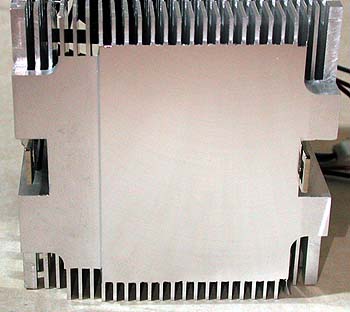 The clip is very stiff and requires a screwdriver to mount. It sits in the slot a bit and may require an angled screwdriver to engage the socket lugs.

In summary, an aluminum heatsink with a very stiff clip powered with a manual fan controller.

The TOCOOLS CROWN was first tested on the CPU Die Simulator which gives results that are unaffected by motherboard influences. I then tested it on an Iwill KK266+, modified to read AMD’s on-die diode, as an example of what users might see on their systems.

Die Simulator results place the TOCOOLS CROWN, at 4689 rpm, in the top rank of heatsinks tested to date (Heatsink Ranking).

Noise becoming more of an issue, the TOCOOLS CROWN is another approach – not as elegant as a temperature controlled approach, but very effective. The heatsink at full bore is a good one – almost surprising, considering its all aluminum construction.