SUMMARY: Good for the basics – pushing beyond might be questionable; for gaming – problematic.

I’ve been using Ubuntu, one of the Linux variants, for the past two weeks and would like to share my experience with it as a desktop OS for “joe/jane sixpack” (I also tried using Mandriva, but found it not as user-friendly as Ubuntu).

Back in the early PC DOS days, using command line syntax was the norm – no GUI. As Windows matured and its GUI became more friendly (and MAC-like), using text commands to copy files, delete, etc, disappeared from view. For me, “been there, done that” about sums up how I feel about Linux – I’m just not really interested in learning text commands to make Linux usable for my desktop.

Enter on the scene Ubuntu:

“Ubuntu offers you a complete Linux-based operating system, including all the major applications you need to play and work. With a strong focus on a desktop that Just Works, Ubuntu is a great choice for home or the office. The base system and all included software is free, and support is available from the community or by professional support providers.”

One of the concerns that anyone must have with an OS is its longevity – will it be around or is it just someone’s dalliance? In this case, there are resources behind Ubuntu – a company called Canonical Ltd: “Canonical employs the core Ubuntu developers and offers support and consulting services for Ubuntu.”

The game plan includes major OS upgrades every six months – nice to see! (Ubuntu FAQs and About Ubuntu – worth a read before doing anything.)

Overall, after reading this material, I feel that the resources behind Ubuntu are considerable and the mission – Linux that “just works” – is one that is consistent with what I wanted. My motivation for even considering Linux is to free myself from paying for Windows and software to make it useful – including paying for continual antivirus support.

With these objectives in mind, I downloaded the Ubuntu Live CD demo and tried it on an Asus P5WD2 motherboard (the P4 Motherboard Test Platform with a modified Pentium D 805) using a hard drive for a clean install. This is a very minimal setup – floppy, CD ROM, HD, and the videocard is a Matrix G450 PCI card – plain vanilla.

It ran flawlessly – after using it for a while, I decided to install it on the HD and use it. The install is VERY simple – answer a few questions and it installed. Now this rig is not linked to the internet, so after playing around with it and liking what I saw, I decided to move the HD to a Shuttle SN41G2 – I decided to just move it to see how it handled being moved from one machine to another.

Here I did run into a problem – it usually took anywhere from three to eight boots to get into the desktop; however, once there it was flawless – no problems running it, very stable and I found the GUI very easy to use. The installed software ran flawlessly as well – not a hitch.

My take on this is that in some instances, Linux just may not like certain hardware configurations. In this case, perhaps the nVIDIA nForce2 configuration is the culprit. I then moved the P4 Motherboard Test Platform out of the test lab to my office and used that instead. On this rig, it installed flawlessly.

Once installed, I then started to use it “live” – now using it on the internet and adding more apps to the system. Here is where the true test begins – can I load apps similar to what I use on XP and have a truly functional desktop that can replace Windows?

The installed apps – Open Office, Gimp, Firefox, Evolution (email) and associated CD reading and burning software – are absolutely viable alternatives for me to Microsoft Office, Photoshop, Outlook and Nero. There are differences, but after taking the time to play with each, the learning curve is not steep at all. You will also need some time to learn how to navigate around Ubuntu’s innards, and for that I would strongly suggest taking time to read some of the on-line manuals before diving into Ubuntu (I did not and should have!)

After doing some exploring, I decided to add some additional desktop software:

All of these were installed using the Synaptic Package Manager – this is a utility that finds and installs Ubuntu apps: 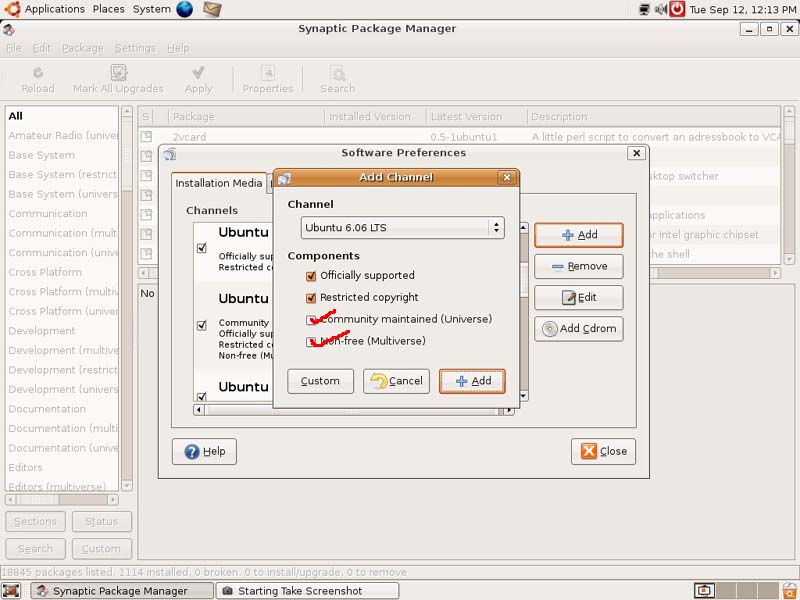 I got this shot using an Ubuntu app called “Take Screenshot” that installs with the OS, and Gimp, the image editor.

To get access to these apps, you have to check the boxes as indicated above. There are programs available (Easy Ubuntu is one) which will install these along with other software, but I chose to manually install only the ones I wanted instead. After that, there is a Search button – type in the name of the app, it finds the Ubuntu version and installs it (you have to allow it to do so).

Adding apps is that easy! Note – no command line syntax needed. There is a LOT of software available, although much of it appears to be either some pretty esoteric stuff or applets for other software. Even so, there are some very cool apps available, and of particular interest are scientific apps that might be on interest to a small community and generally may not be available in Windows versions.

I also added Thunderbird, which is a Mozilla email app that I like. Note also that there are a wealth of plug-ins available for these programs – some very useful, some pretty far-out.

At this point I’m pretty satisfied that this constitutes a very viable Windows alternative. Now for some more apps:
{mospagebreak}

There is a Linux version available (use the beta) so I installed it – problems:

This last point was a learning experience – I would strongly suggest that you go into the Alacarte Menu Editor and enable the Multimedia Systems Selector in Preferences – you need this as a starting point: 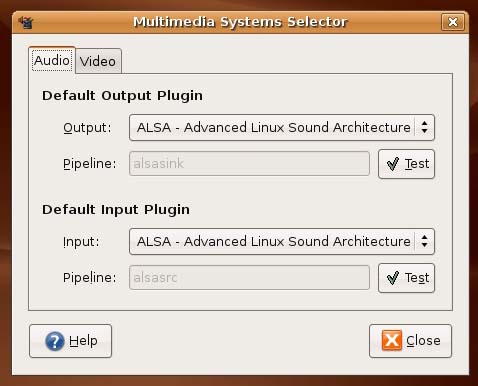 I learned all this on the fly – not the best way, but what you have to do in this case is make sure that all the apps are using the same Input and Output devices. After getting the sound to work OK, I used Skype no problem, although no video. I should note that I also found the easiest way to learn Linux is to use two hardrives with the same install – use one to experiment with and use the second as the “final” version, swapping as you go along (sometimes recovering from changes can be messy).

There is a way to launch Windows programs in Linux using an app called WINE (WINE Is Not an Emulator). This is a freeware program that is an “…alternative implementation of the Windows API consisting of 100% non-Microsoft code”. I tried it and a no-go for me. If you take the time to read posts in the support forum, you find out very quickly that it looks like a hit-or-miss proposition; in addition, if you do get an app to run, the odds that everything will work as in Windows are not very high.

My take – not worth the effort.

After a week of using Ubuntu, I found it to be a credible alternative to Windows – one thing I did notice is that downloading appears to be faster that with XP – perhaps due to no AV software?

At that point, I felt I had to make a decision – either this is a play-thing or I can use this for real. What I decided may seem counter-intuitive: I decided that my wife’s laptop will be an excellent test platform (and user). I came to this decision because I feel that right now, the more you push Linux beyond the “basics”, the more likely you are to encounter problems.

For example, many hardware vendors do not supply Linux drivers. I have a Canon scanner that works fine with Gimp or as a stand-alone scanner, but what does NOT work are the buttons on the front of the scanner for Copy, etc; in short, I got the basic functionality but none of Canon’s utilities. Lesson: When you buy new hardware, see if there are Linux drivers.

In addition, my Epson printer has an ink-monitor – this is not supported by the Linux drivers in Ubuntu. I also found that one pen drive worked fine with Ubuntu and one did not, as Linux is not supported.

What I did not enable was the wireless function – I do not use wireless anymore, so I didn’t get into this; however, from what I have seen on Ubuntu’s support forums, this could go either flawlessly or a total mess.

In looking around on this issue, work-arounds might be available, but the amount of time and effort involved can be all out of proportion to the benefit (lots of command-line stuff to learn and try). If a particular piece of hardware functionality is an important consideration, then Linux may not work for you.

My wife’s laptop is pretty plain-jane; a Compaq Presario 2232US Notebook that I bought from CompUSA. I installed Ubuntu with no problems and it’s up and running as we speak (I took the screenshots you see from this unit). I added the programs I mentioned, but aside from that, nothing else was required – it just works.

Understand what my wife does with this laptop: Email, some light word processing and the internet – that’s it.

My point is that for a user looking for just the basics, a basic Ubuntu setup works just fine. I think that if you are setting up a system for someone like my wife, a totally free Ubuntu system is a very credible alternative to an expensive Windows OS with the usual apps; in fact, if you have assorted spare parts around to build a minimal system, this can be a very nice Ubuntu box to experiment with.

Linux is well beyond the command-line only stage and as such could be a very credible desktop OS “for the basics.” How easily it can be pushed beyond the basics is an open issue – for example, enabling all of a videocard’s functionality might very well drive you insane.

I would alos get the “Ubuntu Hacks” book by Jonathan Oxer, Kyle Rankin and Bill Childers – a very good compendium of hacks to enhance Ubuntu’s functionality.

Expect that some hardware functions may not be supported, examples as I indicated above. I did not get into any details, but from what I can see, porting popular Windows games is problematic; also expect that porting any Windows software into Linux is a crap shoot.

A Beginner’s Guide to Optimizing Windows 98

UPDATE 8/3/00: One of the great things about writing the beginners guides is the E-Mail I receive when posting a new one. Particularly from knowledgeable readers of our site who come forward to help teach the beginner. I stated below

Before the article I would like to say one thing – indeed I did have the pictures I had promised, but out of the entire roll I took only one came out well. If you really need help setting up