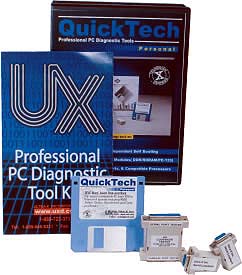 UXD was nice enough to send a sample of their Quick Tech Personal system diagnostic software suite. This is a software version that contains some of the test routines found in Quick Tech Pro. It does not have all of the features that are built into QuickTech Pro, such as the ability to save results, network testing and SCSI support. Similar to Quick Tech Pro, you can boot-up the test routines directly without the OS, although you can run tests also from the OS (running DOS). The test suite has multiple uses – it’s not only for debugging.

A part of it is, but morphing is really a better description.–Ed

This is the story of how my computer has been upgraded step-by-step to being a cheap 600 MHz gaming system! In April, I went to the local computer store and picked up my new computer. System specs: Celeron 366, Jet