SUMMARY: Vantec’s latest Socket A heatsink is another credible alternative to consider.

The good folks at Vantec were kind enough to forward their latest Socket A entry, the brilliantly named FCE62540D; the name alone just conjures up incredibly cool images. 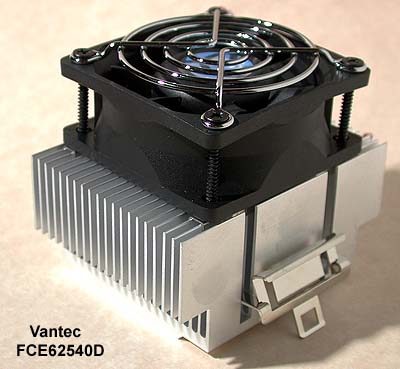 Note the finger guard; the Delta 38 cfm unit spins at about 7300 rpm, so it’s not a decoration.

An first glance, I was struck by its resemblance to Global Win’s FOP series – note the overhanging fins. The Vantec unit is 3/8″ wider and roughly 1/8″ taller than the FOP’s center fins. Fin densities are almost the same – the FOP is about 9 1/2 fins/inch while the Vantec measures 9 fins/inch, although both weigh in with 20 fins total. Because the Vantec is larger, it has slightly more surface area than the FOP.

In contrast to the usual anemic fans most heatsinks use, Vantec mounts the Delta 38 cfm unit (# AFB0612EH) on this one – you know, the LOUD one (46.5 dBA). Motherboard Monitor reported fan speed at 7300 rpm – about 500 rpm over spec. I don’t know if this a tad faster than the reported spec, as the fan amperage indicates 0.48 at 12 volts on the fan label while the website spec lists 0.32.

The base finish was a notch above most others in this price range – no noticeable finish marks; not Alpha smooth, but not bad.

One feature I liked: The Clip. This clip was very easy to use and did not require a needle-nose pliers or screwdriver to mount the heatsink on the socket; a nice design that does not shred your fingers. It was also easy to dismount as well. Interestingly, even though the clip is wide enough to engage more than one socket lug, it only engages one; I would guess that this allows easier mounting force while being suitable for either Socket A or Socket 370 use.

If you are not endowed with fingers of steel, you might want to consider the Vantec.

I bored a 1/16″ hole through the base so I could epoxy a thermocouple above the CPU. The thermocouple is attached to an Omega HH23 Digital Thermometer. Ambient temps were measured with a thermocouple placed about 1 inch from the fan’s intake. I used Prime 95 to stress the CPU on an ABIT KT7, running a Duron 800 @ 1000 (52.6 watts). The Duron is actually a more severe test as its area is less than the T-Bird, so there is a higher watt loading by area. Arctic Silver grease was used in all tests.

At 0.30 C/W, the Vantec is a player among the latest credible Socket A heatsinks, although the Delta 38 pushed it into this territory and could be a bear to live with. Mounted with something like the Papst 33, the Vantec will perform closer to the FOP, probably in the 0.35 C/W range.

The aptly named Vantec FCE62540D is a competitive alternative to consider for Socket A cooling among those who are not bothered by loud noises and who value their fingers. While not the absolute best possible cooling solution, it is within striking distance to be seriously considered. I would not recommend “de-tuning” this heatsink with a less powerful fan.

NOTE: Ships with a 3 to 4 pin adapter so you can use a 4 pin hard drive plug to power the fan; some motherboards will not support the wattage this fan requires.

SUMMARY: A new face on the cooling scene, Millennium’s first entry may deliver Alpha+ performance. Andy Lemont of Millennium Thermal Solutions is an interesting guy; he holds a number of patents on fans and has been kind enough to tutor