SUMMARY: A good attempt at controlling peltier temps, although some improvements would make it a better product.

Variable PC emailed me last week about their product called VPC. By continuously switching voltage to peltiers, it keeps temps within a selected range. According to VPC, “The VPC varies the power if it sees less than 1 degree F of variance. It does this in less than a second.” 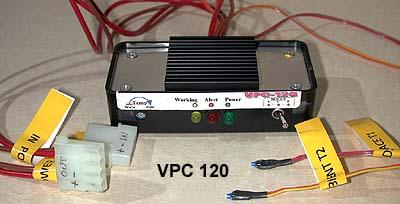 This product should allow you to keep CPU temps at ambient, thereby avoiding condensation problems. If you want to run a TEC on your CPU to keep it within +/- 5C of ambient, the Variable PC may be what you need. I asked to test a sample and they sent a loaner to try out.

Right now there are three models rated by how many watts each can control – VPCs 80, 120 and 160 (detailed specs). The unit I tested was the VPC120, which has three modes:

Maintaining a temp differential to ambient avoids condensation problems if you keep the difference around zero. This mode requires two temperature thermistors – one to monitor ambient temps, one for cold-side temps. If you want to run the CPU at a given temp, then the second mode, which just uses the cold-side probe. The third mode, Constant On, turns off the temp monitoring functions and just passes the current through to the TEC.

In order to use the VPC, you must place the cold-side temp probe someplace to monitor the temp you want to control – in this case, on the TEC cold side, coldplate or CPU. And therein lies a problem: 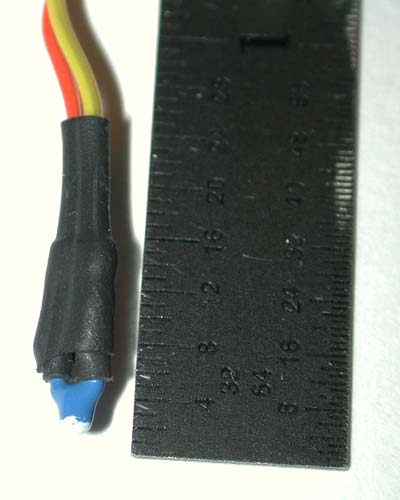 As this pic shows, the probe is not exactly “svelte” – it it too large to fit between a coldplate and CPU, so anything close to a CPU is out. There is no way to get this behind a socketed CPU, so placing it there is out. Potentially, you could bore a hole in a coldplate and stick it above the CPU, but the hole will be on the large side, possibly compromising performance. This is a significant drawback to using the VPC to monitor CPU temps.

To use the VPC, there are four wires: Two temp probes and two four pin HD connectors for power out and in (all clearly labelled). Hook up a power source to the Power In connector, the TEC to the Power Out, place the T1 probe on the cold source and the T2 to measure ambient temps. There is a three position switch to choose among the modes.

When you power up, there is a green “Power” led on the VPC that indicates power is flowing OK. The “Working” led is yellow and is lit when power flows through to the TEC. If working power is lost, the “Alert” led lights up and the VPC emits a constant beeping sound. If you try to push more than 120 watts through it, it will scream at you and shut down.

On the extreme left, there is a 3/16″ hole with a phillips head adjustment screw for setting temps. I found it to be very sensitive – once you find your “sweet spot”, rotating the set screw slightly will move temps 3-5 C; I think this is too sensitive for fine adjustments.

Note also that the VPC is a “stand-alone” product – there is no mounting hardware which would allow you to use a spare drive slot, for example. Considering that you may want to switch modes or adjust temps, the lack of a mount is puzzling.

To test the VPC120, I placed the probe on the edge of the copper coldplate: 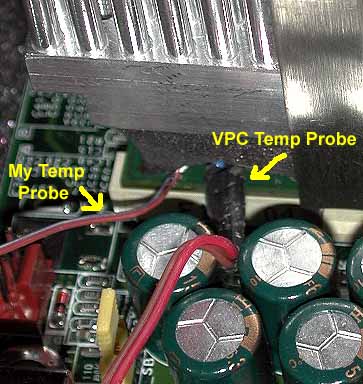 First, I enabled both thermistors to test how well the VPC120 will maintain a constant differential between ambient and cold-side temps. I rotated the temp control to the extreme right (Cold) and booted up. I let things settle down a bit, watched CPU temps (on-die temp diode) in Motherboard Monitor and adjusted the temp screw to keep CPU temps to about 12C when idling. This is not as easy as you might think.

What I found is that temps cycled over a 15 C range until they settled into a 5 C range, after about 5 minutes. The “Working” led settled into a pattern of 5-6 seconds ON, 8-9 seconds OFF. The heatsink itself, at idle, was actually cool to the touch, reflecting this pattern; this in itself is a BIG plus to lower case temps. I used Prime 95 to stress the CPU; the “Working” led was on continuously and the heatsink was very warm to the touch. I then ran at idle again and recorded temps.

I then moved the temp screw about 1/32″ towards “Warm” and recorded temps again at idle and with Prime 95. Each stage was at least 15 minutes long, and the last test was with Waterfall ON.

Next, I tested with only one Thermistor – the one on the copper coldplate. This is to maintain a selected coldside temp regardless of ambient temps.

VERY IMPORTANT: When you go from two thermistors to one thermistor, the temp setting is totally different.

You can not switch from one setting to the other WITHOUT resetting the temp adjustment – and it’s not a minor change. I found I had to rotate the temp adjustment quite a bit from where it was with two thermistors. I tried to set it close to temps I had earlier.

Because the TEC was cycling on and off, CPU temps cycled in a wider range compared to temps under stress. When first booting up, this cycling is more pronounced; it took about 5-10 minutes for the VPC to settle into its operating range. I would assume that, in a “normal” working environment, you would be more likely to see the variation I did as the CPU stress load varies.

Under constant stress and depending on the size of your TEC and temp setting, you’ll probably see a more regular pattern. Whether the cycling I observed is acceptable for CPU temperature stress, I can’t tell. All things being equal, the less variation, the better. Considering the wide range CPUs normally experience, the temp cycles observed don’t appear too extreme, although the continual cycling while idling might be disconcerting to some.

It is VERY IMPORTANT to point out that the temperature range of the coldplate was NOT as extreme as the CPU.

Because of the thermistor’s size and its relative distance from the CPU, the use of the copper coldplate was neccessary but not the best solution for controlling CPU temps. A thin thermistor, placed next to the CPU core, would be significantly better and a major improvement in this product.

The VPC 120 is a product that I feel meets a real need among those of you with TECs. If you are using a TEC for extreme cooling, this product is not for you. If you want to use a TEC for moderate cooling, then potentially the VPC product line is a solution. However, I think the following areas must be considered before purchasing:

Improving the VPC product to account for what I feel are shortfalls would result in a better, although perhaps more costly, solution. However, even with these reservations, the VPC is a big step forward in taming TECs for “normal” use and is worth serious consideration.

I want to thank Variable PC for letting us use the VPC 120 to test. I decided to buy it for further testing.