I ordered myself two of these coolers for my 7800GT SLI setup from fadfusion.com, since they were on sale at $36.00 each. Two with ground shipping only set me back $86.34, which only took six business days and arrived a day early! UPS was the shipping courier, so this was rather surprising, as I’ve always had items arrive late or beat up with UPS. These arrived well packed, prompt and without damage.

Here they are, two of the finest items available from Zalman! 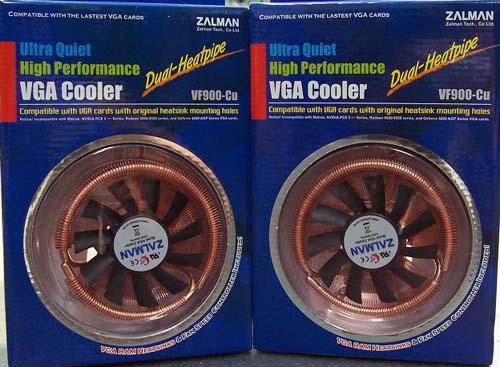 I don’t know if Zalman laps the base of these coolers, but it sure is shiny! My bet is on machine lapped and then polished. Just look at the amazing reflection on these! 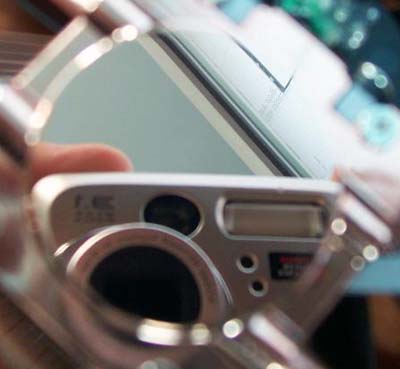 The VF900s come complete with pretty much the same outfit as the VF700s, just different mounting hardware. First off, the cooler: 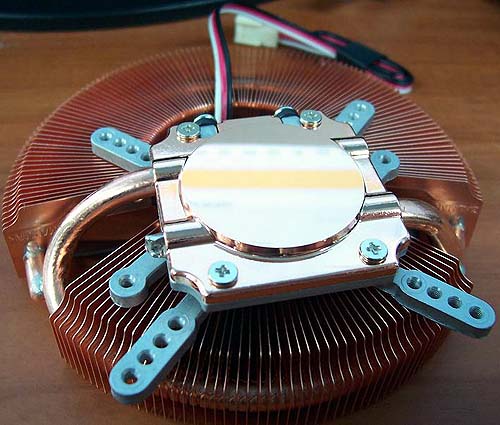 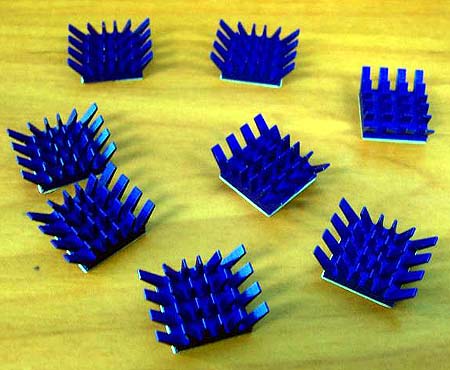 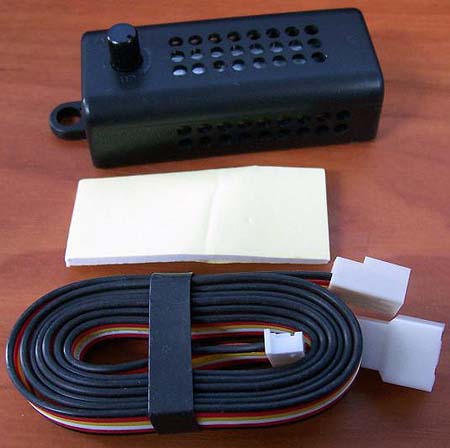 And the mounting hardware: 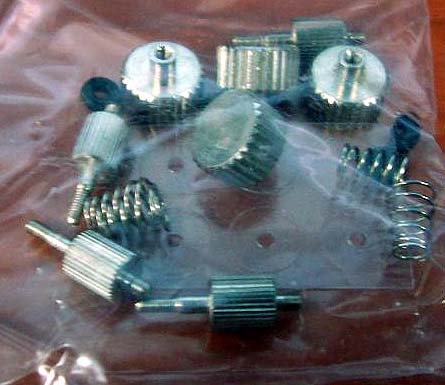 Also included is a manual and thermal grease.
{mospagebreak}

The first thing I did after pulling these out of their cartons is applied the mounting hardware. This way I could photograph and sleeve them without worrying about the base sliding across my work surface/desk. The next move was to use up the last of my 1/4″ sleeving and do a quick flat black paint job on the connectors, making them look better than they already did. Not that they looked bad before all of it. 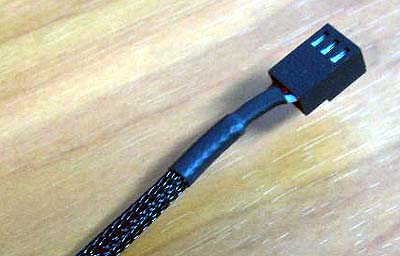 Now that the coolers were finished with sleeving, it was time to investigate some comparisons and improvements of the VF900 over the VF700.

Here are the two coolers before installation…

And installed with the VF700-Cu on one card and the VF900-Cu on the other. A nice thing about having two video cards of the same model is you get some good comparisons without having to take so many pictures. 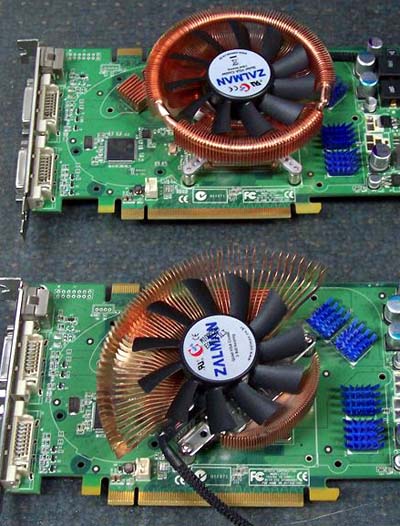 Now one thing I found to be a little irritating about the VF700s, is that you couldn’t use any third party RAM sinks without a little bit of modification to the cooler. Why? Because the VF700’s fins have three “steps” to them: 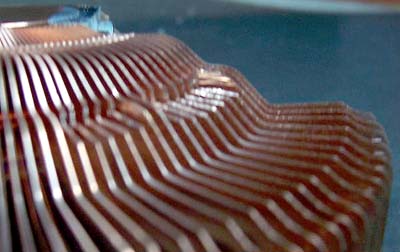 The second step is too low for anything else except for the blue Zalman ones. If you don’t mod the cooler when using a third party RAM sink, the heat sink will sit on top of the RAM sink and not make contact with the GPU. I modified both of my VF700-Cu’s to accommodate space for the Vantec Iceberq copper BGA sinks. In the picture below, these are the only RAM sinks that prevent proper mounting without cooler modification:

As you can see, the VF900 does not suffer from this problem, therefore no modification to the heat sink is necessary, preserving it’s glory.

Another thing to take note of is the mounting of the cooler from the back of the card. Why? Because this effects the GPU contact as well. The VF700s are mounted with a crossbar back plate: 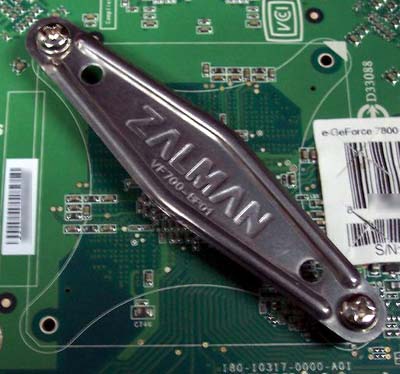 This prevents any warping to the card from it’s two contact point pressure mounting system. Not only does this take some time to install, but it also does not distribute weight evenly across the GPU core. Don’t get me wrong, the VF700 mounting system is great and it does apply good solid pressure to the core, it just isn’t as effective as four point pressure mounting, which is exactly what the VF900 uses: 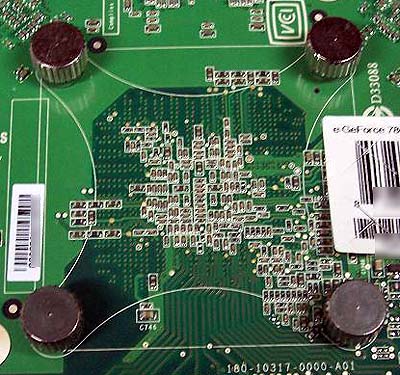 Let me explain the VF900 mounting system for a bit:

Traditional modern Zalman coolers have been secured to the hardware by a bar which goes from one side of the heat sink to the other side; you put a screw in each end and tighten to standoffs secured to the hardware by a back plate of some type. You start threading each screw into each end, then tighten down each side slightly, alternating from side to side until it is fully tightened.

The VF900 mounting method differs from this however. You first install the legs to the heat ink in the appropriate hole, according to what card you are mounting the cooler to. After that you slide a small rubber grommet over each leg which helps to pad the mounting hardware from the top side of the card.

After applying thermal compound to the GPU, put the cooler fan side down and lower the card onto the cooler while keeping it straight. After this you slide a plastic washer over the exposed legs from the backside of the card, followed by a small spring and then the tightening nut.

After you start threading each nut, turn each one slightly, moving from one corner to the opposite corner. For instance, the lower left, the upper right, the lower right, followed by the upper left and so on. This mounting scheme ensures even pressure across the GPU surface while eliminating the need for a back plate, since there is no “point to point” mounting, and the cooler is held on squarely so no warping happens.

Here they are, both installed in my ASUS A8N-SLI vanilla. I’m still working on a glamour shot of these gems:

One question you might be asking here: Are those modified CardKeepers you see? 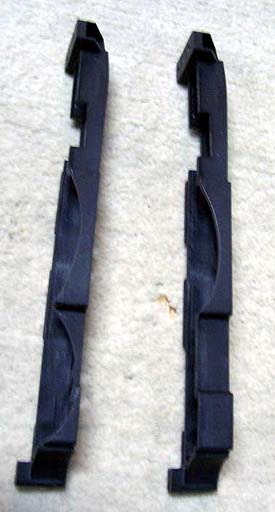 Yes they are! I originally modified them for use with the Zalman VF700-Cu’s, but the bottom card is using one I modified for use with an Arctic Cooling NV Silencer 5 Rev. 3, but that cooler didn’t do so well.

As for results, I haven’t gotten around to running it under load yet, but my idle temps have dropped 2-3°C so far. Here’s my temps, and I’ll be updating this and adding it to the original post after I get load temps with these coolers.

I’m now getting 67-69°C load temps vs. the VF700’s 70-73°C, room temp is 75°F and ambient case temp is around 34°C give or take a degree. The same room temp and fan configuration, wire management and so on. I’m very pleased with these coolers, I no longer have that “it’s going above 70?!” in the back of my mind when playing games.

I recorded temps running Rivatuner’s hardware monitor in the background, which has the ability to “log” temperatures and readouts. It gives me the exact same readings that nvmonitor and the nvidia control panel gives me.

For hitting those temps, I ran Far Cry, and went to the pier level. After hang gliding across to the other mountain, I get on a rock and look out over the map. Nothing else seems to get my temps higher than letting the computer sit at this point in the game for 30 minutes to 10 hours. I’ve let my computer sit at that point in the game overnight for 10 hours and the temps never differed from the temps I got from 20 minutes of testing. 3DMark, Farbrausch demos, Doom 3, HL2, FEAR, oblivion or Condemned don’t get my temps that high either.

Cons: Cannot be used on SLI setups with short slot distances, expensive from most suppliers.

So far I’m pretty happy with the 3.5 dBA noise drop. It’s not all that noticeable at first, but after spending some time with the cooler you start to wonder if they’re really on.

I hope this has been of some help to those of you debating on which cooler to get. If you’re looking for a cheap, high performance GPU cooler and just want it to do the job well, go with the VF700-Cu. If you want a cooler that’s easy to install, quiet, high performing as possible, good looking and very effective, go with the VF900. It’s about $15-$20 more, but I found it to be worth it.

When I received my new Gladiac from Hyper Microsystems early last week, I was a bit stunned. The box looks like a graphics student’s project gone amiss. But hey, a book by it’s cover and all that. A least I

First hints as to pricing. – Ed