We’re continuing on with our coverage of the GPU14 products released this week by AMD. Today, we have a budget minded offering coming in the form of the R7 260X. Just like the R9 280X and R9 270X we’ve already had a look at, this one is a re-badged GPU based off the already existing Bonaire GPU core. So far, AMD has done a nice job revamping existing GPUs for their GPU14 lineup; let’s find out if that trend continues as we explore the R7 260X.

The AMD R7 260X specifications are listed in the slide below, which was pulled from the press deck we received. 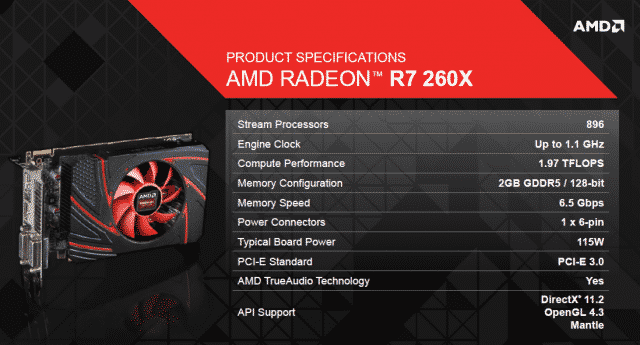 GPU-Z verifies what we see above and adds some additional details as well. We can see confirmation of the Bonaire GCN GPU built on a 160 mm² die using the 28 nm fabrication process. GPixels/s and GTexel/s come in at 17.6 and 61.6 respectively.When compared to the Bonaire GPU core used on the HD 7790, we have a 100 MHz increase in GPU speed and a 125 MHz increase in memory speed. Sounds promising.

To give you an idea of the value AMD is trying to portray, they show a comparison of today’s pricing on the R7 260X versus what the HD 5870 was priced at when it was released. Seems like a lot of GPU for $139, stay tuned! 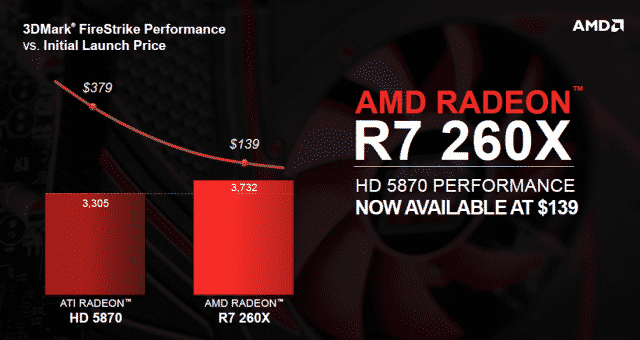 The R7 260X has been assigned to compete directly against the NVIDIA GTX 650 Ti. AMD’s in-house testing shows it beating the GTX 650 Ti hands down in a multitude of different games. We’ll see if this holds true in our testing later in the review. 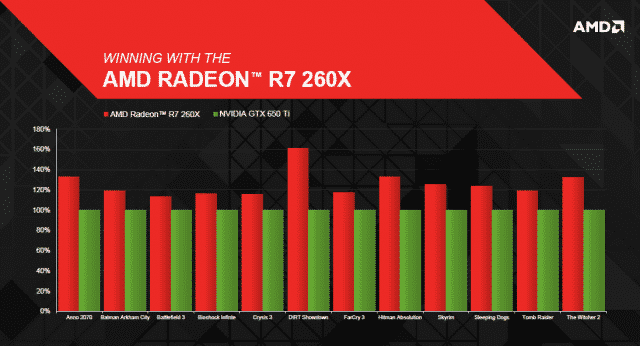 The popular Eyefinity technology is available on the R7 260X, which can support up to six monitors using a DisplayPort Hub. That being said, six monitors might be too much to ask from a card in this class, but I would venture to say a dual monitor setup would be fine. 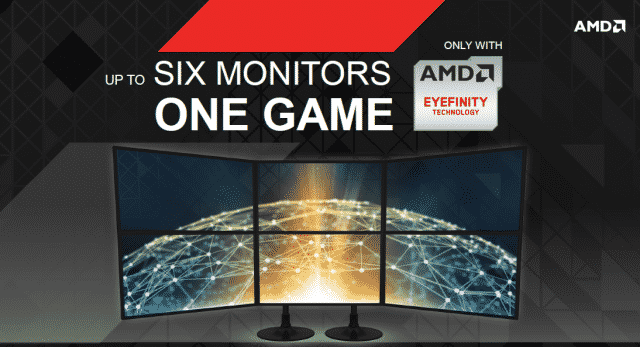 TrueAudio is a promising new 3D audio technology being developed in conjunction with several game development, audio middleware, and processing algorithm partners. It’s no secret audio performance on a PC has been stagnate for some time now. With only 10% of CPU utilization being dedicated to audio, game developers have to develop to the lowest common denominator. Because of this, there isn’t much time spent on enhancing audio effects, as not to impact overall game performance. Enter TrueAudio, which can do it all CPU-free. TrueAudio is a DSP and not a CODEC, meaning it replaces what you can get through audio, but not where it comes from (standard audio out ports, USB, HDMI, etc,) Below are a few slides further detailing TrueAudio. You should be able to purchase several game titles supporting TrueAudio in the coming months.

Here are several glamor shots of the R7 260X, cute little guy, ain’t it? You can see it uses a conventional downdraft style cooler, so proper case air flow will be at a premium.

I measured the overall length of the card and came up with 6-7/8 inches. To give you a visual sense of the card’s size, the next slideshow is a series of pictures showing it next to the R9 270X.

Removing the cooler is a simple task that only requires the removal of four screws at the back of the card. Once off, we can see an additional heatsink covering the MOSFETs that should get a good amount of airflow from the fan. Once AMD partners roll out their own versions of the R7 260X, you’re likely to see coolers much different than this one.

Here are some images of the R7 260X undressed. We’ll dive a bit deeper momentarily.

Moving in for a closer look reveals a 4+1 power phase design and a single 6-pin PCI-E power connector. We can also see that Hynix H5GQ4H24MFR-R2C has been used for the 2 GB onboard GDDR5 memory. The memory on the R7 260X is set to 1625 MHz (6500 MHz Quad Pumped), but the Hynix specifications say it’s capable of 1750 MHz (7000 MHz Quad Pumped) at 1.5 V. Hopefully, that equates to a fair amount of memory overclocking, but we’ll see. And finally, we have a good view of the Bonaire GPU core.

Just as we found in our earlier R9 280X and R9 270X reviews, overclocking software hasn’t quite made jump to these new GPUs as of yet. They allow core speed and memory speed to be adjusted, but we don’t yet have any voltage control. However, that won’t stop us from seeing what the card can do without voltage manipulation.

After quite a bit of tinkering, I finally settled on a GPU core speed of 1250 MHz and a memory speed of 1825 MHz (7300 MHz Quad Pumped). That’s a +150 MHz increase in core speed (12%) and a +200 MHz increase in memory speed (11%). Not too shabby considering no voltage increases were available. Because of the lack of voltage control, and that I’ve basically reached the maximum this card can do without it, we’ll forgo the “Pushing the Limits” section of the review. We totally expect this to change once the AMD partner cards arrive in our hands for review… sooner than later!

Our new “GPU Testing Procedure” has been in place for several months now, but If you are not yet familiar with it, click the provided link to learn more. Below is a quick synopsis of the procedures we adhere to.

This will more than likely be the last reference design card we review in the AMD R9 and R7 series, so we’re going to chart all three that we have reviewed to date. We wanted to give our readers a quick way to compare the performance between the three cards we received at launch – the R9 280X, R9 270X, and today’s R7 260X. Because the R7 260X is pointed directly at the NVIDIA GTX 650 Ti, we’ll also include results from that. However, please note the GTX 650 Ti we have for comparison is actually EVGA’s GTX 650 Ti Boost SC edition. That card has a faster core speed, faster memory bus, and faster memory speed than the reference design GTX 650 Ti that AMD undoubtedly used for its in-house testing. So, we’re likely to see disparities in our test results versus what AMD shows. But, as long as the R7 260X hangs tight to the GTX 650 Ti Boost, AMD’s claims would definitely be substantiated.

Ok, with the disclaimer out of the way, let’s dive into our synthetic benchmark results. Here we see the R7 260X indeed holds tight to the GTX 650 Ti Boost and actually beat it in the 3DMark Vantage test. Once the R7 260X was overclocked, it was able to overtake the GTX 650 Ti Boost in our 3DMark Fire Strike test. At stock settings, we actually achieved a better 3DMark Fire Strike score than AMD noted in their press deck. Nothing to complain about in the synthetic tests, and the R7 260X seems to live up to its advanced billing.

Moving on to our game benchmarks, we see a similar pattern with the R7 260X holding close to the GTX 650 Ti Boost. When overclocked, it even managed to top the GTX 650 Ti Boost a couple of times. The R7 260X showed nice scaling as well, which is always a good thing! Again, nothing to complain about here, and performance levels were just as expected.

As a side note, I spot checked the AMD in-house testing results that I could match up to our testing. Of the two direct comparisons I found (3DMark Fire Strike and Battlefield 3), our test results actually came out a little better than what AMD showed. It’s nice to see accurate marketing claims from AMD, kudos for that!

Our temperature testing procedure entails running HWBot Heaven at both stock and overclocked settings. The results are normalized to 25 °C ambient. Testing includes the fan control set to auto, and then again with the fan speed set to 100%. Because the cooler’s heatsink is made entirely of aluminum, things got pretty warm when the fan control was set to auto. The fan never ramped up much past 50%, which contributed to the high temperatures. Those high temps don’t concern me much as AMD partner cards will undoubtedly have much better coolers on them.

With the fan set to 100%, we see a marked improvement in temperatures across the board. They are still a little higher than we like to see with the fan set to 100%, but adequate. As far as fan noise goes, lower speeds result in very little noise. When ramped up to 100%, the fan makes itself known; but not what I would call obnoxiously so.

Our power consumption testing is done with a Kill-a-Watt, and wattage usage recorded at idle and load. We run both HWBot Heaven and 3DMark 11 (Combined Physics Test) to hopefully get the maximum power draw the video card can produce. I take this testing one step further and also provide results while the video card is overclocked.

Power consumption for the R7 260X is insanely low. With this card installed in our test bed, the whole system at idle drew a mere 98 watts. Heck, I’ve got light bulbs in my house that draw more than that… Crazy! The most power draw I could get was when the R7 260X was overclocked and benchmarking HWBot Heaven. Even at that, the highest power draw recorded was 231 watts. Combine power consumption like this with a little better cooler from AMD partner cards, and you’ve got something that would be great in a HTPC application too.

As I’m sure most of you are aware by now, NVIDIA lowered some of their pricing to better compete with these new AMD R9 and R7 offerings. It’s hard to tell how this “price war” is going to shake out over the next few weeks, but what I see right now won’t sway a Fan Boy of either side from changing allegiance. AMD says the R7 260X is priced at $139; but when partners slap their own coolers on, expect a $5 to $10 increase in that price.

If TrueAudio takes off like AMD hopes it will and the upcoming Mantle API is widely adopted by game developers, the value of AMD graphics cards will be even more appealing to potential buyers. But, just like the pricing tug-of-war, we’ll have to wait and see how this all plays out over the coming months.

As our testing indicates, the R7 260X performed quite admirably for a card in this price range. Once game titles that take advantage of TrueAudio are released, this card will have something the more expensive R9 270X/280X cards do not… support for it. That will add even more value to the asking price. An inexpensive gaming video card with awesome audio potential sounds like a pretty sweet deal to me.

During our recent trip to CES in Las Vegas, we had a great meeting with the guys from Swiftech. They had several items on display for us to look over, but their main reason for being at CES was to introduce the new H220 all-in-one water cooling system. So, what makes the Swftech H220 stand out against the plethora of other manufacturers offerings? Actually, there is a number of things that we’ll explore! Read More

Talking to Forbes, VP and General Manager of AMD’s Graphics Business Unit, Matt Skynner, confirmed a couple details about the upcoming enthusiast level GPU from AMD. The new GPU and graphics cards built around it will show up in the last quarter of 2013, as expected. Read More

Well, the wait is not over yet but we’re happy to report we actually have an HD6990 in-house! Read More