Somewhat radical mod, not for the faint of heart – Joe

We (Overclockers.com or Me) are not responsible for any damage caused by anyone performing this mod, do this at your own risk. This should only be attempted by people who are capable of performing this easily and have had some experience soldering.

If you would still like to perform this mod and feel you do not have the skills required, I recommend purchasing a DIY kit such as a small amplifier or radio to help develop your skills. These are quite cheap and should be available from stores such as Maplin (in the UK) and Radio Shack (in the US – there are others as well, but I am using this as an example)

I have a very old motherboard in my computer – an Abit KT7A. I still use it because I have very good RAM that can do 170 MHz @ CAS 3 or, as I usually run it – 160 MHz CAS 2. This motherboard also supports the new Barton core (last time I checked). In addition I have no money so I cannot afford to purchase a motherboard and DDR ram at the same time, or even on their own!

There have been a few solutions suggested so far, the most common one being taking a spare 5v cable and attaching it directly to the gate of the 5v regulating MOSFET’s to provide additional power. However, since the motherboard smoothes and regulates the 5v line, the 5v that is being given to it directly has lots of noise which is responsible for crashes.

Another idea would be to increase the capacitance of the smoothing capacitors on the motherboard so that more power can be stored – allowing more to be delivered when needed (this is when the 5v line goes down) so the line wouldn¹t not fluctuate as much.

However, I chose a different way.

5v regulators are available at every electronics shop, such as Maplin (in the UK) and Radio Shack (in the US); they cost very little and are very effective and taking a higher voltage down to 5v.

I chose to regulate 12v down to 5v to deliver to the MOSFETs. This is because when the 5v regulator is in the circuit shown below, it is very effective at keeping 5v very clean, thus reducing the amount of crashes and preventing the 5v from fluctuating.

The regulators I chose is a common 5v regulator called the 7805, in the UK is costs about £0.35 so you should be looking to pay about $0.50 in the US for one, the layout of this chip is shown below:

This can then be put in this circuit:

For this purpose, C1 should be above 470 uf (I used 2200 uf), although I recommend a large value and may increase the capacitor in the future. The voltage rating should be above 12 v (common values are 16 v and 25 v).

I took the 12v line off the back of the motherboard where it connects to the motherboard connector; it was then routed to the front though two holes (shown in the picture below) 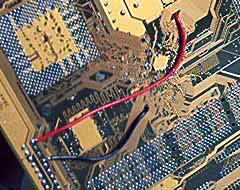 I then soldered the regulators directly to the pins of the MOSFETs per the attached diagram: 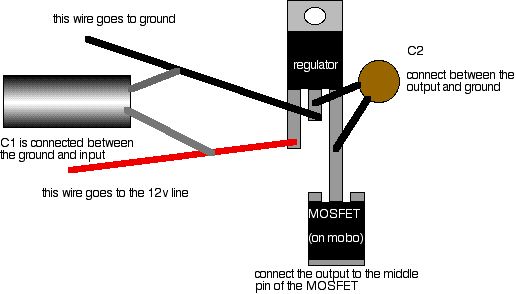 This reduced the resistance so the voltage is closer to 5v. I used one regulator per MOSFET and each regulator had a smoothing capacitor, even though the electrolytic capacitor was shared between them. Completed, it looks like this: 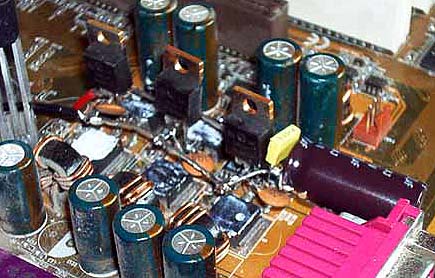 Please make sure that the electrolytic capacitor is the right way around – something I stupidly overlooked until I had put the motherboard INSIDE the case. It took time to remove the motherboard and re-do it, but the results would have been much worse if I hadn’t noticed at all, so be very careful.

Electrolytic capacitors have a band on one side with “­” signs going up the side. This is the negative side (see the picture below); the other capacitors used in this are not polarised (it does not matter which way it goes)

Notice the white band with the minus signs ­ this shows the negative lead.

If the voltage regulators get very hot (touch the PLASTIC part of the regulator to check ­ not the metal tab as it is live), then you can heatsink it – use TO-220 heatsinks, which are quite small and should look something like this:

Any problems, feel free to contact me via PM on the Overclockers Forum.

We’ve said some nice things about the IWill KK266. A couple of our readers have not. I’ve taken a look around the IWill BBS and a couple other places, and while I’m not seeing too many problems, they are problems

The last MSI motherboard I attempted to review caught on fire. This one did a little better. Actually, this board comes close at times to inducing you to set it on fire, but never quite crosses that line. Our Philosophy

Chris posted this in the Forum – many are interested in this board so we are posting it here as well. My research and experience with the ASUS P3V4X and VIA 133A Chipset Well, I just thought I’d share some