SUMMARY: More heatsink manufacturers are paying attention to noise levels – the Swiftech MCX370-0A is a very good balance between noise and performance. 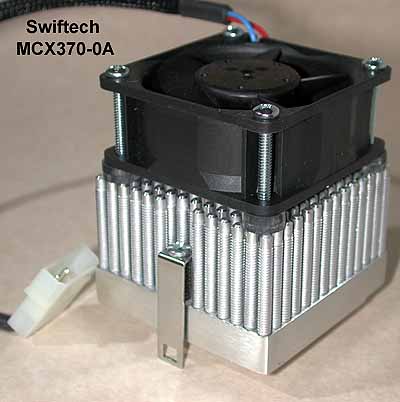 Swiftech was nice enough to send over a sample of one of their latest entries, the MCX370-0A (Socket A and 370). This heatsink is an update of the very successful MC370-0A; the primary differences are the grooved pin fins and the mounting of the fan. Note that this is an all-aluminum heatsink – somewhat “retro” considering the “copperization” of performance heatsinks.

The picture above clearly shows that the Papst 33 cfm fan is now raised above the fans by rubber washers; this serves to isolate vibration and reduce noise, although the four steel mounting screws will transmit some noise and vibration to the socket. The Papst uses a four pin connector – there is no tach output for it.

The mounting system used on the MC series is one of the best around, if not THE best, using the socket’s center lugs. The flat strap on the heatsink’s sides are held in place by springs; the springs are designed to deliver the right amount of force and balance (they are of unequal tension) to hold the heatsink in place with the absolute minimum of stress to the core. Mounting and dismounting is a breeze:

Engage the side straps on the socket’s lugs. Then turn each screw a couple of turns at a time until the screw head clears the top of the metal strap. That’s it! Correct placement and tension. Removing the heatsink is just as easy – reverse the process. Kudos to Swiftech – a truly elegant design.

As this pic shows, 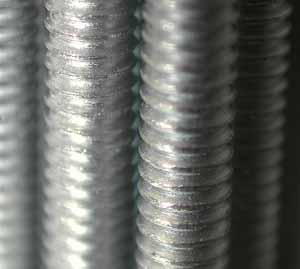 the pins now look like screw threads. This is an attempt to increase surface area, as the pins previously were smooth. In heatsink design, surface area is the number one priority for cooling efficiency, so this is a good move on Swiftech’s part.

Swiftech routinely delivers one of the smoothest and flattest bases of any heatsink around. 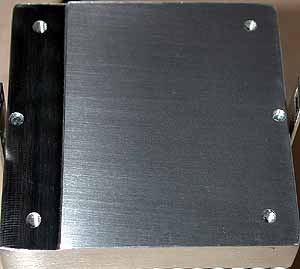 The base of the MCX370 is absolutely smooth to the touch – you can not feel, nor see, any obvious machining marks. I would NOT recommend anyone attempting to improve on it – you can only make it worse*. The base is a little over 7/16″ thick, so this is a hefty chunk of aluminum. The attempt here, I believe, is to use the thicker base to equal performance of something like 1/4″ copper.

I prepared the Swiftech by boring a 1/16″ hole completely through the base so I could epoxy a thermocouple above the CPU. The thermocouple is attached to an Omega HH23 Digital Thermometer. Ambient temps were measured with a thermocouple placed about 1 inch from the fan’s intake. I used Prime 95 to stress the CPU on an Iwill KK266, BD133 (MBM temps are on-die) and Abit KT7. Arctic Silver grease was used in all tests. CPU Case Temp is the temp at that point where the CPU contacts the heatsink, CPU Back Temps are measured by a thermocouple on the center back of the CPU.

Raising the fan above the pins with rubber washers does reduce noise somewhat; I measured sound levels with the washers and without, and found a 1-2 dBA improvement. I also found that performance was about 1 C better with the elevated fan.

Swiftech is noted for producing excellent, well made products. The MCX370-0A is a good update to the MC370, although if you have the older version, I do not think the performance improvements are significant enough to justify scrapping the older version. For those who are concerned about noise and can accept a performance tradeoff, the MCX370-0A is a worthy of consideration, especially if you value idiot-proof mounting systems.

Thanks again to Swiftech for sending the MCX to test out – it’s also available from Crazy PC.

*In preparing the heatsink, I do not use sandpaper to smooth out the thermocouple placed in the base; I now use razor blades and find that it does not disturb the original finish.