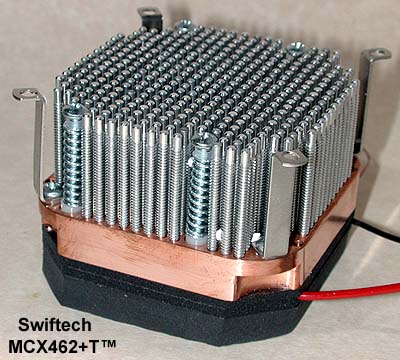 The kind folks at Swiftech were nice enough to send a sample of their latest heatsink, the MCX462+T ™ Thermoelectric heatsink for AMD ® CPUs. This is one hefty heatsink – it features

It weighs in at almost two pounds. It is bolted to the motherboard through the four holes around the socket, using spring-loaded bolts. Once tightened up, correct pressure is applied to the CPU.

The base is very well finished: 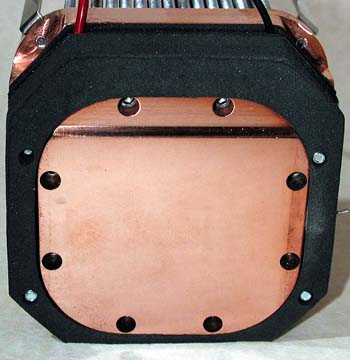 Flat bases are a Swiftech trademark. The TEC is held in place by 8 bolts which are visible around the base. Mounting pressure for a TEC should be something on the order of 80 – 100 lbs, so an assembly such as this is required.

In summary, a beefy copper base / aluminum pin heatsink with a 226 watt TEC.

The MCX462+T ™ was first tested on the CPU Die Simulator which gives results that are unaffected by motherboard influences. I then tested it on a Shuttle AK31, modified to read AMD’s on-die diode, as an example of what users might see on their systems.

I also measured Cold Plate Temps – Swiftech kindly bored a small hole on the side of the plate to embed a thermocouple over the CPU.

Swiftech’s site has a performance graph showing temp results for different CPU loads. On the graph below, the Blue Xs are the results I attained (tables above) compared to Swiftech’s: 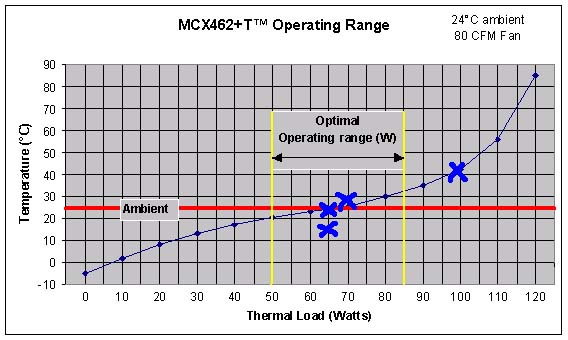 Note that my test conditions are very close to Swiftech’s and that the load temps I found track very closely. The notable discrepency is what I achieved under IDLE conditions; this is not at all surprising, but does point out that users will most likely show better results, as the average PC is not 100% stressed all the time.

It also points out that insulating the socket is of prime importance, as below ambient temps are very likely in the “Optimal Operating range”.

Results I found are consistent with Swiftech’s claims. Compared to other non-TEC assisted aircooled heatsinks in the Heatsink Ranking, the MCX462+T ™ obviously outperforms them.

I takes a LOT to deliver an effective, aircooled TEC heatsink for an AMD hotty. Swiftech’s MCX462+T ™ is an excellent example of what it takes – almost two pounds of metal, a 226 watt TEC and an 84 cfm fan.

The following reader Tips can get your AMD (or any CPU) substantially cooler with very little effort and expense; remember that adding a silver or copper base necessitates adjustment to the heatsink clip: Article from Chron USA: I’ve seen this