I received three responses from consumers who did not receive the highly polished version you see here, although performance was still very good.

Vantec sent me a production version to test out. Its base is highly polished compared to the earlier version – if you buy one of these and get something less than this, drop me a line. 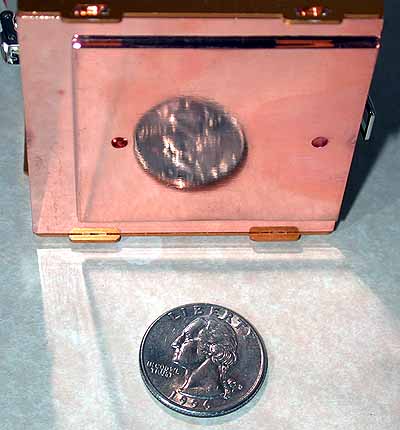 I did a quick test on the Iwill BD133 and found a marginal, but not statistically significant, improvement over the version I tested, so the results presented below are representative of its performance.

SUMMARY: The prototype of Vantec’s copper thin-fin heatsink is a very good performer – hopefully the production versions will be as well made. 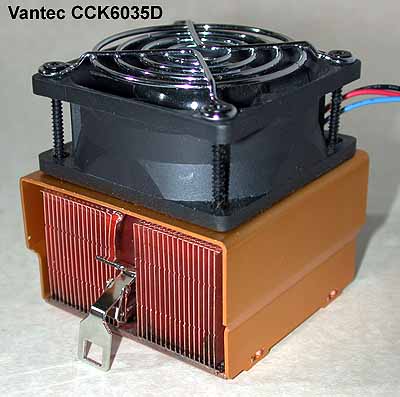 Crazy PC was kind enough to send over a prototype of Vantec’s latest heatsink, the CCK6035D. This looks like Vantec’s answer the the very successful, high performing Thermalright SK6. The first thing I noticed about the Vantec were the fins: 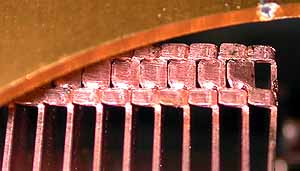 Top view of the fins.

The manufacturing process used in the Vantec looks exactly the same as that used for the SK6. As the pic above shows, the copper plates are mechanically linked to each other and soldered to the copper base. 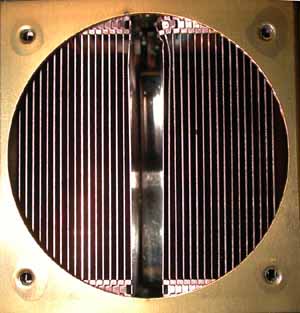 The base is not very thick – I measured it at 1/8″. It is relatively smooth and free from gross machining marks, although I think it could benefit from some very fine lapping: 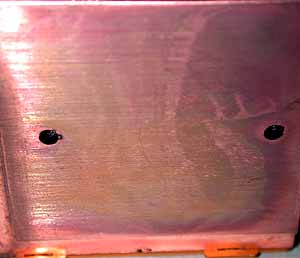 Manufacturers seem to be paying more attention to mounting ease – the clip on the Vantec is a very good one. It features an articulated hinge:

You engage the front lug with the clip extended, then snap it into place. The clip has a very nice platform so that you can easily grasp it without breaking your fingers.

All told, Vantec put together a solid product.

I prepared the Vantec by boring a hole completely through the base so I could epoxy a thermocouple above the CPU. The thermocouple is attached to an Omega HH23 Digital Thermometer. Ambient temps were measured with a thermocouple placed about 1 inch from the fan’s intake. I used Prime 95 to stress the CPU on an Iwill KK266, BD133 (MBM temps are on-die) and Abit KT7. Arctic Silver grease was used in all tests. CPU Case Temp is the temp at that point where the CPU contacts the heatsink, CPU Back Temps are measured by a thermocouple on the center back of the CPU.

Not too shabby – although clearly the Delta 38 screamer plays a large role in achieving these numbers. I ran another test to compare the Delta 38 with a YS Tech 26 cfm unit to show how large:

Whether the noise level is something you can live with (68 dBA for the Delta vs 62 dBA for the YS Tech, measured 8″ from the fan’s intake) is up to you, although more and more, users are complaining about excessive noise. However, the performance degradation with the quieter YS Tech removes it from the “acceptable” list for Socket A CPUs.

Tested C/Ws with the Delta 38 place the Vantec in the lower (=better) range of heatsinks with C/Ws of 0.3 or less.

A very good entry into the performance cooling market, the Vantec CCK6035D is worthy of serious consideration for Socket A/370 users looking for superior cooling performance. Good performance and easy to mount, the largest drawback is noise due to the Delta 38 fan. We will test the off-the-shelf version shortly.

Thanks again to Crazy PC for sending the prototype our way.